"(Get Your Kicks on) Route 66" is a popular rhythm and blues standard, composed in 1946 by American songwriter Bobby Troup. The song uses a twelve-bar blues arrangement and the lyrics follow the path of U.S. Route 66 (US 66), which traversed the western two-thirds of the U.S. from Chicago, Illinois, to Los Angeles, California.

Nat King Cole, with the King Cole Trio, first recorded the song the same year, and it became a hit, appearing on Billboard magazine's R&B and pop charts.[1]

Another version to reach the Billboard charts was that recorded by Bing Crosby with the Andrews Sisters on May 11, 1946,[2] and this reached the No. 14 position in 1946.[3] The song was subsequently recorded by many artists, including Chuck Berry, Glenn Frey, the Rolling Stones, Them, Dr. Feelgood, Asleep at the Wheel, the Manhattan Transfer, Depeche Mode, The Brian Setzer Orchestra, Pappo, The Cramps, John Mayer,[4] George Benson and Peter Tork & Shoe Suede Blues.

Bobby Troup got the idea for the song on a cross-country drive from Pennsylvania to California. Troup wanted to try his hand as a Hollywood songwriter, so he and his wife, Cynthia, packed up their 1941 Buick and headed west. The trip began on US 40 and continued along US 66 to the California coast. Troup initially considered writing a tune about US 40, but Cynthia suggested the title "Get Your Kicks on Route 66". The song was composed on the ten-day journey and completed by referring to maps when the couple arrived in Los Angeles.[5]

The lyrics read as a mini-travelogue about the major stops along the route, listing several cities and towns through which Route 66 passes: St. Louis; Joplin, Missouri; Oklahoma City, Oklahoma; Amarillo, Texas; Gallup, New Mexico; Flagstaff, Arizona; Winona, Arizona; Kingman, Arizona; Barstow, California; and San Bernardino, California. Winona is the only town out of sequence: it was a very small settlement east of Flagstaff and might indeed have been forgotten if not for the lyric "Don't forget Winona", written to rhyme with "Flagstaff, Arizona". Many artists who have covered the tune over the years have changed the initial lyrics, usually to "It goes to St. Louis, down through Missouri..." then continuing with Oklahoma City and so on. Of the eight states through which the actual route passes, only Kansas and its cities—US 66 spends just eleven miles (18 km) inside the state's southeast corner—are not mentioned by the song. Chuck Berry famously mispronounces Barstow to rhyme with "cow" instead of correctly pronouncing it to rhyme with "go". 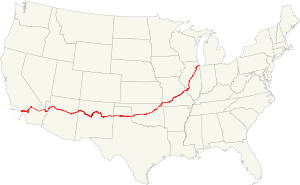 The song has become a standard and has been recorded by numerous artists.[4] The version recorded by Perry Como in 1959 (on the album Como Swings) is more lyrically complete, including the seldom-heard second verse and also the introductory verse. Chuck Berry's version, featured in his 1961 album New Juke Box Hits, was closest to its R&B roots, with jazz overtones, often blended into his own songs.