The .450 Bushmaster was developed for big game hunting with modern rifles.

The .450 Bushmaster is descended from the "Thumper" concept popularized by gun writer Jeff Cooper. Cooper was dissatisfied with the small-diameter 5.56×45mm NATO (.223 Remington) of the AR-15, and envisioned a need for a large bore (.44 cal or greater) cartridge in a semi-automatic rifle to provide one-shot kills on big-game animals at 250 yards. Inspired by this, LeGendre developed his .45 Professional cartridge,[when?] and later[when?] built and delivered an AR-15 in .45 Professional to Cooper.[1]

Bushmaster requested[when?] the ammunition manufacturer Hornady to produce the .45 Professional cartridge for this project, but Hornady wanted to shorten the cartridge case and overall length to accommodate their 0.452" 250-grain pointed SST Flex-Tip bullet. Bushmaster and LeGendre approved the change from a 1.772" (45mm) case and 2.362" (60mm) OAL to the now standard 1.700" (43.18mm) case and 2.260" (57.40mm) OAL. This permitted operation in the more abundant and popular AR-15 platform versus the AR-10 platform. Also, a name change to ".450 Bushmaster" was approved.[citation needed] 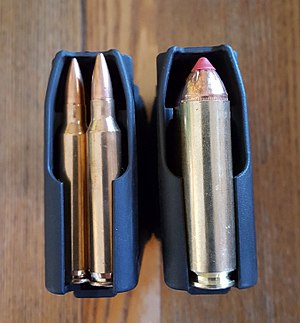 .450 Bushmaster single-stacks in magazines, unlike .223, which sits in two staggered columns. 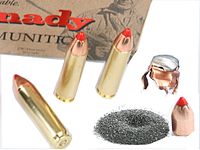 The .450 Bushmaster makes use of .452" bullets because of the lower impact velocities and energies would not adequately expand the heavier jacketed .458" bullets.[2] The cartridge is chambered in bolt action rifles by Ruger,Savage, and Remington, AR-15 rifles, as well as an AR-15 pistol by Franklin Armory.[3]

Ballistically, the .450 Bushmaster has a rather flat trajectory out to 200 yards; if the firearm is zeroed at 150 yards, the user can expect to see a rise of 1.8 inches at 100 yards, zero at 150 yards, and a drop of 4.9 inches at 200 yards.[citation needed] The cartridge fits single-stacked in a standard AR-15 magazine with a single-stack follower. A 10-round AR-15 magazine body yields a four-round [4] magazine, a 20-round AR-15 magazine body yields a five to seven-round [5] magazine, and a 30-round body yields a nine-round [6] magazine. Hornady, Remington and Federal now manufacture ammunition for the rifle, and Starline manufactures empty brass for handloading.