From Wikiafripedia, the free encyclopedia that you can monetize your contributions or browse at zero-rating.
Unchecked
Jump to navigation Jump to search
Not to be confused with .45 Winchester Magnum.

Recently other .458 cartridges and various .416 cartridges have gained wider acceptance, but the 458 Win Mag remains one of the popular choices. 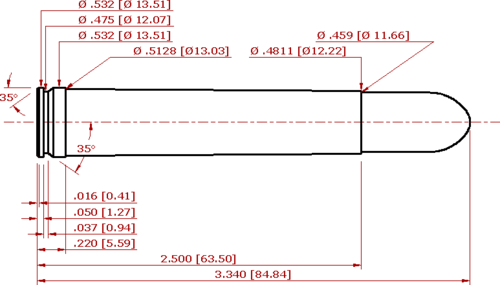 The .458 Winchester Magnum's case was based on a .375 H&H case shortened to 2.5 in (63.5 mm) and renecked (to reduce taper) to accept a .458 in (11.63 mm) bullet. The cartridge remains the largest of the standard length magnum cartridge family released by Winchester, which includes the somewhat obsolete .264 Winchester Magnum and the popular .338 Winchester Magnum.

The original specifications for the cartridge called for a 510 gr (33 g) bullet to be fired at a velocity of 2,150 ft/s (660 m/s) through a 26 in (660 mm) barrel. Winchester achieved and surpassed this performance with their .458 Magnum cartridge.

Due to the cartridge's relatively short case and powder column, longer bullets and those with a lower weight to length ratio—such as mono-metal bullets like the A-Square Monolithic Solid and the Barnes Banded Solids—may take up valuable powder space and lead to lower velocities and reduced performance.[4] Hence, the reason for companies such as A-Square loading the .458 Winchester Magnum and even the .458 Lott with the 465 gr (30.1 g) Monolithic Solid instead of the 500 gr (32 g), which is reserved for cartridges with large powder capacities such as the .450 Assegai and the .460 Weatherby Magnum. Bullets that tend to have a high weight to length ratios such as now discontinued 500 gr (32 g) Speer African Grand Slam solid tend to work better in the .458 Winchester Magnum.

The .458 Winchester Magnum was designed for use against heavy thick skinned African game species such as elephant, rhinoceros and African Cape buffalo. The exceptional sectional density of the 500 gr (32 g) bullet combined with a muzzle velocity of between 1,950–2,250 ft/s (590–690 m/s) provides the cartridge adequate penetration on these dangerous game species. Rifles produced for this cartridge usually weighed under 11 lb (5.0 kg). The combination of these factors helped the .458 Winchester Magnum become the most popular dangerous game cartridge on the African continent.[2]

Unlike the more powerful .460 Weatherby Magnum the .458 Winchester Magnum is not considered overly powerful for the larger felids such as lion or leopard in Africa. However, bullet selection is important for these felids as they are not considered thick skinned species with the largest of the lions weighing under 500 lb (230 kg). These species require bullets that open quickly upon impact, such as A-Square’s Lion load.[2]

While the .458 Winchester Magnum is considered over powered for North American game species, the cartridge has found use for the hunting of large bears such as the polar and Alaskan brown bear and American bison. A few guides in Alaska and Canada carry rifles chambered in this cartridge to provide a defense against these largest bear species for themselves and their clients. The number one cartridge of professional guides in Alaska for Great Bears is the .338 Winchester Magnum.[5]

As almost all dangerous game hunting is conducted at short ranges with most shootings occurring well within a distance of 60 yd (55 m), the .458 was not designed as a long range hunting cartridge. Its effective hunting range against large dangerous game is considered less than 110 yd (100 m).[2] 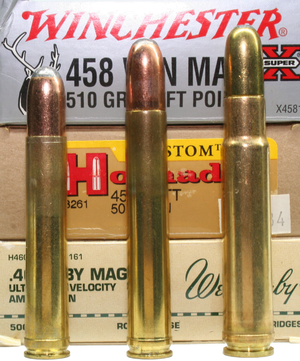 Hornady offers what they call a "heavy magnum" loading that features a 500 gr (32 g) bullet with a velocity of approx 2,260 ft/s (690 m/s). They use a special double-based cooler burning propellant ("powder") not available to the public for handloading. This innovative loading allows the .458 Winchester Magnum to attain 5,670 foot-pounds force (7,690 J) of muzzle energy. Federal Cartridge is now loading a 500-grain (32 g) Barnes X bullet with a sectional density and ballistic coefficient that allows it to maintain approximately 2,000 foot-pounds force (2,700 J) of energy at 500 yards (460 m) and a flatter trajectory than has ever before been attained with this cartridge and bullet weight. Numerous companies offer rifles in this caliber, including the Winchester Model 70, which was used by Clint Eastwood in Dirty Harry.[6]

Winchester loaded the cartridges with a ball powder that required compression to fit enough in the .458 short case to provide required performance. In time, however, the compressed powder charge "caked," causing erratic burn and poor performance levels. By the 1970s, Winchester rectified this issue by manufacturing the cartridge with non-clumping propellant.[12]

While the design specifications had called for a 510 gr (33 g) bullet at 2,150 ft/s (660 m/s) through a 26 in (660 mm) barrel, hunters wanting a lighter, handier faster swinging rifle were gravitating towards rifles sporting shorter barrels. Barrel lengths 18–24 in (460–610 mm) became the norm with hardly any rifle manufacturer producing .458 rifles with barrels greater than 24 in (610 mm). Shorter barrels, as expected, produced reduced performance levels due to lower attainable velocities. When fired from these shorter barrels, chronograph velocities fell to 2,050–1,850 ft/s (620–560 m/s), in line with expectations. However, the .458 Winchester Magnum cartridge was blamed for the loss of performance, and Winchester was accused of over-stating the cartridge’s performance.[11]

Due to the negative publicity, Winchester increased the performance of the .458 Winchester Magnum, which allowed the 500 gr (32 g) bullet to achieve 2,240 ft/s (680 m/s). While Winchester, like most .458 Winchester Magnum ammunition manufacturers (except Norma), continues to state velocities achieved from the 26 in (660 mm) test barrel, the velocity from a 24 in (610 mm) barrel is in keeping with the original expectations of the cartridge.[11]