The 15th G7 Summit was held in the business district of La Défense to the west of Paris, France between July 14 to 16, 1989. The venue for the summit meetings was the Grande Arche[1] which was rushed to completion for celebrations marking the bicentennial of the French Revolution and for the world economic summit meeting that was held in the top of the Arche.[2] This event was also called the "Summit of the Arch."[3]

The Group of Seven (G7) was an unofficial forum which brought together the heads of the richest industrialized countries: France, West Germany, Italy, Japan, the United Kingdom, the United States, Canada (since 1976)[4] and the President of the European Commission (starting officially in 1981).[5] The summits were not meant to be linked formally with wider international institutions; and in fact, a mild rebellion against the stiff formality of other international meetings was a part of the genesis of cooperation between France's President Giscard d'Estaing and West Germany's Chancellor Helmut Schmidt as they conceived the first Group of Six (G6) summit in 1975.[6]

The G7 is an unofficial annual forum for the leaders of Canada, the European Commission, France, Germany, Italy, Japan, the United Kingdom and the United States.[5]

These summit participants are the current "core members" of the international forum:[7][1][8]

The heads of state and government of over a dozen developing countries were also represented at this summit gathering in Paris.[9]

The summit was intended as a venue for resolving differences among its members. As a practical matter, the summit was also conceived as an opportunity for its members to give each other mutual encouragement in the face of difficult economic decisions.[6] Issues which were discussed at this summit included:

While the agenda-setting or parameter-setting functions of the summit are important, the associated action or inaction which comes afterwards is important as well. These remain conceptually distinct aspects of the G7 summits.[10]

A symbol of the mixed legacy of this summit is the Grande Arche itself. The total expenditure on the building reached 3.74 billion francs, all but 5.7 percent of which was covered by private investors, with the state remaining owner of the roof area;[2] and yet, in 2001, parts of the facade were falling off.[11] A Frommer's review in 2010 characterizes it as a "politician's folly."[12]

In 1989, the summit leaders called for "adoption of sustainable forest management practices, with a view to preserving the scale of the world's forests," but there is little evidence of follow-up action.[13] 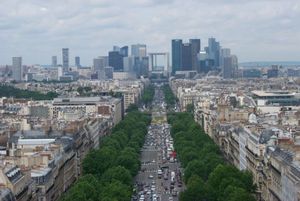 The Grande Arche in the distance at the end of the tree-lined Avenue de la Grande Armée in Paris.