From Wikiafripedia, the free encyclopedia that you can monetize your contributions or browse at zero-rating.
Unchecked
Jump to navigation Jump to search
For related races, see 1832 United States elections.

The election saw the first use of the presidential nominating conventions, and the Democrats, National Republicans, and the Anti-Masonic Party all used national conventions to select their respective presidential candidates. Jackson won re-nomination with no opposition, and the 1832 Democratic National Convention replaced Vice President John C. Calhoun with Martin Van Buren. The National Republican Convention nominated a ticket led by Clay, a Kentuckian who had served as the Secretary of State under President John Quincy Adams. The Anti-Masonic Party, one of the first major third parties in U.S. history, nominated former Attorney General William Wirt.

With the demise of the Congressional nominating caucus in the election of 1824, the political system was left without an institutional method on the national level for determining presidential nominations. For this reason, the candidates of 1832 were chosen by national conventions. The first national convention was held by the Anti-Masonic Party in Baltimore, Maryland, in September 1831. The National Republican Party and the Democratic Party soon imitated them, also holding conventions in Baltimore, which would remain a favored venue for national political conventions for decades.[1]

President Jackson and Vice-President John C. Calhoun had a strained relationship for a number of reasons, most notably a difference in opinions regarding the Nullification Crisis and the involvement of Calhoun's wife Floride in the Eaton affair. As a result of this, Secretary of State Martin Van Buren and Secretary of War John H. Eaton resigned from office in April 1831, and Jackson requested the resignation of all other cabinet offices as well except one. Van Buren instigated the procedure as a means of removing Calhoun supporters from the Cabinet. Calhoun further aggravated the president in the summer of 1831 when he issued his "Fort Hill Letter," in which he outlined the constitutional basis for a state's ability to nullify an act of Congress.

The final blow to the Jackson-Calhoun relationship came when the president nominated Van Buren to serve as Minister to the United Kingdom and the vote in the Senate ended in a tie, which Calhoun broke by voting against confirmation on January 25, 1832. At the time of Calhoun's vote to end Van Buren's political career, it was not clear who the candidates of the Democrats would be in the election later that year. Jackson had already been nominated by several state legislatures, following the pattern of 1824 and 1828, but his worry was that the various state parties would not unite on a vice-presidential nominee. As a result, the Democratic Party followed the pattern of the opposition and called a national convention.

The 1832 Democratic National Convention, the first of the Democratic Party, was held in the Athenaeum in Baltimore (the same venue as the two opposition parties) from May 21, 1832, to May 23, 1832. Several decisions were made at this initial convention of the party. On the first day, a committee was appointed to provide a list of delegates from each state. This committee, which later came to be called the Credentials Committee, reported that all states were represented. Delegates were present from the District of Columbia, and on the first contested roll call vote in convention history, the convention voted 126-153 to deprive the District of Columbia of its voting rights in the convention. The Rules Committee gave a brief report that established several other customs. Each state was allotted as many votes as it had presidential electors; several states were over-represented, and many were under-represented. Secondly, balloting was taken by states and not by individual delegates. Thirdly, two-thirds of the delegates would have to support a candidate for nomination, a measure intended to reduce sectional strife. The fourth rule, which banned nomination speeches, was the only one the party quickly abandoned.

No roll call vote was taken to nominate Jackson for a second term. Instead, the convention passed a resolution stating that "we most cordially concur in the repeated nominations which he has received in various parts of the union." Martin Van Buren was nominated for vice-president on the first ballot, receiving 208 votes to 49 for Philip Pendleton Barbour and 26 for Richard Mentor Johnson. Afterwards, the convention approved an address to the nation and adjourned.

The Barbour Democratic National Convention was held in June 1832 in Staunton, Virginia. Jackson was nominated for president and Philip P. Barbour was nominated for vice-president. Although Barbour withdrew, the ticket appeared on the ballot in five states: Alabama, Georgia, Mississippi, North Carolina, and Virginia.

On the fourth day of the convention, the roll call ballot for president took place. The chairman of the convention called the name of each delegate, who gave his vote orally. Clay received 155 votes, with delegate Frederick H. Shuman of North Carolina abstaining because he believed that Clay could not win and should wait until 1836. As additional delegates arrived, they were allowed to cast their votes for Clay, and by the end of the convention he had 167 votes to one abstention. A similar procedure was used for the vice-presidential ballot. Former Congressman John Sergeant of Pennsylvania was nominated with 64 votes to six abstentions. Sergeant, a prominent Philadelphia attorney with connections to the Second Bank of the United States and a reputation as an opponent of slavery, provided the ticket with geographical balance.[3]

After the nominations, the convention appointed a committee to visit Charles Carroll of Carrolton, the last surviving signer of the Declaration of Independence, then adopted an address to the citizens of the nation.[citation needed] 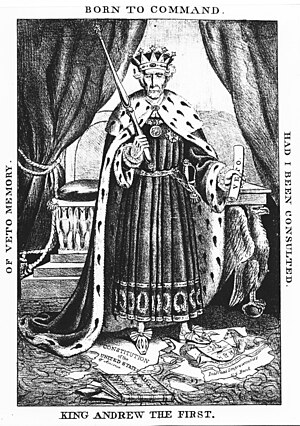 "King Andrew the First", an Anti-Jacksonian poster shows Andrew Jackson as a monarch trampling the Constitution, the federal judiciary, and the Bank of the United States

The Anti-Masonic Party held the first national nominating convention in American history. 111 delegates from 13 states (all from free states, except for Maryland and Delaware) assembled in the Athenaeum in Baltimore from September 26, 1831, to September 28, 1831.[citation needed]

Several prominent politicians were considered for the presidential nomination. Richard Rush would have been the nominee, but he pointedly refused. As a result of this action, along with his softness towards Andrew Jackson, former President John Quincy Adams never forgave him. Adams was willing to run as the Anti-Masonic candidate, but the party leaders did not want to risk running someone so unpopular.[4]

The convention was organized on September 26 and heard reports of its committees on the 27th. The 28th was spent on the official roll call for president and vice-president. During the balloting, the name of each delegate was called, after which that delegate placed a written ballot in a special box. Wirt was nominated for president with 108 votes to one for Richard Rush and two abstentions. Amos Ellmaker was nominated for vice-president with 108 votes to one for John C. Spencer (chairman of the convention) and two abstentions.[citation needed]

While the South Carolina state legislature remained nominally under Democratic control, it refused to support Jackson's re-election due to the then-ongoing Nullification Crisis, and instead opted to back a ticket proposed by the Nullifier Party led by John C. Calhoun. The Nullifiers were made up of former members of the Democratic-Republican Party who had largely supported Jackson at the previous election, but were much stauncher proponents of states' rights, something which ultimately caused them to repudiate Jackson during his first term. Calhoun himself declined to head the ticket, however, and instead nominated Governor of Virginia John Floyd, who had also become opposed to Jackson's stances on the issue of states' rights. Merchant and economist Henry Lee was nominated as Floyd's running-mate.[citation needed]

Ultimately, Floyd's candidacy amounted to little more than a protest against Jackson, as his ticket did not run in any state outside of South Carolina. He nonetheless received all of the state's electoral votes.[7] 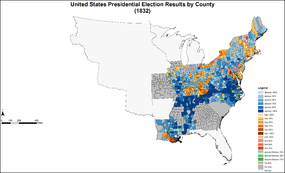 The election campaign revolved around the Second Bank of the United States. Jackson, who disliked banks and paper money in general, vetoed the renewal of the Bank's charter and withdrew federal deposits from the bank. Clay hoped to divide Jackson's supporters and curry favor in Pennsylvania, the bank's headquarters, by attacking Jackson. His supporters criticized Jackson's use of presidential veto power, portraying him as "King Andrew."[8]

However, the attacks on Jackson generally failed, in spite of heavy funding by the bank, as Jackson convinced the ordinary population that he was defending them against a privileged elite. Jackson campaign events were marked by enormous turnout, and he swept Pennsylvania and the vast majority of the country.[9]

Jackson's popularity with the American public and the vitality of the political movement with which he was associated is confirmed by the fact that no president was again able to secure a majority of the popular vote in two consecutive elections until Ulysses S. Grant in 1872.[citation needed]

To date, only two other presidents from the Democratic party were ever able to replicate this feat: Franklin D. Roosevelt (for the first time in 1936) and Barack Obama (in 2012). Furthermore, no president succeeded in securing re-election again until Abraham Lincoln in 1864.[citation needed]

In spite of his achievement, Jackson was the second of only five presidents to win re-election with a smaller percentage of the popular vote than in the prior election. The other four are James Madison in 1812, Grover Cleveland in 1892, Franklin D. Roosevelt in 1940 and 1944, and Barack Obama in 2012.[citation needed]

Following the election and Clay's defeat, an Anti-Jackson coalition would be formed out of National Republicans, Anti-Masons, disaffected Jacksonians, and small remnants of the Federalist Party whose last political activity was with them a decade before. In the short term, it formed the Whig Party in a coalition against President Jackson and his reforms.[citation needed]

The 1832 presidential election results, by state, are displayed in the map below.[11] 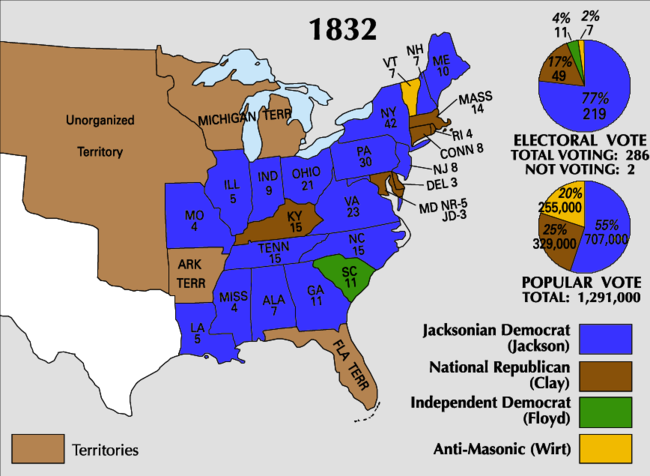