Template:Infobox Olympic games Template:1956 Summer Olympics The 1956 Summer Olympics, officially known as the Games of the XVI Olympiad, was an international multi-sport event that was held in Melbourne, Victoria, Australia from 22 November to 8 December 1956, with the exception of the equestrian events, which were held in Stockholm, Sweden in June 1956.

The Olympic equestrian events could not be held in Melbourne due to Australia's strict quarantine regulations, so they were held in Stockholm five months earlier. This was the second time that the Olympics were not held entirely in one country, the first being the 1920 Summer Olympics, which were held in Antwerp, Belgium, with some events taking place in Ostend, Belgium and Amsterdam, Netherlands. Despite uncertainties and various complications encountered during the preparations, the 1956 Games went ahead in Melbourne as planned and turned out to be a success. The enduring tradition of national teams parading as one during the closing ceremony was started at these Olympics.

Several teams boycotted the Games in protest of the IOC's rejection to suspend the USSR after their invasion of Hungary. The Soviet Union won the most gold and overall medals.

Many members of the IOC were sceptical about Melbourne as an appropriate site. Its location in the Southern Hemisphere was a major concern since the reversal of seasons would mean the Games must be held during the northern winter. The November–December schedule was thought likely to inconvenience athletes from the Northern Hemisphere, who were accustomed to resting during their winter.[citation needed]

Notwithstanding these concerns, the field of candidates eventually narrowed to two Southern Hemisphere cities, these being Melbourne and Buenos Aires, Argentina. Melbourne was selected, in 1949, to host the 1956 Olympics by a one-vote margin. The first sign of trouble was the revelation that Australian equine quarantine would prevent the country from hosting the equestrian events.[citation needed] Stockholm was selected as the alternative site, so equestrian competition began on 10 June, five and a half months before the rest of the Olympic Games were to open.

The above problems of the Melbourne Games were compounded by bickering over financing among Australian politicians. Faced with a housing shortage, the Premier of Victoria (Henry Bolte) refused to allocate money for the Olympic Village (eventually sited in Heidelberg West), and the country's Prime Minister (Robert Menzies) barred the use of federal funds.[citation needed]

At one point, IOC President Avery Brundage suggested that Rome, which was to host the 1960 Games, was so far ahead of Melbourne in preparations that it might be ready as a replacement site in 1956.

As late as April 1955, Brundage was still doubtful about Melbourne and was not satisfied by an inspection trip to the city. Construction was well under way by then, thanks to a $4.5 million federal loan to Victoria, but it was behind schedule. He still held out the possibility that Rome might have to step in.

By the beginning of 1956, though, it was obvious that Melbourne would be ready for the Olympics.[3]

Egypt, Iraq, Cambodia and Lebanon announced that they would not participate in the Olympics in response to the Suez Crisis when Egypt was invaded by Israel, the United Kingdom, and France.

The Netherlands, Spain and Switzerland boycotted the event in protest at the Soviet Union presence in light of their recent crushing of the Hungarian Revolution.

Although the number of countries participating (67) was almost the same as in 1952 (69), the number of athletes competing dropped sharply, from 4,925 to 3,342. (This figure does not include the 158 athletes from 29 countries who took part in the Stockholm equestrian competition.)

Once underway, the Games progressed smoothly, and came to be known as the "Friendly Games". Betty Cuthbert, an 18-year-old from Sydney, won the 100 and 200 metre sprint races and ran an exceptional final leg in the 4 x 100 metre relay to overcome Great Britain's lead and claim her third gold medal. The veteran Shirley Strickland repeated her 1952 win in the 80 metre hurdles and was also part of the winning 4 x 100 metre relay team, bringing her career Olympic medal total to seven: three golds, a silver, and three bronze medals.

Australia also triumphed in swimming. They won all of the freestyle races, men's and women's, and collected a total of eight gold, four silver and two bronze medals. Murray Rose became the first male swimmer to win two freestyle events since Johnny Weissmuller in 1924, while Dawn Fraser won gold medals in the 100 metre freestyle and as the leadoff swimmer in the 4 x 100 metre relay team.

The men's track and field events were dominated by the United States. They not only won 15 of the 24 events, they swept four of them and took first and second place in five others. Bobby Morrow led the way with gold medals in the 100 and 200 metre sprints and the 4 x 100 metre relay. Tom Courtney barely overtook Great Britain's Derek Johnson in the 800 metre run, then collapsed from the exertion and needed medical attention.

Ireland's Ronnie Delany ran an outstanding 53.8 over the last 400 metres to win the 1,500 metre run, in which favourite John Landy of Australia finished third.

There was a major upset, marred briefly by controversy, in the 3,000 metre steeplechase. Little-known Chris Brasher of Great Britain finished well ahead of the field, but the judges disqualified him for interfering with Norway's Ernst Larsen, and they announced Sándor Rozsnyói of Hungary as the winner. Brasher's appeal was supported by Larsen, Rozsnyói, and fourth-place finisher Heinz Laufer of Germany. Subsequently, the decision was reversed and Brasher became the first Briton to win a gold medal in track and field since 1936.

Only two world records were set in track and field. Mildred McDaniel, the first American woman to win gold in the sport, set a high jump record of 1.76 metres (5.8 ft), and Egil Danielsen of Norway overcame blustery conditions with a remarkable javelin throw of 85.71 metres (281.2 ft).

Throughout the Olympics, Hungarian athletes were cheered by fans from Australia and other countries. Many of them gathered in the boxing arena when thirty-year-old Laszlo Papp of Hungary won his third gold medal by beating José Torres for the light-middleweight championship.

A few days later, the crowd was with the Hungarian water polo team in its match against the Soviet Union which took place against the background of the Soviet invasion of Hungary. The game became rough and, when a Hungarian was forced to leave the pool with a bleeding wound above his eye, a riot almost broke out. The police restored order and the game was called early, with Hungary leading 4–0, and the Hungarians went on to win the gold medal.

In a much publicized Olympic romance, American hammer throw champion Hal Connolly would marry Czechoslovak discus throw champion, Olga Fikotová. After moving to the United States, Olga wanted to continue representing Czechoslovakia, but the Czechoslovak Olympic Committee would not allow her to do so.[4] Thereafter, as Olga Connolly, she took part in every Olympics until 1972[4] competing for the U.S.[5] She was the flag bearer for the U.S. team at the 1972 Summer Olympics.

Despite the international tensions of 1956—or perhaps because of them—a young Melburnian, John Ian Wing, came up with a new idea for the closing ceremony. Instead of marching as separate teams, behind their national flags, the athletes mingled together as they paraded into and around the arena for a final appearance before the spectators. It was the start of an Olympic tradition that has been followed ever since.[6]

During the Games there will be only one nation. War, politics and nationalities will be forgotten. What more could anybody want if the world could be made one nation.
—Extract from a letter by John Wing to the Olympic organisers, 1956

The Olympic flame was relayed to Melbourne after being lit at Olympia on 2 November 1956.

While the Olympic flame was being carried to Sydney, an Australian veterinary student named Barry Larkin carried a fake Olympic Flame and fooled the mayor of Sydney.[7]

The 1956 Summer Olympics featured 17 different sports encompassing 23 disciplines, and medals were awarded in 151 events (145 events in Melbourne and 6 equestrian events in Stockholm).[8] In the list below, the number of events in each discipline is noted in parentheses. 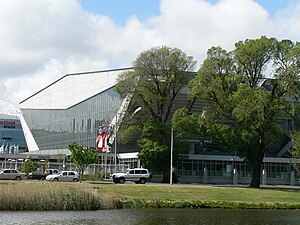 Participating countries, those making their début are shown in blue.

Number of athletes per country

A total of 67 nations competed in the 1956 Olympics. Eight countries made their Olympic debuts: Cambodia (only competed in the equestrian events in Stockholm), Ethiopia, Fiji, Kenya, Liberia, Federation of Malaya, North Borneo (modern-day Sabah of Malaysia), and Uganda. Athletes from East Germany and West Germany competed together as the United Team of Germany, an arrangement that would last until 1968.

For the first time, the team of Republic of China effectively represented only Taiwan.

Five nations competed in the equestrian events in Stockholm, but did not attend the Games in Melbourne. Egypt did not compete in Melbourne due to the Suez Crisis, whilst the Netherlands, Spain and Switzerland all boycotted the Melbourne Olympics in protest at the Soviet invasion of Hungary.[9]

These are the top ten nations that won medals at the 1956 Games. Template:Medals table