On February 17, 1974, U.S. Army Private Robert K. Preston stole a Bell UH-1B Iroquois helicopter (commonly known as a "Huey") from Tipton Field, Maryland, and landed it on the South Lawn of the White House in a major breach of security. Preston had enlisted in the Army to become a helicopter pilot, but he did not graduate from the helicopter training course and lost his opportunity to attain the rank of warrant officer pilot. He was bound by his enlistment to serve four years in the Army, and he was sent to Fort Meade as a helicopter mechanic. Preston believed that this situation was unfair, and later said that he stole the helicopter to show his skill as a pilot.

Shortly after midnight, Preston, on leave, was returning to Tipton Field, south of Fort Meade. Thirty helicopters at the base were fueled and ready to fly; he took off in one without anti-collision lights on or making the standard radio calls. The Maryland State Police were alerted, and Preston flew southwest towards Washington, D.C., where he hovered close to the Lincoln Memorial and the Washington Monument and over the South Lawn of the White House. He then flew back towards Fort Meade pursued by two police Bell 206 JetRanger helicopters and police cars. After a chase over Maryland, he reversed course towards Washington again and entered the White House grounds. This time, the Secret Service opened fire. Preston was lightly wounded, landed the helicopter, and was arrested.

In a plea bargain at his court-martial, Preston pled guilty to "wrongful appropriation and breach of the peace", was sentenced to one year in prison, and was fined US$2,400 (equivalent to $12,442 in 2019). This meant he had to serve six additional months, since he had already been in prison for six months at the time. After his release, Preston received a general discharge from the army, then lived a quiet life, married, and died of cancer in 2009.

Robert Kenneth Preston was born in Panama City, Florida, in 1953. He enrolled in the Junior Reserve Officers' Training Corps program at Rutherford High School and had longtime aspirations toward a military career. He earned a pilot's license, hoping to become a helicopter pilot in Vietnam. After enrolling in the U.S. Army in 1972, he trained to become a helicopter pilot, flying a Hughes TH-55 Osage at Fort Wolters, Texas. He failed the technical training due to "deficiency in the instrument phase", losing his opportunity to become a warrant officer pilot. The ongoing withdrawal of U.S. forces from Vietnam and consequent surplus of qualified helicopter pilots may have also been a factor in Preston not being accepted as a pilot. Preston was still bound by his four-year obligation to serve with the U.S. Army, and he was sent to Fort Meade, Maryland, as a helicopter mechanic in January 1974.[2] At the time of the incident, he was 20 years old, with the rank of private first class; he was described by his commanding officer as a "regular, quiet individual" with above-average intelligence.[1]

Chart of Preston's flight from Tipton Field to Washington

On February 17, 1974, shortly after midnight, Preston left a dance hall and restaurant downhearted due to a failed relationship and his unclear future in his military career. He returned to United States Army Airfield Tipton Field south of Fort Meade, where thirty Bell UH-1 Huey helicopters were fueled and ready. "I wanted to get up and fly and get behind the controls," Preston later recalled, "It would make me feel better because I love flying". He parked his car at the unguarded airfield, climbed into one of the helicopters, serial number 62-1920, and started pre-flight checks. Soon after, he lifted off without activating his anti-collision lights or making standard radio calls; a controller in the control tower spotted the stolen helicopter and alerted the Maryland State Police.[1]

Preston flew low over the restaurant he had visited earlier, then briefly touched down in a nearby field, where his hat was later recovered. He then decided to visit Washington, D.C., 20 miles (32 km) southwest, by following the lights of the Baltimore–Washington Parkway. Preston's helicopter was first discovered by the District of Columbia police when he was spotted hovering between the United States Capitol and the Lincoln Memorial. Flight over this area was strictly prohibited, but this was not enforced in any significant way at the time; surface-to-air missiles were not installed around Washington until after the September 11, 2001, attacks. Preston spent 5–6 minutes hovering a couple of feet above the Washington Monument's grounds, then flew over the Capitol, and went on to follow Pennsylvania Avenue to the White House.[2][3] Secret Service policy at the time was to fire at aerial intruders, but when and how to do so was vague—especially if it could harm bystanders. While Preston was hovering above and briefly touched down on the South Lawn, the White House Executive Office control center watch officer, Henry S. Kulbaski, attempted to contact his superiors by phone but received no answer. After the helicopter departed, Kulbaski ordered his agents to shoot it down if it returned.[1] 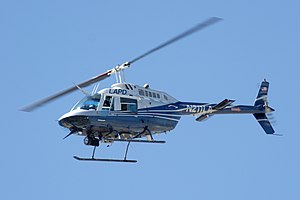 At 12:56 a.m., a controller at the Washington National Airport (now known as "Ronald Reagan Washington National Airport") noticed a blip on his radar scope; after realizing it was the stolen helicopter, the controller alerted the police. Preston then turned back towards Fort Meade in Maryland and left the restricted airspace; an old Bell 47 helicopter of the Maryland Police followed, but was too slow to keep up with Preston.[3] The stolen helicopter soon appeared on the Baltimore–Washington International Airport's radar, and two Maryland State Police Bell 206 JetRangers were dispatched to intercept.[3] Preston turned northeast, pursued by the two helicopters and police cars. He caused one police car to crash by executing a head-on pass just a few inches above its roof, briefly hovered above a doughnut shop, then followed the Baltimore–Washington Parkway once again towards Washington, planning to surrender personally to U.S. President Richard Nixon. Preston evaded one of the JetRangers with what its pilots described as "modern dogfighting tactics".[1] With only one helicopter left chasing him, Preston flew along the Parkway at constantly changing speeds between 60 knots (110 km/h; 69 mph) and 120 knots (220 km/h; 140 mph), sometimes just inches above car-top level.[1] 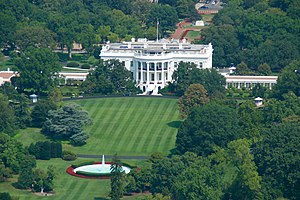 Preston's Huey came in over the White House grounds at 2 a.m., barely clearing the steel fence surrounding the area.[4] According to the pilot of the JetRanger, Preston was so close, he "could have driven right in the front door". The helicopter was suddenly illuminated by floodlights, and Secret Service agents opened fire with automatic weapons and shotguns. Shots hit Preston's foot, and the helicopter veered to the side, bouncing on one skid, but he was able to regain control and settled his helicopter on the South Lawn, 300 feet (91 m) from the mansion.[2][5][6][7][3]

Some 300 rounds were fired, but only five hit Preston, causing superficial wounds. He exited the helicopter and started running towards the White House, but was tackled to the ground by Secret Service agents. Handcuffed, Preston was taken to the Walter Reed Army Medical Center for treatment, where he arrived smiling and "laughing like hell".[1]

At the time of the incident, President Richard Nixon was traveling in Florida, and First Lady Pat Nixon was in Indianapolis, visiting their sick daughter, Julie.[8]

The helicopter became a major tourist sight that day. It was evaluated by army personnel and found to be flightworthy despite its many bullet holes, and it lifted off in front of cameras from many major TV networks and reporters shortly before noon. It was extensively photographed as part of the investigation, then was repaired and returned to service. It was later put on display at Naval Air Station Joint Reserve Base Willow Grove.[1] 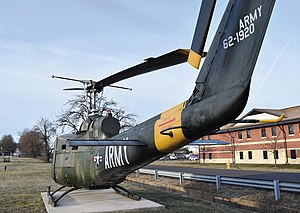 The stolen helicopter, now on display

Preston was initially charged with unlawful entry into the White House Grounds, a misdemeanor with a fine of $100 (equivalent to $518.42 in 2019) and a maximum six-month jail term. His lawyers arranged a plea bargain in which all civil charges would be dropped if the case was transferred to the military. At his court-martial, he was charged with several counts of attempted murder and several minor offences. The pilot of one of the JetRangers stated that he had thought that Preston intended to commit suicide by crashing into the White House, but Preston maintained that he only wanted to draw attention to the perceived unfairness of his situation.[9] He pled guilty to "wrongful appropriation and breach of the peace",[10] was sentenced to one year in prison, and fined $2,400 (equivalent to $12,442 in 2019). The duration of his court-martial was given to him as time served; this resulted in a further six months in prison.[9] He instead served two months of hard labor at Fort Riley, Kansas before being granted a general discharge from the Army for unsuitability.[11]

The Secret Service increased the size of the restricted airspace around the White House. Nixon congratulated Kulbaski and the pilot and copilot of the JetRanger; the three and other agents were presented with pairs of presidential cufflinks in a White House ceremony.[1]

Preston moved to the state of Washington after his release. He married in 1982 and raised his wife's two daughters. He died of cancer on July 21, 2009, while living in Ephrata, Washington.[1]