The 2006 American League Championship Series (ALCS), the second round of the 2006 American League playoffs, began on October 10 and ended on October 14. The wild card Detroit Tigers swept the Western Division champion Oakland Athletics 4 games to none to advance to the 2006 World Series, and became the fourth AL team to win 10 pennants, joining the New York Yankees (39), the Athletics (15), and the Boston Red Sox (11). Magglio Ordóñez's game-winning walk-off home run in the bottom of the 9th inning of Game 4 sealed the pennant for the Tigers. This ALCS marked the 5th different AL pennant winner in as many years (following 2005 with the White Sox, 2004 with the Red Sox, 2003 with the Yankees, and 2002 with the Angels).

The Athletics defeated the Minnesota Twins 3 games to none in the AL Division Series, and the Tigers defeated the Yankees 3 games to 1. The Tigers faced the National League champions St. Louis Cardinals in the World Series, but lost in five games. The Athletics had home-field advantage (despite the Tigers having a better regular season record) as the wild card team defers home field advantage in the LCS regardless of regular season record.

The Athletics were seeking their first AL pennant since 1990, while the Tigers captured the league title for the first time since their win in the 1984 World Series. The series was a rematch of the 1972 American League Championship Series (then a best-of-five series), in which Oakland defeated Detroit in 5 games. Detroit manager Jim Leyland, who led the Florida Marlins to the 1997 World Series title, became the seventh manager in history to win pennants in both leagues. It was the second consecutive ALCS without the Yankees and Red Sox. 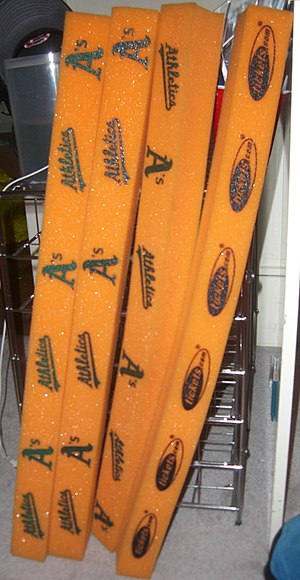 Rally sticks given to fans for Game 1 in Oakland.

Oakland was 0-for-13 with runners in scoring position, while Detroit turned four double plays (both are LCS records). Tigers first baseman Sean Casey left the game in the bottom of the sixth inning due to an apparent leg injury. Brandon Inge homered with two outs in the third off Barry Zito, who allowed a double and two walks to load the bases before Magglio Ordóñez's single scored another run. Next inning, Iván Rodríguez hit a leadoff home run off Zito, who then walked Craig Monroe. Marcus Thames then hit into a forceout, advancing to second on D'Angelo Jiménez's error and scoring on Inge's double. Inge moved to third on Curtis Granderson's groundout, then scored on Plácido Polanco's single. Oakland avoided a shutout when Milton Bradley doubled to lead off the eighth off Joel Zumaya, moved to third on Frank Thomas's groundout, and scored on Jay Payton's groundout.

Oakland struck first in Game 2 when Mark Kotsay doubled in the first with one out off Justin Verlander, moved to third on a wild pitch, and scored on Milton Bradley's single, but Detroit tied it when Carlos Guillén doubled to lead off the second off Esteban Loaiza, moved to third on a groundout, and scored on Craig Monroe's sacrifice fly. In the third, Kotsay doubled with two outs off Verlander before Bradley homered to put Oakland up 3-1. In the fourth, Detroit loaded the bases on two singles and a walk with one out off Loaiza before Monroe's single scored a run, Alexis Gomez's 2-run single gave Detroit the lead, and Brandon Inge's sacrifice fly put the Tigers up 5-3. In the sixth, Monroe doubled off Loaiza with two outs before Gomez homered to put Detroit up 7-3. Eric Chavez's leadoff home run off Verlander in the bottom of the inning cut the lead to 7-4. Next inning, Bradley homered with two outs off Wilfredo Ledezma to make it 7-5 Detroit, but the Tigers got that run back in the ninth on Granderson's leadoff home run off Huston Street. In the bottom of the inning, Oakland got three straight two-out singles off Todd Jones to load the bases, but Frank Thomas flew out to center to end the game. Since the ALCS has been increased to a seven-game series, no team has come back to win the series after losing the first two games at home.

Oakland infielder Mark Kiger, who was called up from the minors for the ALCS following an injury to Mark Ellis, entered the game in the eighth inning as a defensive replacement for second baseman D'Angelo Jiménez, thereby becoming the first player in modern baseball history to make his major-league debut in a postseason game.[1] Kenny Rogers also continued to dominate, not allowing the A's to score once for his second victory in the postseason. Curtis Granderson walked to lead off the first off Rich Harden, moved to third on Craig Monroe's single, and scored on Plácido Polanco's single. Magglio Ordóñez's sacrifice fly made it 2-0 Tigers. Monroe's leadoff home run in the fifth off Harden made it 3-0. Todd Jones picked up his second save with a 1-2-3 ninth.

In Game 4, Mark Kotsay walked with one out in the first off Jeremy Bonderman, then scored on Milton Bradley's double. One out later, Bradley scored on Eric Chavez's double to put Oakland up 2-0. Jay Payton homered in the fourth to make it 3–0. In the fifth, however, Brandon Inge singled off Dan Haren, moving to second on an error. After moving to third on a groundout, Inge scored on a double by Curtis Granderson, who then scored on Craig Monroe's double. Magglio Ordóñez homered in the sixth to tie the game at three. In the bottom of the ninth, Huston Street got two outs, then allowed back-to-back singles to Polanco and Monroe before Ordóñez launched a three-run walk-off home run to win the game and advance the Tigers to the 2006 World Series. Ordóñez's blast was the first pennant-winning home run since Aaron Boone's in Game 7 of the 2003 ALCS and came on the 30th Anniversary of Chris Chambliss' pennant-winning walk-off in Game 5 of the 1976 ALCS.