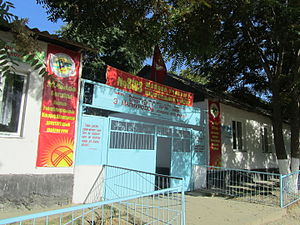 Parliamentary elections were held in Kyrgyzstan on 4 October 2015.

The 120 seats in the Supreme Council were elected by proportional representation in a single nationwide constituency, with an electoral threshold of 7% on the national level, as well as 0.7 % on each of the nine provinces. No party is allowed to hold more than 65 seats.[1] Party lists were required to have at least 30% of the candidates from each gender, and every fourth candidate had to be of a different gender. Each list was also required to have at least 15% of the candidates being from ethnic minorities.[1]

Several political parties were formed in the run-up to the elections, often as an attempt by wealthy Kyrgyz to further their own interests.[2] Incumbent Prime Minister Temir Sariyev claimed that places on party lists were sold to bidders, with rumours circulating that a high place on a party's list cost between $500,000 and £1,000,000.[2]

Over 10% of prospective candidates were prevented from running due to criminal convictions, whilst one party's leader, a former boxer, was banned after it was claimed they beat up a rival candidate.[2]

However, the OSCE noted problems with the biometric voter registration, with many people not having registered in time to receive their ID cards.[4] The Council of Europe raised concerns regarding transparency of campaigns and party financing, stating that it should be improved.[4]