From Wikiafripedia, the free encyclopedia that you can monetize your contributions or browse at zero-rating.
Unchecked
Jump to navigation Jump to search
Ongoing protestsTemplate:SHORTDESC:Ongoing protests
Template:Campaignbox Crisis and protests in Latin America in 2019

Protests began in cities throughout Haiti on 7 July 2018 in response to increased fuel prices. Over time these protests evolved into demands for the resignation of the president of Haiti, Jovenel Moïse. Led by opposition politician Jean-Charles Moïse (no relation), protesters state that their goal is to create a transitional government to provide social programs and to prosecute allegedly corrupt officials.[3][4]

Released in November 2017, a Senate probe of the period 2008-2016 (concerning the René Préval and Michel Martelly administrations as well as the chief of staff of then-sitting President Jovenel Moïse) revealed significant corruption had been funded with Venezuelan loans through the Petrocaribe program.[5]

When Venezuela stopped shipping oil to Haiti in March 2018, this led to fuel shortages. With the removal of government subsidies in July, kerosene prices went up over 50 percent, with similarly steep hikes on other fossil fuels.[6] These rises in taxes on gasoline, diesel, and kerosene that went into effect on 7 July 2018 brought Haitians into the streets. Flights were canceled into and out of Haïti by US airlines.[7][8] The government backed down on the tax increases, and the President accepted the resignation of the inexperienced Jack Guy Lafontant as Prime Minister on 14 July 2018, replaced one month later by Jean-Henry Céant.[9][10]

In mid-August 2018, Gilbert Mirambeau Jr. tweeted a photo of himself blindfolded holding a cardboard sign with "Kot kòb PetwoCaribe a ?" (where did the PetroCaribe money go?) written on it. The hashtag #petrocaribechallenge was soon widely circulated on social media.[11][10]

Anger over the revelations and accusations from the continuing investigation simmered through social media into the autumn and boiled over again, first in October 2018, with tense scenes and violence in Les Cayes, in Jacmel, and in Saint-Marc.[12] Then, a week of protests in November 2018 led to 10 deaths, including several killed when a government car "lost a wheel and plowed into a crowd".[13]

Significant protests broke out again in February 2019 following a report from the court investigating the Petrocaribe Senate probe.[1][14][15] Economic problems and the increased cost of living helped fuel the protests.[15] 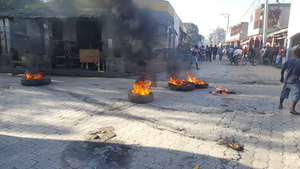 Tires on fire in protests in early 2019.

On 7 February, protesters targeted and damaged wealthy Haitians' luxury vehicles.[15] The following day, the mayors of Petion-ville and Port-au-Prince announced the cancellation of pre-Carnival events.[15] Two days later protestors clashed with police, with demonstrators throwing stones at the home of President Moïse, after one of his allies' security personnel struck a woman's car and began to beat her.[16]

On 12 February, protesters burned down a popular market, looted stores and assisted with a prison break in Aquin that freed all of the facility's prisoners.[14][17] In Port-au-Prince, the building housing the Italian and Peruvian consulates was looted by protesters.[18][19]

President Jovenel Moïse addressed the country on 14 February, saying he would not step down and "give the country up to armed gangs and drug traffickers".[20]

During a funeral procession on 22 February, Haitian police fired tear gas at a crowd of about 200 people carrying the casket of a man killed during protests days earlier.[21] Opposition leader Schiller Louidor called for future protests, though the overall size of protests began to subside that day.[21]

Three days after the lower house voted a censure motion against Prime Minister Jean-Henry Céant's government on 18 March 2019,[22] Jovenel Moïse replaced Céant with Jean-Michel Lapin.[23] As of mid-November 2019, this change had not been ratified by the Haitian Parliament. Lacking a government because of the impasse between the President and the Parliament, Haiti has had hundreds of millions in international aid—for which having a sitting government was a prerequisite—suspended.[24]

During escalating protests on 10 June, journalist Rospide Petion was shot in a company car on his way home from Radio Sans Fin in Port-au-Prince, where he had criticized the government on air before leaving the station.[25][26]

On 4 October, thousands protested across Haiti. In Port-au-Prince, the mayor, joined the protestors in calling for Jovenal Moïse to step down. Two days earlier the opposition sent a letter by delegation to the UN Secretary General denouncing the sitting President's role in the Petrocaribe affair, and the government's role in a massacre in La Saline.[27][28] Lyonel Trouillot wrote in L'Humanité, "Without dipping into conspiracy theory, there is something worrying about the international community's silence about the Haitian situation."[29][30]

On 11 October, a second radio journalist critical of the government, Néhémie Joseph, was found dead in the trunk of his car in Mirebalais.[31][32]

On 22 October, thousands of Catholics demonstrated in the capital. Archbishop Max Leroy Mésidor [ht; fr; pl; de] asked Haitian leaders to heed the people who "cannot go on any longer. We are fed up." Energy crises, road blockages, and widespread unrest have led to massive drops in tourism, causing the closure of hotels in Petion-ville, where the Best Western Premier closed permanently,[33] and in Cap-Haïtien, where Mont Joli was closed.[34] Two people were killed in protests in Port-au-Prince on 27 October. Masked police officers were themselves out on the streets demonstrating that day because of low salaries and lack of health insurance.[35]

Though the Haitian constitution calls for legislative elections in October, none were held in October 2019.[24] The United Nations announced they had counted 42 deaths and 86 injuries since mid-September.[36]

"Peyi lok" ("country lockdown")[33] is how the situation was described in Haitian Creole in November 2019 after two and a half months with schools, courts, businesses, public services, and economic production largely shut down.[37][33]

Though parents and school directors still felt uneasy about it amidst barricades and gunfire, schools across the country began to reopen in December.[38][39]

The US Under Secretary of State for Political Affairs (David Hale) visited Haiti on 6 December, following up on US Ambassador to the UN Kelly Craft's November visit.[40] During the visit, he met with the administration and with leaders from several opposing political parties, some of whom, including Fanmi Lavalas and Fusion-Mache Kontre, refused any collaboration with the sitting president.[41] On 10 December, the US House Foreign Affairs Committee began hearings on the situation in Haiti, which Frederica Wilson had pushed for. At the hearing, Maxine Waters was sharply critical of US support for the sitting president. Neither the State Department nor USAID was present at the hearings.[2]

In September and October 2020, more protests have occurred throughout the country. The protesters criticise the government’s response to the coronavirus pandemic, alleging it did not provide enough to those who lost their jobs because of the virus.[42]

Police have also held protests demanding better pay and working conditions. The police exchanged fire with Haitian soldiers outside the national palace where police were protesting working conditions, in February. In early 2020, a United Nations report said the Haitian police was corrupt and failing to protect the population.[42]

The protests continue into 2021, with violence and repression becoming common, according to the UN.[43]

The opposition has been led by Jean-Charles Moïse.[3] This opposition has declined offers for dialogue, demanded Jovenel Moïse's resignation,[15] and organized a nationwide general strike to force him to resign from office.[17] Alongside opposition lawmakers, he called for a transitional government to replace Jovenel Moïse: "If Jovenel Moïse does not want to step down from power, we are going to name an interim president in the coming days".[3][4]

The Port-au-Prince newspaper Le Nouvelliste reported on 18 February 2019 that a Haitian citizen and seven non-Haitians were arrested in the city. At the time of their arrest, they were carrying rifles, pistols, drones and satellite phones in their vehicle, which had no license plates.[45] The Haitian Foreign Minister Bocchit Edmond confirmed that among them were five Americans.[46] According to the editor of Haïti Liberté, the group included two former Navy SEALS, a former Blackwater employee, and two Serbian mercenaries living in the US. They were tasked with protecting the former head of the National Lottery, who intended to transfer US$80 million from a PetroCaribe bank account—controlled jointly by the President, the Prime Minister, and the President of the Central Bank—to a bank account solely controlled by President Jovenel Moïse.[47]

Violence towards the press[edit source | edit]

According to the Committee to Protect Journalists, some reporters have been targeted by protesters.[44] One Reuters journalist, Robenson Sanon, was wounded during the protests in February 2019, but believes that it was coincidental because he was caught in-between clashes.[44]

Journalist Rospide Petion was killed on his way home from the Radio Sans Fin in Port-au-Prince on 10 June 2019 by an unknown gunman. Some correspondents filming protests on 9–10 June were targeted by both police and the crowds.[25][26] On 11 October, another radio journalist critical of the government, Néhémie Joseph, was found dead in Mirebalais after complaining about receiving death threats.[31][32] Vladjimir Legagneur, a freelance journalist, is presumed to have been killed in March 2018 while reporting on gang activity in Grande Ravine.[48]