Under sponsorship agreements with Doosan, the series was formally known as the National League Division Series presented by Doosan.[2] The Brewers and the Dodgers won their respective series to advance to the Championship Series.

The Brewers entered the NLDS as the top seed, having completed the regular season with a record of 96–67 and winning the NL Central via a tie-breaker game. The second-seeded Dodgers went 92–71 in the NL West, also winning their division via a tie-breaker game. The NL East champion Braves were seeded third via their 90–72 record. The final participant was the winner of the NL Wild Card Game, the Rockies.

This was the 14th NLDS appearance for Atlanta, 13th for Los Angeles, fourth for Colorado and third for Milwaukee (who also played in the 1981 ALDS, before joining the National League in Template:Mlby).

This was the first postseason meeting between the Brewers and Rockies. 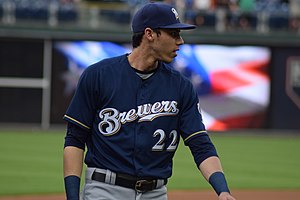 Christian Yelich went 2-for-3 including the only home run in Game 1.

Template:Linescore The Brewers took the lead in the bottom of the third inning, on a two-run home run by Christian Yelich off of Rockies starting pitcher Antonio Senzatela. The Rockies tied it in the top of the ninth, getting two runs off of Brewers closer Jeremy Jeffress via three singles, an error, and a sacrifice fly. Milwaukee won the game in the bottom of the tenth, when Mike Moustakas hit a two-out walk-off single off of Adam Ottavino with runners on first and third. Brewers reliever Joakim Soria, who had retired the Rockies in order in the top of the tenth, got the win. 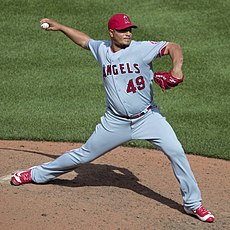 Brewers starter Jhoulys Chacín, shown here with the Angels in 2016, got the win in Game 2.

Template:Linescore After three scoreless innings, Milwaukee took the lead in the bottom of the fourth, on back-to-back doubles by Mike Moustakas and Hernán Pérez. The lead was extended to 4–0 in the eighth, with three runs coming off a total of two walks and three singles. Brewers starter Jhoulys Chacín got the win after allowing three hits in five innings while striking out three and walking three; closer Jeremy Jeffress earned the save, pitching the eighth and ninth while allowing two hits and striking out three. Rockies starter Tyler Anderson allowed one run on four hits in six innings of work, and took the loss. 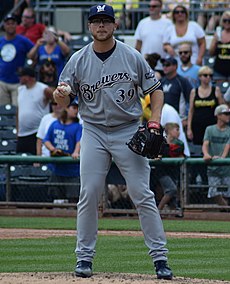 Milwaukee reliever Corbin Burnes got the win in Game 3.

Template:Linescore The Brewers opened the game with a run in the top of the first inning, coming on a walk, single, and fielder's choice, with Christian Yelich scoring for the 1–0 lead. A Jesús Aguilar home run in the top of the fourth inning gave Milwaukee a 2–0 lead. The Brewers doubled their lead to 4–0 in the top of the sixth inning; with runners on second and third with two outs, Rockies reliever Scott Oberg gave up one run via balk and another via a wild pitch. Home runs by Orlando Arcia and Keon Broxton in the top of the ninth inning increased the lead to 6–0. In the bottom of the ninth, the Rockies got two men on base with one out, before Milwaukee reliever Josh Hader came in and recorded the final two outs, completing the sweep. Brewers pitcher Corbin Burnes got the win after pitching two innings of no-hit relief, while Rockies starter Germán Márquez allowed seven hits and two runs in five innings and took the loss. The Brewers' 12​2⁄3 innings from starters were the fewest ever for a team that won a Division Series.[4] The Brewers will play the Dodgers in the NLCS.

Dodgers' starting pitcher Hyun-jin Ryu got the win in Game 1.

Template:Linescore Hyun-jin Ryu started the game for the Dodgers and Mike Foltynewicz for the Braves. Joc Pederson hit Foltynewicz's third pitch of the game for a home run, his 10th leadoff homer of the season, to start the scoring. In the second inning, Max Muncy hit a three-run home run to put the Dodgers up, 4–0. Muncy became just the eighth player to hit a home run and walk three times in a playoff game.[5] Foltynewicz only lasted two innings, allowing four runs on four hits, three walks and one hit batter. He also struck out five. Ryu pitched seven innings, struck eight batters, and did not allow a run or walk. It was his second career postseason start of seven scoreless innings. The only other Dodgers to do it multiple times were Sandy Koufax, Jerry Reuss and Orel Hershiser.[6] Kiké Hernández added a homer in the sixth inning and the Dodgers scored one more run in the eighth on a sacrifice fly to win game one of the series, 6–0.[7]

Template:Linescore Walker Buehler started for the Dodgers, while Sean Newcomb started for the Braves. Atlanta took a 5–0 lead in the bottom of the second inning. The first run came when Newcomb forced a run with a bases-loaded walk, the first time in postseason history a pitcher has done this.[10] Four more runs were scored on a grand slam by Ronald Acuña Jr. Acuña (20 years, 293 days old) became the youngest player to hit a grand slam in post-season history, surpassing Mickey Mantle (who was 21 years, 349 days old in the 1953 World Series).[11] Los Angeles got back two runs in the top of the third, on an RBI single by Justin Turner with the second run scoring on error by Acuña. Newcomb was replaced after allowing two runs (one earned) in ​2 2⁄3 innings. Chris Taylor hit a two-run home run in the fifth off of Kevin Gausman to cut the lead to one run and then Max Muncy tied the game with a homer off Max Fried. After the second inning, Buehler settled down and pitched five innings with only two hits and seven strikeouts. He also walked two and allowed the five runs. The Braves recaptured the lead when Freddie Freeman homered off Alex Wood in the sixth inning. The Dodgers got a couple of baserunners on in the ninth but Arodys Vizcaíno managed to close out the win for the Braves, 6–5, extending their season.[12] The game's attendance of 42,385 was the largest yet at the two-season old SunTrust Park.[13]

Manny Machado had two hits and four RBIs in Game 4.

Template:Linescore Mike Foltynewicz made his second start of the series for the Braves, after his abbreviated start in Game 1, while Rich Hill made his first start of the post-season for the Dodgers. An RBI double by Manny Machado in the first inning gave the Dodgers an early lead. A two RBI pinch hit single by Kurt Suzuki in the fourth inning put the Braves ahead by a run. Foltynewicz was removed after four innings, where he struck out five and only allowed two hits, four walks and one run. Hill pitched 4​1⁄3 innings, with three strikeouts, and allowed four hits while walking five. A pinch-hit two RBI single by David Freese off Brad Brach put the Dodgers back ahead in the sixth inning. A three-run home run by Machado in the seventh inning off of Chad Sobotka extended the lead to 6–2. The Dodgers bullpen held on and they won the game and the series, advancing to their third straight National League Championship Series.[14]