From Wikiafripedia, the free encyclopedia that you can monetize your contributions or browse at zero-rating.
Unchecked
Jump to navigation Jump to search
Trans-Neptunian objectTemplate:SHORTDESC:Trans-Neptunian object
"Farout" redirects here. For other uses, see Far Out (disambiguation).

2018 VG18 is a distant trans-Neptunian object that was discovered well beyond 100 AU (15 billion km) from the Sun.[8] It was first observed on 10 November 2018 by astronomers Scott Sheppard, David Tholen, and Chad Trujillo during a search for distant trans-Neptunian objects whose orbits may be gravitationally influenced by hypothetical Planet Nine. They announced their discovery on 17 December 2018 and nicknamed the object "Farout" to emphasize its distance from the Sun.[3]

As of 2020[update] the object is at an observed distance of 123.5 AU (18 billion km) from the Sun, which is more than three times the observed distance of the dwarf planet Pluto from the Sun. 2018 VG18 was the most distant natural object ever observed in the Solar System, until it was itself supplanted by an object initially estimated at 140 AU (21 billion km) nicknamed "FarFarOut".[9] However, 2018 VG18 is not close to being the object with the most distant orbit on average, as its semi-major axis is estimated to be only about 81 AU; in comparison, the semi-major axis of the planetoid 90377 Sedna is about 480 AU.[10]

2018 VG18 is considered to be a dwarf planet candidate, as its absolute magnitude implies that it is around 500 km (310 mi) in diameter. Assuming that the object is predominantly icy in composition, it is expected to be large enough to attain a gravitationally rounded shape, and thus be a dwarf planet.[6] Observations of 2018 VG18 show that it is pinkish in color, which indicates that it has an ice-rich surface.

2018 VG18 was discovered by astronomers Scott Sheppard, David Tholen, and Chad Trujillo at the Mauna Kea Observatory in Hawaii on 10 November 2018.[1][3] The discovery formed part of their search for distant trans-Neptunian objects (TNOs) with orbits that may be gravitationally perturbed by the hypothesized Planet Nine. The search team had been involved in the discoveries of several other distant TNOs, including the sednoids 2012 VP113 and 2015 TG387.[3][11] 2018 VG18 was first identified as a faint object slowly moving in two images taken with the 8.2-meter Subaru Telescope on the night of 10 November 2018.[1][3] At the time of discovery, 2018 VG18 was located in the constellation Taurus,[lower-alpha 1] at a very faint apparent magnitude of 24.6, approaching the lowest detectable magnitude limit for most telescopes.[1][8]

The very slow movement and low apparent magnitude of 2018 VG18 indicated that it is very distant, which prompted additional follow-up observations to constrain its orbit and distance.[3] The object was reobserved in December 2018 with the 6.5-meter Magellan-Baade telescope at the Las Campanas Observatory in Chile, with observation times spanning ten days.[1] However, due to 2018 VG18's slow motion, its orbit could not be accurately calculated from the short observation arc.[11] Despite this, the discovery of 2018 VG18 along with a preliminary orbit solution was formally announced in a Minor Planet Electronic Circular issued by the Minor Planet Center on 17 December 2018.[1]

Since the announcement of 2018 VG18's discovery, the object has been occasionally observed by Scott Sheppard using the Magellan and Subaru telescopes in January, February, March, and November 2019[12][9] and also by the Gran Telescopio Canarias located at the Roque de los Muchachos Observatory on the island of La Palma in November 2019 and January 2020. These observations helped reduce uncertainties in 2018 VG18's orbit.[12] As of 2020[update], 2018 VG18 has been observed for over three oppositions, with an observation arc of 3 years (1,095 days). Only two precovery images of 2018 VG18 have been identified, and both were taken by the Cerro Tololo Observatory's Dark Energy Camera on 16 January 2017.[2]

Upon the announcement of 2018 VG18's discovery, the discovers nicknamed the object "Farout" for its distant location from the Sun, and particularly because it was the farthest known TNO observed at the time.[3] On the same day, the object was formally given the provisional designation 2018 VG18 by the Minor Planet Center.[1] The provisional designation indicates the object's discovery date, with the first letter representing the first half of November and the succeeding letter and numbers indicating that it is the 457th object discovered during that half-month.[lower-alpha 2] The object has not yet been assigned an official minor planet number by the Minor Planet Center due to its short observation arc and orbital uncertainty.[2] 2018 VG18 is expected to receive a minor planet number once it has been observed for over at least four oppositions, which would take several years.[13][3] Once it receives a minor planet number, the object will be eligible for naming by its discoverers.[13]

2018 VG18 is the second-most distant observed Solar System object and is the first TNO discovered while beyond 100 astronomical units (AU) from the Sun, overtaking the dwarf planet Template:Dp (96 AU) in distance.[9][3] As of 2020[update] 2018 VG18's distance from the Sun is 123.5 AU (18.5 billion km; 11.5 billion mi),[7] more than three times the observed distance of Pluto from the Sun (34 AU during 2018).[3] For comparison, the distances of the Pioneer 10 and Voyager 2 space probes were approximately 126 AU and 124 AU in 2020, respectively.[14] At such distances, 2018 VG18 is thought to be close to the heliopause, the boundary where the Sun's solar wind is stopped by the interstellar medium at around 120 AU.[11] The new orbit determination indicates that this object is currently very close to or at aphelion, and that it is a member of the scattered disc. 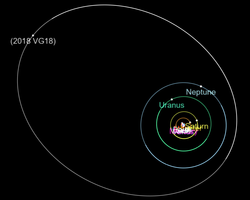 Retrograde motion in the sky through Taurus

On average, 2018 VG18 orbits about 81 AU from the Sun, taking approximately 727 years to complete one full orbit around the Sun. With an orbital eccentricity of about 0.53, it follows a highly elongated orbit, varying in distance from 37.8 AU at perihelion to 123.8 AU at aphelion. Its orbit is inclined to the ecliptic plane by 24.5 degrees, with its aphelion oriented below the ecliptic.[5][2] At perihelion, 2018 VG18 approaches close to Neptune's orbit without crossing it, having a minimum orbit intersection distance of approximately 8 AU.[2] Because 2018 VG18 approaches Neptune at close proximity, its orbit has likely been perturbed and scattered by Neptune, thus it falls into the category of scattered-disc objects.[4][11] 2018 VG18 last passed perihelion in the late 17th century.[5]

Prior to orbital refinements in 2019–2020,[12] 2018 VG18 was thought to have a smaller orbit and perihelion distance, based on a preliminary orbit calculated from a short span of observations.[1] The preliminary orbit solution implied that 2018 VG18 crosses Neptune's orbit, which would have fit under the description of the centaur classification.[11] Regardless, the Minor Planet Center generally classifies 2018 VG18 as a distant object since it orbits the Sun in the outer Solar System.[2]

2018 VG18 was discovered in a particular region of the sky where other extreme TNOs have been found, suggesting that its orbit may be similar to those of extreme TNOs, which characteristically have distant and highly elongated orbits that may have resulted from the gravitational influence of the hypothetical Planet Nine.[3] 2018 VG18's nominal orbit appears to be anti-aligned with Sedna; the longitude of pericenter of 2018 VG18's orbit is oriented about 198 degrees from Sedna's orbit.[lower-alpha 3]

The albedo (reflectivity) of 2018 VG18 has not been measured nor constrained, thus its diameter could not be calculated with certainty. Assuming that the albedo of 2018 VG18 is within the range of 0.10–0.25, its diameter should be around 500–850 km (310–530 mi).[19] This size range is considered to be large enough such that the body can collapse into a spheroidal shape, and thus be a dwarf planet.[6][20] Astronomer Michael Brown considers 2018 VG18 to be highly likely a dwarf planet, based on his size estimate of 656 km (408 mi) calculated from an albedo of 0.12 and an absolute magnitude of 3.9.[6] Unless the composition of 2018 VG18 is predominantly rocky, Brown considers it very likely that 2018 VG18 has attained a spheroidal shape through self-gravity.[6] Astronomer Gonzalo Tancredi estimates that the minimum diameters for a body to undergo hydrostatic equilibrium are around 450 km (280 mi) and 800 km (500 mi), for predominantly icy and rocky compositions, respectively.[20] If the composition of 2018 VG18 is similar to the former case, the object would be considered a dwarf planet under Tancredi's criterion.

Observations of 2018 VG18 with the Magellan-Baade telescope show that the object is pinkish in color.[3] The pinkish color of 2018 VG18 is generally attributed to the presence of ice on its surface, since other ice-rich TNOs display a similar color.[3][11] Apart from its color, the spectrum and surface composition of 2018 VG18 have not yet been measured in detail and will require further observations.[11]