In 2015, the Met Office and Met Éireann announced a pilot project to name storm warnings as part of the "Name our Storms" project for wind storms and asked the public for suggestions. The meteorological offices produced a full list of names for 2015–16 through to 2017–18, common to both the United Kingdom and Ireland, with the Netherlands taking part from 2019 onwards. Names in the United Kingdom will be based on the National Severe Weather Warning Service, when a storm is assessed to have the potential for an Amber ('be prepared') or Red ('take action (danger to life)') warning.

There are two main naming lists: one created by the national meteorological agencies of the United Kingdom, Ireland and the Netherlands, and another created by the equivalent agencies from France, Spain, Portugal and Belgium. Additionally, former Atlantic hurricanes will retain their names as assigned by the National Hurricane Center of the United States.[1]

Also, some of these storms may be of tropical origins. For example, ex-Hurricane Lorenzo of 2019 made landfall in Ireland and United Kingdom. All details on tropical storms and hurricanes can be found on the National Hurricane Centre.

This will be the fourth year in which the meteorological agencies of France, Spain and Portugal will be naming storms which affect their areas. This naming scheme partially overlaps that used by the United Kingdom, Ireland and the Netherlands, as storms named by the other group of agencies will be used reciprocally.[3]

Template:Infobox windstorm small Storm Alex, named by AEMET and Météo-France on 30 September, formed near Brittany on 1 October after undergoing explosive cyclogenesis. Because of this storm, one department in France, the Morbihan, was upgraded to the red alert for strong winds at 4:00 pm Central Time.[4]

Alex caused much damage in the department of the Morbihan. Trees were blown down and roads and railways were closed due to flooding and the trees which were downed by the strong winds. Around 100,000 power outages were reported in Brittany. Météo-France observed local strong winds over land (88 mph (142 km/h) in Granville, 82 mph (132 km/h) in Sarzeau, 81 mph (131 km/h) in Vannes, 80 mph (129 km/h) in Cholet).

The storm led to advection of Mediterranean air northwards where it interacted with the coastal topography producing a heavy rainfall in southeast France, known as a "Mediterranean Episode".[5] The department of the Alpes-Maritimes was issued with a red alert for high amounts of rain and flooding.[6] Météo-France reported a maximum of 571 millimetres (22.5 in) in 24 hours in Mons. More generally, 250 to 300 millimetres (9.8 to 11.8 in) were reported in the department of the Alpes-Maritimes. Météo-France also reported 60 to 100 millimetres (2.4 to 3.9 in) in departments of the Drôme, Ardèche, Rhône, Ain, Saône-et-Loire, Jura and Côte-d'Or. 104 millimetres (4.1 in) in 24 hours in La Rochepot, Côte-d'Or, set a new a record for Burgundy in October.[7] At least 6 people were reported dead; 1 in Brest and 5 in the Alpes-Maritimes with 7 missing in total and for a dozen others families and authorities don't have any news.[8][9] In Italy, 2 deaths were reported with 1 person missing. Strong gusts caused one death in each of Austria, Poland and Czech Republic.[10][11][12] 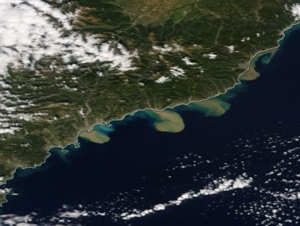 Many yellow and amber weather warnings were issued in the United Kingdom for strong winds and heavy rain. As of 21:00 BST, the Met Office reported the maximum rainfall total to be 78 millimetres (3.1 in) at Liss, Hampshire, with the maximum gust of 71 mph (114 km/h) being recorded at Berry Head, Devon.[13] Many of the fatalities were caused by the ensuing landslides.[14][15][16]

On 5 October 2020, the death toll of the floods affecting France and Italy rose to 7 as three bodies were found in Nice, bringing the death toll in France to four, meanwhile there were three dead people in Italy.[17] The region of Piedmont witnessed levels of rain not recorded since 1958, in which it reached a record 630 millimetres (25 in) of rain in Sambughetto in just 24 hours.[17][18] By 6 October, the death toll reached 12 with a further 20 still missing, as there were another five dead people in Italy,[19][18] including a worker who was found in the Italian region of Liguria, having gone missing during the beginning of the floods.[20] Moreover, cemeteries in Saint-Martin-Vésubie and Tende were partially washed out by the floods, in addition to seven Canadian black wolves which were lost from a wildlife park in Nice.[19] Monaco's Minister of State Pierre Dartout announced that €4m would be distributed to the affected regions including French communities in Alpes-Maritimes and Italian municipality of Ventimiglia.[21] Another 3 people were found dead, and another person went missing, bringing the number of missing people to 21, and the death toll to 15 individuals as of 7 October.[22] By 3 October, one more individual had gone missing, but the other 21 missing people were found safe and rescued, bringing the number of missing persons to 1 individual. In addition, an Italian firefighter was killed by a falling branch.[23]

Barbara developed from a wave on a front trailing from a complex of low pressure southwest of Portugal on 19 October. It moved northwest over the Iberian peninsula into the Bay of Biscay, moving into the English channel and over the North Sea, then into Scandinavia, bringing heavy rain and, in some places, their first snow of the season.[24]

Storm Clement was named by AEMET on 27 November. It was located near the Azores Islands when it was named. By 28 November, Clement had moved slightly farther south and was affecting the Canary and Madeira Islands.[34] The storm stalled, keeping the worst conditions away from mainland Europe. Portugal and some parts of Western Spain did see Clement's outer bands.[35] The NHC was also monitoring the system for tropical or subtropical development. After stalling for about 4 days, the system dissipated on 2 December.[36][37]

Template:Infobox windstorm small Storm Dora was named on 2 December. It brought rain and snow to the UK, France, the Iberian Peninsula, and parts of Scandinavia. Areas closest to the coast saw some winds of more than 62 mph (100 km/h).[38][39] By late 4 December, the system had become very disorganized, and early on 5 December was absorbed by another low-pressure system, which was named Xunav by the Free University of Berlin.

Template:Infobox windstorm small Storm Ernest was named on 7 December by AEMET and Meteo France. It moved over the Bay of Biscay and then onto land bringing rain and wind to Northern Spain and the South of France. Its impacts then moved toward Italy and Switzerland, bringing rain and as well as snow in the mountains, but weaker winds.[40] After reaching the shores of Italy, the system turned toward the northeast. Its rain then affected the Balkan countries and brought snow and/or mixed precipitation to parts of Belarus, Russia, and the Baltics, with its centre over Romania and Bulgaria.[41] The system dissipated by 12 December.

Storm Bella was named on Christmas Day by the Met Office. It hit the UK and the Netherlands, bringing wind gusts of up to 70 mph (110 km/h) or more. [42] There is also the threat of flooding, which has forced many people to evacuate their homes.[43] The system was notably large, since the low pressure covered most of the area between Greenland's east coast and Norway's west coast and the area between Svalbard and the British-Irish Isles on 25 December. The Norwegian coast was affected, causing much of the region to have a White Christmas. After making landfall, the weakening system turned north, and eventually dissipated in Central Scandinavia.

Storm Filomena was named by AEMET on 5 January.[44] It started as one system that split into two systems[45] and hit Spain and Portugal back to back from 6 to 9 January. Near the coasts, wind gusts of up to 50 mph (80 km/h) occured, as well as 1–2 in (2.5–5.1 cm) of rain. Further inland and in higher elevations, snowfalls of up to 2 ft (0.61 m) occured, with areas of the city of Madrid receiving snow accumulation of up to 19 in (48 cm). According to AEMET, Filomena was the largest snowstorm in Spain since 1971. In the mountains, wind gusts of up to 75 mph (121 km/h) accompanied the large snow totals.[46][47] Due to the unprecedented amount of snowfall, some unsuspecting motorists were trapped on the roads for hours. 4 deaths have also been reported; two in Malaga due to flooding, and two homeless men who froze to death. One was in Madrid, the other in Calatayud. As of 9 January, the system is still active and affecting Spain, with another 8 in (20 cm) of snow still possible in Madrid.[48]

A powerful cyclone, named Aila by the Finnish Meteorological Institute, struck Finland, on 16 September and continued to cause disruption through the following day. The worst impacts were felt in south-central Finland, just north of Helsinki. In these areas, the storm brought heavy rain and wind. There were waves up to 19 feet (5.8 meters) in height and winds up to 77 mph (124 km/h). The most rain fell in Kajaani, where they got as much rain as they get in all of September from Aila. In terms of physical impacts, the storm disrupted ferry traffic, brought down trees, and cut power to at least 90,000 homes. [49][50]

Cyclone Ianos, a medicane named by the national meteorological service of Greece moved through Greece between 17 and 18 September. It resulted in the death of at least 3 people and train services connecting the north and south of Greece being cut off. The storm came with significant flooding and winds near or above hurricane-force. [51]

On 19 November, the extratropical remnants of Hurricane Eta hit Finland and were named Liisa by the Finnish Meteorological Institute. It brought wind of up to 55 mph (89 km/h), cutting power to more than 64,000 people. Trees and buildings we’re damaged too. Heavy rain also induced travel difficulties, with slippery roads causing poor driving conditions, as well as damage to rail tracks forcing train services to be delayed or cancelled throughout the country. [52]