On 24 September 2019, UEFA announced that a revised format would be used for the 2020–21 edition, the second season of the competition.[4] The 55 UEFA national teams were divided into four leagues, with Leagues A, B and C featuring 16 teams each, divided into four groups of four teams. League D featured 7 teams divided into two groups, with one containing four teams and the other containing three. The teams were allocated to leagues based on the 2018–19 UEFA Nations League overall ranking. Each team now played six matches within their group, except for one group in League D that played four, using the home-and-away round-robin format on double matchdays in September, October and November 2020. This format ensured that for almost all groups, teams in the same group played their last matches at the same time. It also increased the number of total league phase matches from 138 to 162, and minimised the number of friendly matches.[5][6]

Teams also compete for promotion and relegation to a higher or lower league. In Leagues B, C and D, the group winners were promoted, while the last-placed teams of each group in Leagues A and B were relegated. As League C had four groups while League D had only two, the two League C teams that are to be relegated will be determined by play-outs in March 2022. Based on the Nations League overall ranking of the fourth-placed teams, the first-ranked team will face the fourth-ranked team, and the second-ranked team will face the third-ranked team. Two ties will be played over two legs, with each team playing one leg at home (the higher-ranked team will host the second leg). The team that scores more goals on aggregate over the two legs will remain in League C, while the loser will be relegated to League D. If the aggregate score is level, the away goals rule is applied, with extra time played if away goals are also equal. The away goals rule is again applied after extra time, with a penalty shoot-out used to decide the winner if no goals are scored during extra time.[2]

If two or more teams in the same group were equal on points on completion of the league phase, the following tie-breaking criteria were applied:[2]

Individual league rankings were established according to the following criteria:[2]

In order to rank teams in League D, which was composed of different sized groups, the results against the fourth-placed team in Group D1 were not taken into account for the purposes of comparing teams placed first, second and third in their respective groups.[2]

The ranking of the top four teams in League A will be determined by their finish in the Nations League Finals (first to fourth).[2]

The overall UEFA Nations League rankings were established as follows:[2]

The Nations League will be partially linked with European qualification for the 2022 FIFA World Cup in Qatar, with the format confirmed by the UEFA Executive Committee during their meeting in Nyon, Switzerland on 4 December 2019.[8][9] The qualifying structure will depend on results from the Nations League, although to a lesser degree than the UEFA Euro 2020 qualifying play-offs. The ten group winners after the first round (group stage) will qualify directly for the World Cup. Then, the second round (play-offs) will be contested by the ten group runners-up, along with the best two Nations League group winners, based on the Nations League overall ranking, that finished outside the top two of their qualifying group.[10] The play-offs will be split into three play-off paths, played in two single-match knockout rounds (semi-finals and finals, with the home teams to be drawn), from which an additional three teams will also qualify.[2]

Due to the COVID-19 pandemic in Europe, the UEFA Executive Committee approved on 28 August 2020 the following principles for the league phase of the 2020–21 UEFA Nations League:[11]

All matches played in September 2020 were required by UEFA to be held behind closed doors due to the COVID-19 pandemic in Europe.[13][14] On 1 October 2020, UEFA announced the partial return of spectators to matches beginning in October 2020, restricted to a maximum of 30 percent of the respective stadium capacity. However, the return of spectators was subject to the decision of local authorities, with regional limits taking precedence over UEFA's maximum allowed capacity. Away supporters were not allowed at the venues. Social distancing was mandatory for spectators, and additional precautionary measures (such as face masks) were implemented in accordance with local regulations.[15]

The Nations League Finals, originally scheduled for 2–6 June 2021, were moved to October 2021 following the rescheduling of UEFA Euro 2020 to June and July 2021 due to the COVID-19 pandemic.[17][18][12] The scheduling of the league phase was reviewed by the UEFA Executive Committee during their meeting on 17 June 2020.[19] At the meeting, UEFA decided to adjust the match schedule for October and November 2020 in order for an additional match to be played in each window.[20] This allowed for the UEFA Euro 2020 qualifying play-offs, along with the postponed March 2020 international friendlies, to be played on 7–8 October and 11–12 November 2020. Therefore, matchdays 3–6, which originally would spread over three days each during 8–13 October and 12–17 November 2020, would now spread over only two days.[21] The changes to the International Match Calendar for October and November 2020, which extended each window by one day, were approved by the FIFA Council on 25 June 2020.[22]

The original fixture list was confirmed by UEFA on 3 March 2020 following the draw.[23] However, due to the change of the league phase calendar, a revised schedule for the October and November 2020 fixtures was released by UEFA on 26 June 2020.[24][25] 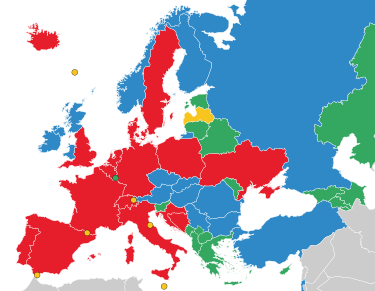 Map showing the leagues each national team is participating in.
League A
League B
League C
League D

All 55 UEFA national teams entered the competition. Due to the format change of the competition, no teams were actually relegated from the 2018–19 season. In addition to the group winners, the second-placed teams in Leagues C and D, along with the best-ranked third-placed team of League D, were also promoted.[16]

In the 2020–21 access list, UEFA ranked teams based on the 2018–19 Nations League overall ranking, with a slight modification: teams that were originally relegated in the previous season were ranked immediately below teams promoted prior to the format change.[26] The seeding pots for the league phase were based on the access list ranking.[2] The seeding pots, draw procedure and fixture list procedures were confirmed by the UEFA Executive Committee during their meeting in Nyon, Switzerland on 4 December 2019.[8][27]

The draw for the league phase took place at the Beurs van Berlage Conference Centre in Amsterdam, Netherlands on 3 March 2020, 18:00 CET.[28][29][30][31] While the draw typically had restrictions for prohibited clashes, winter venues and excessive travel, no conditions applied to the draw given the allocation of the teams to both leagues and pots.[27]

Script error: No such module "Goalscorers".

The results of each team are used to calculate the overall ranking of the competition.[32]