The 2020–21 United States election protests are an ongoing series of protests across multiple cities in the United States following the 2020 United States presidential election between incumbent President Donald Trump and Democratic challenger Joe Biden. The election was held on November 3, 2020. Biden won the election, receiving 81.3 million votes (51.3%) to Trump's 74.2 million (46.9%)[21][22] and winning the Electoral College by 306 to 232.[23][22][21] Biden's victory became clear on November 7, after the ballots (including mail-in ballots) had been tabulated.[24] The Electoral College voted on December 14, in accordance with the law, formalizing Biden's victory.[23]

Before and after the election, Trump and his Trump campaign and allies baselessly challenged the legitimacy of the election and falsely claimed widespread electoral fraud.[25] Trump and his allies filed dozens of legal challenges to the results, which were rejected by at least 86 judges from across the political spectrum, in both the state and federal courts, including by federal judges appointed by Trump himself. The courts found that Trump's claims had no factual or legal basis.[26][27] Trump's unsubstantiated allegations of widespread voting fraud were also refuted by state election officials.[28]

Pro-Trump groups, with the backing of Trump himself, engaged in multiple street protests and demonstrations decrying the election results and echoing Trump's false claim of election fraud.[5] These protests have taken place in Washington, D.C., state capitals, and other locations nationwide; they have included pro-Trump Proud Boys protesters. In November and December 2020, there were nighttime clashes and street scuffles in Washington between Trump supporters who refused to accept the president's defeat, including Proud Boys, and counterprotesters.[5][29][30]

On January 6—the day when Congress formally counts the electoral votes—Trump supporters gathered for the "Save America" rally where attendees heard speeches from Trump and Rudy Giuliani. Before the speeches were over, a mob of protesters marched on Congress and stormed the building.[31] Congress was in session at the time, certifying the Electoral College vote count. Several buildings in the U.S. Capitol complex were evacuated, and protesters broke past security to enter the U.S. Capitol building, including National Statuary Hall.[32][33] All buildings in the Capitol complex were subsequently locked down.[34] There was reportedly an armed standoff at the doors to the House chambers,[35][36] one person was shot within the Capitol building, and one Capitol Police officer died after being beaten with a fire extinguisher.[37][38] At least two improvised explosive devices were found.[39][40]

In the aftermath of the storming of the U.S. Capitol, at least 36 House Democrats called for Trump's immediate impeachment and removal by Congress.[41][42] State-level officials including Maryland Lieutenant Governor Boyd Rutherford supported impeachment,[43] and representatives called on Vice President Mike Pence to remove Trump via the Twenty-fifth Amendment to the United States Constitution.[44][45] Trump continued to face backlash in the days following and, due to his use of social media to encourage his supporters' protests and violence, was eventually restricted or banned from most online platforms including YouTube, Facebook, Instagram, and his preferred Twitter.[46][47]

Armed supporters of Donald Trump have continued protesting in the aftermath of the storming of the US Capitol.[48] As of January 10, armed protests were being planned at the state capitols of most states.[49]

In remarks from the White House on the early hours of November 4, President Trump attacked the vote counting efforts without evidence, calling it "fraud".[50] The president remarked, "We will win this. As far as I'm concerned, we already have won."[51] Major networks provided fact checks and variously interrupted the speech or carried it in full.[52] Furthermore, former White House Chief Strategist Steve Bannon suggested violence against Dr. Anthony Fauci and FBI Director Christopher A. Wray could serve as "a warning to federal bureaucrats" to begin a second term for President Trump.[53]

Observers had been suggesting for months about the possibility of a premature Trump victory claim and then a contested election. This was expected based on the likelihood that the initial votes counted by Election Night would skew heavily Republican and mail-in ballots would skew heavily Democratic, a blue shift that became more favorable to Biden as more votes are counted and could be misrepresented as fraudulent.[54]

Pro-Trump events have taken place around the country beginning on November 4. 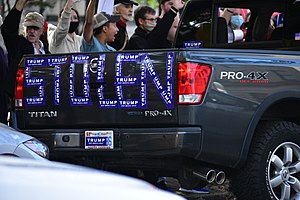 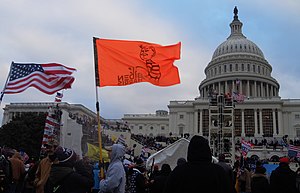 On January 6, the protesters planned to march to the United States Capitol.[99] President Donald Trump supported the planned protest via tweets.[100][101] Mayor Bowser asked residents not participating in the protests to "avoid confrontations with anybody who's looking for a fight".[102][103]

A crowd of several thousand first listened to a speech by Trump, in which he repeated his claims that the election had been stolen and said, "We will never give up. We will never concede. ... Our country has had enough. We're not going to take it anymore." He urged them to march on the Capitol and "show strength".[104] Many listeners then marched on the Capitol, where they breached the barricades, broke windows, and stormed inside the Capitol building. They marched through Statuary Hall.[105] Rioters invaded the offices of Speaker of the House Nancy Pelosi, flipping tables and ripping photos from walls; there was looting in the Capitol.[106][107]

The Capitol was locked down, the Senate and House recessed from their discussions about the electoral count, and Vice President Pence was "whisked away" from the chamber.[108][109] Members of Congress were told to put on gas masks after law enforcement began using tear gas within the building. ABC News reported shooting in the Capitol building and an armed standoff at the front door of the House chambers.[110][111] New York Times also said police drew their guns inside the House of Representatives chamber.[112]

Multiple officers were injured in the mob violence at the Capitol.[113][114] One died of his injuries, and another committed suicide over the following weekend. A woman was shot inside the Capitol and later died; no information has been released about the shooter.[115] At least one improvised explosive device was found on Capitol grounds, and another just blocks away at the headquarters of the Republican Party.[39][40]

In the aftermath of the storming of the US capitol, over 250[42][116] members of Congress called for Trump's immediate impeachment and removal by Congress, or by invoking the Twenty-fifth Amendment to the United States Constitution.[117][118][41] State-level officials who have described Trump's conduct as impeachable include Maryland Lieutenant Governor Boyd Rutherford.[43][44][45]

Congresswoman Cori Bush introduced a resolution to have Republican members of the House who supported contesting battleground states' electors in the joint session of Congress be investigated and expelled from office. "The Republican members of Congress who have incited this Domestic terror attack through their attempts to overturn the election must face consequences." the progressive lawmaker tweeted. "They have broken their sacred Oath of office."[119] 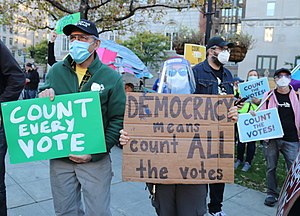