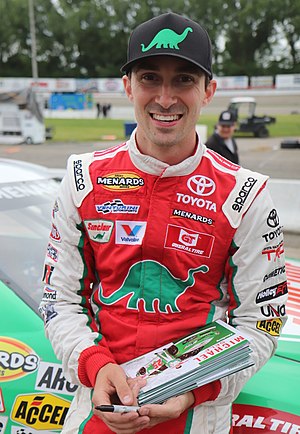 Michael Self, the current points leader.

When the season was put on hold due to the coronavirus pandemic, drivers from all NASCAR series, including some ARCA Menards Series drivers, participated in the eNASCAR iRacing Pro Invitational Series during that time.

Beginning this season, NASCAR allowed ARCA teams in the East, West, and the big 20-race ARCA Menards Series to run the same car number in a race together like in lower levels of racing. This is the first time this has occurred when Chuck Hiers and Robert Pawlowski both used the No. 11 at the East Series opener at New Smyrna, with Pawlowski as the No. 11E. In this series, the first time this happened was in the race at Phoenix, with Hailie Deegan and Chase Cabre sharing the No. 4, with Cabre as the No. 4E and Tom Berte and Lawless Alan sharing the No. 12, with Alan as the No. 12W. The reason for which teams had the letter "E" or "W" next to their number was because those teams come from the ARCA East and West Series. Previously, under the old format of the NASCAR K&N East and West Series, when teams from both of those series held combination races each year at Iowa Speedway, one team was forced to switch their car number after qualifying if they were slower than the other. For example, the No. 6 Rev Racing team in the East Series and the No. 6 Sunrise Ford Racing team in the West Series would race together, and one of those teams would usually use the No. 66 or No. 69 in the race.

The complete schedule was released on October 10, 2019.[36] That came after a soft reveal of some Showdown tracks on October 2.[37] Five Flags Speedway, Fairgrounds Speedway, and Toledo Speedway were taken and moved from the ARCA schedule to the East Series schedule. Additionally, Salem Speedway and Pocono Raceway, which each had two ARCA races in 2019, were both reduced to have only one race in 2020. In their places, Phoenix Raceway, Bristol Motor Speedway and Memphis International Raceway were added to the schedule, and the series returned to road courses for the first time since Road America in 2017 with the addition of Watkins Glen International and Mid-Ohio Sports Car Course to the schedule. Watkins Glen, Bristol, and Memphis were all previously part of the East Series schedule.

The Sioux Chief Showdown is a ten-race series within the schedule, consisting mostly of short tracks, that will have a separate points tally and champion.

It was announced that all ARCA (and NASCAR) races would be postponed through May 3, which affects the races at Salem and Talladega, which will need to be run at another time in the season.[39] The start times and TV channels for those two rescheduled races are subject to change. They were originally scheduled to start at 2 and 6 pm EST, respectfully, and be aired on MAVTV and Fox Sports 1, respectfully.