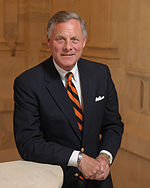 The 2020 Congressional insider trading scandal is a political scandal in the United States involving members of the United States Senate due to multiple Senators allegedly violating the STOCK Act by selling their stocks before the stock market crash on February 20, 2020, using knowledge given to them at a closed Senate meeting. The Department of Justice initiated a probe into the stock transactions on March 30, 2020.

On January 26, 2012, Senator Joe Lieberman introduced the STOCK Act that would prohibit the use of non-public information for private profit, including insider trading by members of Congress and other government employees. The bill was passed by the Senate with only Senators Richard Burr, Jeff Bingaman, and Tom Coburn voting against it. The House of Representatives voted to approve of the bill and it was signed into law by President Barack Obama on April 4, 2012.[1]

On January 24, 2020, the Senate Committees on Health and Foreign Relations held a closed meeting with only Senators present to brief them about the COVID-19 outbreak and how it would affect the United States.[2][3] Following the meeting Senator Kelly Loeffler and her husband Jeffrey Sprecher, the chairman of the New York Stock Exchange, made twenty-seven transactions to sell stocks worth between $1,275,000 and $3,100,000 and two transactions to buy stock in Citrix Systems which saw an increase following the stock market crash.[2] Senator David Perdue made a series of 112 transactions with stocks sold for around $825,000 and buying stocks worth $1.8 million. Perdue started buying around $185,000 in stock in DuPont, a company that makes personal protective equipment, on the same day as the Senate briefing up to March 2.[4][5]

On February 7, Senator Burr, the Chair of the Senate Intelligence Committee, stated in an open-editorial on how the government could respond to coronavirus that "Luckily, we have a framework in place that has put us in a better position than any other country to respond to a public health threat, like the coronavirus," However, on February 13, he and his wife sold between $628,000 and $1.7 million worth of stocks through thirty-three transactions and on February 27, Burr stated that "There's one thing that I can tell you about this: It is much more aggressive in its transmission than anything that we have seen in recent history," at a Capitol Hill Club luncheon and his statement was later leaked in a secret recording.[6][7]

On March 19, ProPublica published an article showing that Burr had sold his stocks shortly before the stock market crash and Loeffler, Inhofe, and Feinstein's stock selling was also reported. NPR asked Caitlin Carroll, Burr's spokesperson, for a comment on the alleged violations and she responded with "lol" and then clarified that "As the situation continues to evolve daily, he has been deeply concerned by the steep and sudden toll this pandemic is taking on our economy."[6]

Tucker Carlson called for Burr to resign from the Senate and be prosecuted for insider trading on a segment of Tucker Carlson Tonight.[8] Representative Alexandria Ocasio-Cortez called for Burr to resign and Representative Joaquin Castro called for an investigation into the stock selling.[9] Representative Doug Collins, who is running against Loeffler in Georgia Senate special election, criticized her by stating "People are losing their jobs, their businesses, their retirements, and even their lives and Kelly Loeffler is profiting off their pain? I'm sickened just thinking about it."[10]

On April 10, Montana Attorney General Tim Fox accused Representative Greg Gianforte, the wealthiest member of the House of Representatives, of insider trading by investing into the manufacturer of hydroxychloroquine. Fox is currently running against Gianforte for the Republican nomination in the 2020 Montana gubernatorial election.[11]

On March 20, Burr requested for the Senate Ethics Committee to investigate his stock trading history and stated that he only used publicly available information to make his decisions.[12] On March 30, the Department of Justice initiated a probe into the stock transactions with the Securities and Exchange Commission.[13]

During the investigation it was discovered that Burr had also sold around $47,000 worth of stock in OCI, a Dutch fertilizer company, before it suffered a forty-two percent decrease in its value in 2018. From September 5 to 8, 2018, Burr and his wife sold all of their stock in OCI, which at the time was experiencing its highest stock value, and then a month later it failed to meet quarterly earnings expectations due to the Trump administration allowing exemptions to eight countries for sanctions placed on Iranian oil and petrochemicals.[14]

On May 13, the FBI seized Burr's phone, to investigate his communications with his stock broker, among other warrants, including one to search his personal iCloud account.[15] On May 14, Burr told Senate Majority Leader Mitch McConnell that he would temporarily step down as chairman of the Senate Intelligence Committee for the remainder of the investigation.[16]