Record breaking heavy rains hit the prefectures of Kumamoto and Kagoshima in the southern Japanese island of Kyushu on the 4 July 2020. As a result of flooding and landslides 34 people are confirmed or presumed dead. Fourteen of the victims were residents of an old age home in Kuma, Kumamoto that was flooded.

Typhoons, storms, and heavy flooding have hit Japan hard in the years prior to 2020. The mountainous terrain of Japan place it at risk for flooding and landslides. These climate events have killed hundreds of people, and expert analysis has stated global warming is a contributing cause.[1]

The Kuma River basin had previously flooded in 1965. One of three major rapids in Japan, the Kuma is a 115 km long class A river. Its course begins in the mountain range in Kyushu, and runs through Hitoyoshi, Kumamoto, Kuma, Kumamoto, and Yatsushiro, Kumamoto before it discharges into the Yatsushiro Sea.[2]

On 4 July 2020, heavy rain caused flooding in the southern Japanese island of Kyushu. At 5 AM local time the Japan Meteorological Agency raised its heavy rain warning to its highest level of 3 in many parts of the prefectures, the first time it has even done so for these areas.[3] The Japan Meteorological Agency stated the amount of rain was record breaking for the region and was never seen before.[4] The rate of rainfall exceeded 100 millimetres (3.9 in) per hour.[5]

As of 5 July 2020, 34 people are confirmed (18) or presumed (16) dead.[5] Fourteen of the dead were residents in a flooded old age home in Kuma, Kumamoto.[3][4] Kumamoto governor Ikuo Kabashima stated that scores were stranded after mud and floodwater gushed into the old age home.[1] According to a rescue volunteer, when they reached the old age home the water was still at the first floor level. The rescue personnel managed to rescue residents who had made it up to the second floor but were unable to reach those left below.[5]

Following overnight rains, authorities instructed over 75,000 residents to evacuate in the prefectures of Kumamoto and Kagoshima.[6] 203,200 residents were instructed to shelter in place, and 109 shelters were opened in the region.[3] 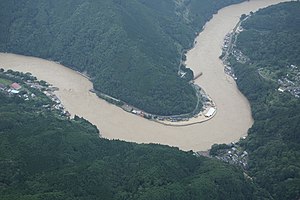 A dike was breached near the town of Hitoyoshi, Kumamoto, and it was flooded by the Kuma River.[3][6] In Kuma, Kumamoto, stranded residents were rescued by helicopter.[6] Eight homes were swept away in Ashikita, Kumamoto.[4] In Tsunagi, Kumamoto, 2–3 people were pulled out of a landslide without signs of life.[6] Some 8,000 homes were left without power in Kumamoto and Kagoshima.[6]

Prime Minister Shinzo Abe ordered the creation of a special task force, dispatched 10,000 Japan Self-Defense Forces troops to the area, and vowed to rescue the missing.[6][1] On 5 July 2020, it was reported that 40,000 self-defense troops, coast guard, and firemen were deployed in the rescue operation.[5]