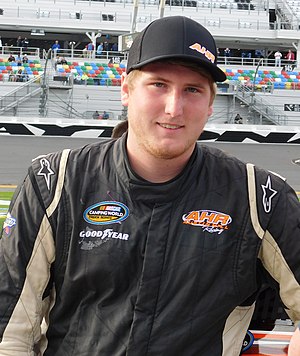 The 2020 NASCAR Gander RV & Outdoors Truck Series is the 26th season of the third highest stock car racing series sanctioned by NASCAR in North America. The season began at Daytona International Speedway with the NextEra Energy 250 on February 14. The regular season will end with the Corrigan Oil 200 at Michigan International Speedway on August 8. The NASCAR playoffs will end with the Lucas Oil 150 at Phoenix Raceway on November 6.

2020 marks the twelfth season for Camping World Holdings as the series' sponsor, with it being the second season under the Gander RV & Outdoors brand. In September 2019, Camping World announced a rebranding of Gander Outdoors stores as part of a shift in strategy, resulting in the stores also carrying recreational vehicle sales and service, henceforth the slight name change to reflect corporate changes.[1]

The early season was headlined by incentives for any driver to beat Kyle Busch in four of the races he participated in. After Busch won the race at Las Vegas, the first of his five Truck starts in 2020, which was his seventh series start in a row where he won, Kevin Harvick and Gander RV & Outdoors CEO Marcus Lemonis each offered $50,000 for any full-time Cup Series regular if they were to finish higher than Busch in his remaining four starts of the year. The challenge spurred Cup drivers Chase Elliott and Erik Jones to run Truck races in an attempt to win the $100,000 bounty.[2][3] Later, Halmar Friesen Racing owner Chris Larsen announced he would offer a different $50,000 bounty to any Truck Series regular who were to finish ahead of Busch in the upcoming races he would be competing in.[4]

When the season was put on hold due to the coronavirus pandemic, drivers from all NASCAR series, including many Truck Series drivers, participated in the eNASCAR iRacing Pro Invitational Series during that time.

As with the Cup and Xfinity Series, NASCAR made numerous changes to the Truck Series schedule for the 2020 season. Of note is the return of the series to Richmond Raceway for the first time since 2005, which comes at the expense of the spring Martinsville date. Martinsville in exchange was given an Xfinity Series race for the first time after a hiatus for 24 of the last 25 years (the exception being a single event in 2006), which will be run in the fall on the same weekend as the Cup and Truck Series races there. Also, this will be the first season that the season finale will be at Phoenix Raceway while Homestead–Miami Speedway moves to March after Atlanta to become the fourth race of the season. Bristol is now the elimination race for the Round of 10 while the second Las Vegas race is the opener for the Round of 8 and Martinsville, now with only one date on the schedule, will end the Round of 8.[89][90][91][92][93][94]

Changes due to the coronavirus (COVID-19) pandemic[edit source | edit]