Template:Infobox oil spill The Norilsk diesel oil spill is an industrial disaster that began on 29 May 2020 when a fuel storage tank at Norilsk-Taimyr Energy's Thermal Power Plant No. 3 (owned by Nornickel) collapsed, flooding local rivers with 21,000 cubic metres (17,500 tonnes) of diesel oil.[1][2] Russian President Vladimir Putin declared a state of emergency.[3] The accident has been described as the second-largest oil spill in modern Russian history.[4]

Diesel oil is used as a backup fuel for the Norilsk-Taimyr Energy (NTEK) coal-fired combined heat and power plant.[5] A diesel fuel storage tank failed when the permafrost it was built on began to soften.[6] A statement from Nornickel stated: "Due to sudden subsidence of supports which served for more than 30 years without problems, the diesel fuel storage tank was damaged, resulting in a fuel leak."[7]

The spill affected an immediate area of 180,000 square metres (44 acres), then the nearby Ambarnaya and Daldykan rivers, contaminating an area of 350 square kilometres (135 square miles). Clean-up efforts were anticipated to be difficult as there are no roads and the rivers are too shallow for boats and barges. It was estimated the immediate cost of emergency relief activities would be 10 billion roubles (US$146 million), with a total clean-up cost of 100 billion roubles (US$1.5 billion), which would take five to 10 years.[8][9]

In a 3 June 2020 televised meeting devoted to disaster management, President Putin asked Sergei Lipin, the head of NTEK: "Why did government agencies only find out about this two days after the fact? Are we going to learn about emergency situations from social media?"[10][11] 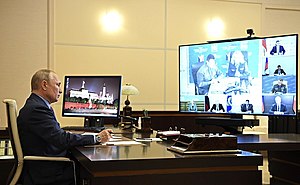 Russia's Investigative Committee has launched a criminal investigation of the spill. The power plant's director has been arrested but not yet formally charged.[13] Yevgeny Zinichev, head of Russia's Emergency Situations Ministry, stated that the power plant did not report the incident for two days, while trying to contain the situation on their own.[13]

President Vladimir Putin declared a regional state of emergency following the spill, and criticized the local authorities for a slow response.[13] He also criticized Vladimir Potanin, the owner of Norilsk Nickel, for not properly maintaining the safety of the fuel tanks at the plant.[14] Putin ordered officials to amend Russian law to prevent similar accidents in the future.[15]

As a result of the spill, at least 21,000 tons of diesel oil spilled into the Ambarnaya River. Greenpeace has compared the size of the Norilsk spill to the 1989 Exxon Valdez oil spill[1] and called the Norilsk spill "the largest in the Russian Arctic's history".[13]

On Thursday, 4 June, Russian state television reported that the spill had been contained using a series of specially constructed booms on the Ambarnaya river.[16]

In the aftermath of the Norilsk spill, Russia's Prosecutor General’s office ordered safety checks at all dangerous installations built on the permafrost in Russia's Arctic.[17]