The 2020 Republican National Convention is an event in which delegates of the United States Republican Party will select the party's nominees for president and vice president in the 2020 United States presidential election. The convention will be held from August 24 to 27, 2020.[1] The convention was originally scheduled to be held at the Spectrum Center in Charlotte, North Carolina, but was moved to Jacksonville, Florida due to disagreements with the North Carolina state government over its social distancing measures related to the COVID-19 pandemic. However, on July 23, the Jacksonville events were cancelled by the Republican National Committee.

By tradition, because Republicans currently hold the White House, their convention will be held after the 2020 Democratic National Convention, which is scheduled for August 17–20.[2] Former White House Director of Management and Administration Marcia Lee Kelly was named convention president and CEO in April 2019,[3] making her the first Asian-American to do so for either major political party in American history.[4]

On March 17, 2020, President Donald Trump won the Florida and Illinois primaries, giving him more than the required 1,276 delegates to secure the presidential nomination.[5] He had previously announced that Vice President Mike Pence would remain as his vice presidential running mate in his re-election bid.[6]

Las Vegas, Nevada, and Charlotte, North Carolina, were mentioned as possible locations for the 2020 RNC due to their locations within "swing states." Neither had ever hosted a Republican National Convention, although Charlotte had hosted the 2012 Democratic National Convention. A Charlotte television station, WBTV, reported that Charlotte, Las Vegas, and "another unnamed city in Texas, which sources at the meeting said were likely either Dallas or San Antonio" were finalists to host the convention.[7] Other sources named Dallas, Texas[8] and New York City, New York[9] as prospective hosts, while Las Vegas, Nevada,[10][11] Nashville, Tennessee,[12] Philadelphia, Pennsylvania,[11] and San Antonio, Texas[8][11] had been under consideration earlier. However, Charlotte was the only city in the country to officially submit a bid for the convention.[13] On July 18, 2018, the RNC Site Selection Committee voted unanimously to recommend holding the convention in Charlotte.[14] The Republican National Committee made the selection official on July 20.[15]

Republicans opposed to Trump's presidency announced their intent to host a competing "Convention on founding principles" to occur at the same time as the RNC in Charlotte.[18] 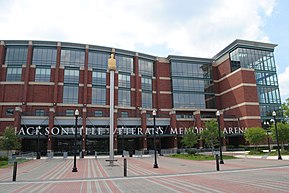 The Vystar Veterans Memorial Arena in Jacksonville, Florida was to be the main site of the 2020 Republican National Convention.

On May 25, 2020, President Trump raised the possibility of moving the convention out of Charlotte after North Carolina Governor Roy Cooper stated that the convention would need to be scaled down due to the COVID-19 pandemic. After weeks of failed negotiations, on June 2, 2020, Governor Cooper rejected the plans submitted by the Republican Party to host a full-scale convention. President Trump announced via tweet stating “Because of [Cooper], we are now forced to seek another State to host the 2020 Republican National Convention”.

RNC officials stressed that the mechanics of the convention would still be held in Charlotte.[19] "The RNC’s Executive Committee has voted unanimously to allow the official business of the national convention to continue in Charlotte. Many other cities are eager to host the president’s acceptance of the nomination, and we are currently in talks with several of them to host that celebration," said RNC Communications Director Michael Ahrens.

On July 16, the Jacksonville Republican National Convention Host Committee sent out a letter announcing that, in addition to the VyStar Veterans Memorial Arena, other venues in Jacksonville would be used, including TIAA Bank Field, Daily's Place, 121 Financial Park, and "several other" venues".[26]

However, with the explosion of COVID cases peaking at above 15,000 cases per day in mid-July,[27] the possibility of the Jacksonville convention being canceled as well began to be discussed.[28] Several of the local health restrictions in Charlotte that had prompted the RNC to seek a different location—requirements for people to wear masks and practice social distancing—were later adopted by Jacksonville.[29] Sen. Chuck Grassley, who is 86, said he would skip the RNC for the first time in 40 years due to the risk of COVID-19.[30]

On July 23, President Trump announced that RNC events scheduled in Jacksonville, Florida had been cancelled, saying, “The timing for the event is not right.”[31][32][33]

The first day of the Convention, as mentioned above, will take place in Charlotte, NC, as the party is contractually obligated to conduct some of its convention business there.[34] Only 300 delegates are to attend.

Committee on Rules and Order of Business[edit source | edit]

The National committee voted just to republish[35] the 2016 platform,[36] including several unflattering references to the "current president" who four years earlier was Barack Obama. The decision was excoriated across the Republican party,[37] including by President Trump.[38]

Adoption of the platform by convention[edit source | edit]

The base number of pledged delegates that are allocated to each of the 50 states is 10 at-large delegates, plus 3 district delegates for each congressional district. A fixed number of pledged delegates are allocated to Washington D.C. and each of the five U.S. territories. Bonus delegates are awarded to each state and territory based on whether it has elected (if applicable) through December 31, 2019 (after the 2019 "off-year" elections): a Republican governor, Republican majorities in either one or both chambers in its state legislature, one or two Republicans to the U.S. Senate, or a Republican majority in its delegation to the U.S. House of Representatives. A state is also awarded additional bonus delegates if it carried the Republican candidate, Trump, in the 2016 presidential election.[39]

The table below reflects the presumed delegate count as per the 2020 Republican primaries.

As of November 2019[update], the following estimated numbers of 2,440 available pledged delegates and 2,550 total delegates may change, as penalty/bonus delegates are awarded to each state and territory based on Republican gains and losses at both the Federal and state level through the 2019 "off-year" elections to the end of December 31, 2019.[40]

Several states have canceled their regular delegate selection methods in order to give them to the incumbent president.[41]

According to party rules agreed to in July 2016, "a candidate has to win a majority of the vote in eight states to have his or her name placed into nomination at the convention."[42] and votes for candidates who have either suspended their campaigns or withdrawn will not be counted.