The 2020 Singaporean general election is scheduled for Friday, 10 July 2020.[3] It will elect Members of Parliament to the 14th Parliament of Singapore since Singapore's independence in 1965, using the first-past-the-post electoral system. Voting is mandatory for all Singaporeans aged 21 or above as of 1 March 2020.[4]

This election will be the 18th general election in Singapore and the 13th since independence. The ruling People's Action Party will attempt to secure their 15th consecutive term in government since 1959.

According to Article 65(4) of the Constitution, the maximum term of any given Parliament is five years from the date of its first sitting following a general election, after which it is dissolved by operation of law. However, the Prime Minister may advise the President to dissolve Parliament at any time during the five-year period.[5][6][7][8] A general election must be held within three months after every dissolution of Parliament. Elections are conducted by the Elections Department (ELD), which is under the Prime Minister's Office.[9]

There are 93 elected seats in Parliament organised into 14 Single Member Constituencies (SMCs) and 17 Group Representation Constituencies (GRCs). Each SMC returns one Member of Parliament using the first past the post voting system, while each GRC returns 4 or 5 MPs by block voting, at least one of whom must be from the Malay, Indian or other minority communities. A group of persons wishing to stand for election in a GRC must all be members of the same political party, or a group of independent candidates. The voting age in Singapore is 21 years.

On 23 June 2020 at 4pm, Prime Minister Lee Hsien Loong announced during a live televised announcement that President Halimah Yacob had dissolved the 13th Parliament of Singapore on the same day and had issued a writ of election with nominations to be held a week later on 30 June 2020.[10][11][12][13][14]

The Returning Officer is Tan Meng Dui, a former Deputy Secretary at the Ministry of National Development and current CEO of the National Environment Agency. This is his first election as Returning Officer, taking over from Ng Wai Choong who had served in this role in the previous general election.[15][16][17]

The governing People's Action Party (PAP) has been in power since 1959 and is currently led by the Prime Minister Lee Hsien Loong. The leading Opposition party is The Worker's Party, led by Pritam Singh, with 6 elected seats and 3 NCMP seats. A total of eleven Opposition parties has announced that they will challenged the ruling party in this election.

The Elections Department introduced several new features for this election to help ease the election process for voters, candidates and election volunteers. Voters will be able to mark their candidate(s) choices more clearly using self-inking pens and enjoy shorter queuing time with the introduction of the e-registration system. Candidates are able to fill in most of the necessary documents online while election volunteers are able to count the number of votes within a shorter duration with the help of counting machines, enabling election results to be released at least 50 minutes earlier.[21][22] In addition, there will be more polling stations, reducing the average number of voters per polling station from 3,000 to about 2,400. Senior citizens above the age of 65 will be given priority to vote between 8am and 12pm on Polling Day.[23]

On 27 January 2016, a bill is passed for the Constitution, increasing the total number of members by three to 12 members. This is the first increase for the number of members allocated since the 2011 Singaporean general election, where it was increased from three members to nine.[24] As in the case for previous elections, NCMPs are offered for best-performing non-elected candidates (outside ruling party), with the number determined by the total number of opposition candidates elected; if there are at least 12 oppositions-elect, then NCMPs will not be offered, as it was seen in the 1991 election. The names of the eligible candidates are announced a few days after the polling day. Candidates may decline the post if offered, as were seen previously in the 1984[25] and 2015 elections.[26][27]

The Electoral Boundaries Review Committee is made up of senior civil servants and charged with adjusting the boundaries of electoral divisions prior to an election. The government officially claims this as necessary to ensure minority participation in Parliament amidst demographic changes while ensuring an equitable amount of voters represented per MP, though critics have raised allegations of gerrymandering to disadvantage the opposition.[28][29][30][31] As of 2015, there were 16 GRCs and 13 SMCs. Prime Minister Lee convened the committee on 1 August 2019 with instructions to reduce the size of GRCs and increase the amount of SMCs.[32][33] The exact date of formation was revealed only when Opposition Leader Pritam Singh asked Trade and Industry Minister Chan Chun Sing in a written reply in Parliament.[34]

The Committee released its report on 13 March 2020 with the formation of 17 GRCs and 14 SMCs.[35][36] For the first time since 1991, six-member GRCs were eliminated and reduced to five. A new Sengkang GRC was formed from portions of the former Punggol East and Sengkang West SMCs and the boundaries of Tampines GRC were altered for the first time since 2001, due to the increase in population in the northeastern area of Singapore. Four new SMCs were also carved out (Kebun Baru, Yio Chu Kang, Marymount and Punggol West), three former SMCs were absorbed into neighboring GRCs (Fengshan, Punggol East and Sengkang West), while two SMCs (Hong Kah North and Potong Pasir) had their boundaries modified. The remaining SMCs and four GRCs (Aljunied, Holland-Bukit Timah, Jurong and Tanjong Pagar) were left untouched, though the Workers' Party raised questions on the abolition of SMCs that it had previously contested and lost by a narrow margin. The changes saw about 13% of voters being allocated to a new constituency while increasing the amount of seats from 89 to 93.[36]

The changes made in the electoral divisions are as follows:

During a Straits Times forum on 11 March, Deputy Prime Minister Heng Swee Keat said that the timing of the elections could be affected in view of the worsening pandemic.[37] On 25 March, Senior Minister Teo Chee Hean told Parliament that he believed it would be unconstitutional for the President to form a caretaker government unless a state of emergency had been recommended by the Cabinet to the President.[38]

On 28 March, Tan Cheng Bock responded to Teo's comments by saying that the unconstitutional nature of a caretaker government as a result of a postponing a general election would be far more preferred than having a health emergency by exposing millions of Singaporeans to potential COVID-19 infection.[39]

On 7 April, Minister for Trade and Industry Chan Chun Sing introduced the Parliamentary Elections (COVID-19 Special Arrangements) Bill to Parliament which would allow voters under Stay-Home Notices or Quarantine Orders related to COVID-19 to vote outside of their normal electoral divisions in the upcoming General Election.[40] The Bill was passed by Parliament on 4 May and assented to by the President on 15 May.[41] The Parliamentary Elections (COVID-19 Special Arrangements) Act 2020 came into operation on 26 May.[42]

The restrictions on gatherings of more than five people meant that opposition parties seemed unlikely to gather for their usual discussions to avoid a possible multi-party fights in certain constituencies.[43]

On 18 June, the ELD introduced temporary measures to reduce the risk of transmission of COVID-19, such as no rallies and TV screenings pertaining to the election are to be held, instead replacing with e-rallies and a new "Constituency Political Broadcast",[44] and nomination centres will no longer admit members of the public or supporters during nomination day. Walkabouts and campaigning vehicles are still allowed, though safe distancing and minimal physical contact still applies, and candidates are also not allowed to make speeches or physical rallies, including during the campaigning from campaigning vehicles, meaning that there will be no parades held by the candidates after the election.[45]

During polling day, voters are given a recommended two-hour time slot (from 8am to 8pm) on their ballot card as a measure to counter long queues during polling; measures for safe distancing still applies, however, due to a constitution where voting is mandatory, it is currently unknown whether voters with fever or respiratory symptoms are exempt from voting.[46][47]

In the lead up to the 2017 Singapore presidential election, Speaker of Parliament and MP for Marsiling-Yew Tee GRC Halimah Yacob resigned from the party on 7 August 2017 to fulfill regulations prohibiting the President of Singapore from any party affiliations.[49] As she had vacated her seat in Parliament, there were calls for a by-election, though the Court of Appeal eventually ruled that there was "no duty to call a by-election when a single vacancy arises in a GRC".[50]

On 23 November 2018, Heng Swee Keat and Chan Chun Sing were respectively elected as the party's first and second assistant Secretary-General to the PAP's 35th Central Executive Committee.[51] The two assistant posts were seen as an indicator of Lee Hsien Loong's successor, given that the upcoming election is likely to be Lee's last.[52] Following the announcement of Heng Swee Keat's appointment as the sole Deputy Prime Minister on 1 May 2019, succeeding Teo Chee Hean and Tharman Shanmugaratnam, former MP Inderjit Singh said that the PAP intends to showcase Heng's imminent ascent to the top post and dispell rumours of any surprises in the leadership sucession.[53][54]

On 3 November 2017, then-Secretary-General and Aljunied GRC incumbent MP Low Thia Khiang announced during a speech on the party's 60th anniversary that he would not contest the next party elections.[55] During the party's 2016 Central Executive Committee election, Chen Show Mao had mounted a surprise challenge for the leadership post but lost the election to Low in a 41–65 vote. In the leadership election on 8 April 2018, Pritam Singh was elected unopposed as successor to Low as the party's new Secretary-General.[56]

Observers say that the lack of a contest was a good sign of internal unity, and that the party is keen to demonstrate its multiracial credentials now that it has a non-Chinese secretary-general, for the first time since 2001 with J. B. Jeyaretnam.[57]

On 30 April, Low was hospitalized due to a head injury, and was discharged on 21 May.[58][59] On 25 June, Low was confirmed not to be standing for this election for the first time after 32 years, as Low is currently in rehabilitation.[60][61] 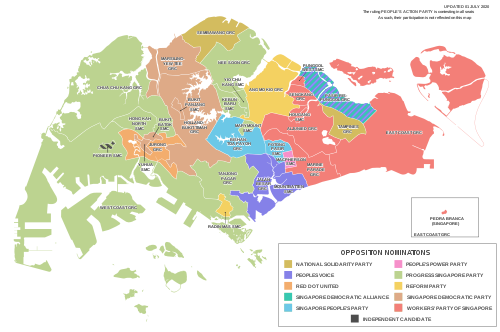 List of notable events that occurred prior to Nomination Day on 30 June 2020. All times are reflected in Singapore Standard Time (SGT).

On 30 June 2020 from 11am to 12pm, each candidate is required to file their nomination papers (along with the approval of a proposer, a seconder and at least four assentors), a political donation certificate (by before 26 June), and pay an election deposit of S$13,500 (down from SG$14,500 in the previous 2015 election, but also the same amount as seen in the 2016 by-election) in any of the nine designated schools or through online to complete their application. Additionally, in the case for Group Representation Constituencies, their team must consist of at least one minority candidate and must also submit a community committee form (Malay or Indian/other minority which is dependent on the constituency's requirements).[3]

The list of nine schools designated as nomination centers are:[12]

As in the case of previous elections, candidates will lose their deposit if they are unable to garner at least one-eighth (12.5%) of the valid votes cast within the contested constituency.

The list of events that occurred from nomination day until the eve of Polling day on 10 July 2020. All times are reflected in Singapore time (SGT). Similar to the previous elections since 2011, candidates can begin campaigning for votes starting from the end of Nominations until two days before Polling day; the eve of polling day and after the last day for the campaigning period is cooling-off day, during this time campaigning is prohibited except for party political broadcasts.

A list of outgoing MPs who will be stepping down from their constituencies are reflected in the table.