South Korea's 21st legislative elections were held on 15 April 2020. All 300 members of the National Assembly were elected, 253 from first-past-the-post constituencies and 47 from proportional party lists. They were the first elections held under a new electoral system.[1] The two largest parties, the liberal Democratic Party and the conservative United Future Party, set up new satellite parties (also known as bloc parties) to take advantage of the revised electoral system. The reforms also lowered the voting age from 19 to 18.

The Democratic Party and its satellite, the Platform Party, won a landslide victory, taking 180 of the 300 seats (60%) between them.[2] The Democratic Party alone won 163 seats — the highest number by any party since 1960. This guarantees the ruling liberal alliance an absolute majority in the legislative chamber, and the three-fifths super-majority required to fast-track its procedures. The conservative alliance between the United Future Party and its satellite Future Korea Party won only 103 seats, the worst conservative result since 1960.

300 members of the National Assembly were elected in the 2016 elections, of whom 253 (84%) were elected from single-member constituencies on a first-past-the-post basis, and 47 (16%) from closed party lists through proportional representation (PR) by the Hare quota largest remainder method.[3] To win seats through proportional representation, parties needed to pass an election threshold of either 5 single-member districts or 3% of the total list vote.[4]

An election reform bill was introduced in February 2019, which would change the allocation of PR seats to a hybrid of the mixed-member proportional (MMP) and mixed member majoritarian systems (also known as the Additional Member System and Parallel Vote, respectively).[5]

The legislative process utilised the 85th Article of the National Assembly law, called the 'Fasttrack' system, which does not require agreement between all parties. This was opposed by the main opposition Liberty Korea Party and Bareunmirae Party member Yoo Seong-min.[6] The decision by Sohn Hak-kyu, leader of the Bareunmirae, to approve the Fasttrack, and his dismissal of his fellow standing committee member Oh Shin-hwan, stirred legal controversy.[7][8] The Prosecution Service declared that Sohn's actions did not merit criminal charges.[9]

The bill was passed on 27 December 2019, despite physical obstruction in the Assembly voting area by the Liberty Korea Party.[5] 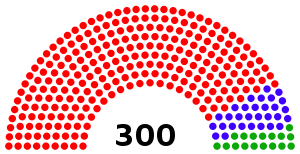 The National Assembly continues to have 300 seats, with 253 constituency seats and 47 proportional representation seats, as in previous elections. However, 30 of the PR seats were assigned on the new compensatory basis, while 17 PR seats continue to use the old parallel voting method.[5][15] The voting age was also lowered from 19 to 18 years old, expanding the electorate by over half a million voters.[16][17]

Candidates for the National Assembly were required to pay a fee of 15,000,000 South Korean won (US$14,000 as of December 2017), and under the National Security Act the Constitutional Court may block the registration of "left-wing", "pro–North Korean" parties, though this provision has not affected recent elections.[19]

The 2020 election for the National Assembly was held on 15 April, in accordance with Article 34 of the Public Official Election Act, which specifies that Election Day for legislative elections is on "the first Wednesday from the 50th day before the expiration of the National Assembly members term of office".[20] Eligible voters were required to be registered and at least 18 years old on the day of the election,[19] and to show an approved form of identification at the polling place. Polls on Election Day were open from 6 a.m. to 6 p.m. Korea Standard Time.[21]

Since 2009, voters have been entitled to vote from overseas.[19] However, due to Covid-19 quarantine measures, voting from over 50 foreign countries was restricted or cancelled.[22] Voters could also cast early votes at any polling stations in Korea without prior notice.[23]

Both major parties split to take advantage of the new electoral system, with the main party only running in the constituencies, and the satellite party only running for the proportional seats.[24] They are listed together in the table below, which is sorted by the number of seats prior to the election.

In the run-up to the election, the Liberty Korea Party absorbed the New Conservative Party and several smaller parties, forming the United Future Party.[25]

Parties not represented in the 2016 National Assembly but that planned[needs update] to run candidates include:

The election was held during the COVID-19 pandemic, which had both practical impacts on the conduct of the poll, and political impacts on voters' choice of parties to support.[26] In February 2020, South Korea had the second-most cases of any country, after China. By election day, South Korea had recorded over 10,000 cases and 200 deaths.[27] The country had introduced one of the world's most comprehensive programmes of COVID-19 testing, contact tracing and quarantine of suspected cases.[28] As a result, the case fatality rate in South Korea was 1.95%, lower than the global average of 4.34%,[29] and the country avoided widespread lockdowns that were implemented elsewhere. Electoral officials declined to postpone the election; South Korea has never postponed any election, even the 1952 election which was held during the Korean War.[17]

Special arrangements were required to ensure social distancing during the election and prevent further infection. Voters were required to wear face masks and stay at least 1 metre (3 ft) apart when queueing or casting their votes.[26][27] Before entering the polling station, each voter was checked for fever using a thermometer, required to use hand sanitiser, and issued with disposable plastic gloves. Any voter with a body temperature greater than 37.5 °C (99.5 °F) was taken to a segregated polling booth, which was disinfected after each use.[26][17] The thousands of voters who had been placed in self isolation due to potential infections were allowed to vote, but only after the polling stations had been closed to all other voters, and provided they were asymptomatic.[27][26] About 26% of votes were cast in advance, either by post or in special quarantine polling stations which operated on 10 & 11 April.[17]

Before the outbreak of the pandemic, the Democratic Party had been expected to struggle in the election: opinion polls in 2019 had predicted it would win 37-41% of the constituency votes. The government's response to the outbreak was praised by the World Health Organisation and received widespread support in South Korea. The President of South Korea, Moon Jae-in of the Democratic Party, was not up for re-election, but his response to the pandemic was popular and benefited his party in the legislative election.[26]

After the election people were concerned over new normal of COVID restrictions that government called "everyday quarantine".[30]

The Democratic Party won 163 constituency seats, while their satellite Platform party won 17 proportional representation seats, giving the alliance a total of 180 seats in the 300-seat assembly, enough to reach the three-fifths super-majority required to fast-track assembly procedures. This was the largest majority for any party since democracy was restored in 1987.[26] The United Future Party and their satellite Future Korea Party won 84 constituency and 19 proportional seats respectively; their total of 103 seats (34.3%) was the worst conservative result since the 1960 legislative elections.

A constituency of Gangnam District in Seoul was won by former North Korean diplomat Thae Yong-ho, standing for the United Future Party, the first time in history a North Korean defector had won a constituency seat in the assembly.[31][32][33] United Future Party Hwang Kyo-ahn, who served as prime minister from 2015 to 2017 and acting president during Park Geun-hye's suspension from 2016 to 2017, was defeated by the Democratic Party candidate Lee Nak-yeon, who served as prime minister from 2017 to 2020.[2]

Following the elections, the newly formed proportional parties Platform Party and Future Korea Party started the process of being absorbed into The Democratic Party of Korea and the United Future Party respectively. There were calls to revise the new electoral law prior to integration, which the reverse effect from its intent of increasing small party representation as more seats were won by the big parties.[34]