Template:Infobox tennis event The 2021 Australian Open is a Grand Slam tennis tournament that is currently taking place at Melbourne Park, from 8–21 February 2021.[1]

It is the 109th edition of the Australian Open, the 53rd in the Open Era, and the first Grand Slam of the year. It was originally scheduled for 18–31 January 2021, but was postponed by three weeks to February due to the COVID-19 pandemic. The event is part of the 2021 ATP Tour and the 2021 WTA Tour.

The tournament consists of events for professional players in singles, doubles and mixed doubles. Wheelchair players will compete in singles and doubles tournaments. As in previous years, the tournament's main sponsor is Kia.

Novak Djokovic and Sofia Kenin are the defending champions in Men's Singles and Women's Singles, respectively. 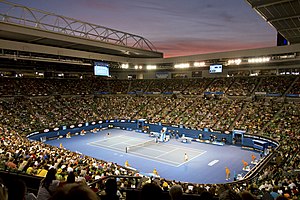 The 2021 Australian Open is the 109th edition of the tournament, held at Melbourne Park in Melbourne, Victoria, Australia.

The tournament is run by the International Tennis Federation (ITF) and is part of the 2021 ATP Tour and the 2021 WTA Tour calendars under the Grand Slam category. The tournament consists of both men's and women's singles and doubles draws as well as the mixed doubles events. There are singles and doubles events for both boys and girls (players under 18), which are part of the Grade A category of tournaments. There are also singles, doubles and quad events for men's and women's wheelchair tennis players as part of the NEC tour under the Grand Slam category.

On 17 December 2020, Tennis Australia announced this edition of Australian Open would be pushed by three weeks from the original 18 January 2021 start to 8 February, impacting players from Europe and the Americas with being picked up to a selected number of charter flights each to Melbourne. The Victoria State Government would allow a mandatory 14-day quarantine on players with COVID-19 safety precautions in place before the warm-up events start on 31 January and alternate tournaments being held in place the week before the tournament.[2]

For the first time in Grand Slam history, Qualifying matches were held outside the country due to Australia's quarantine restrictions. The men's and women's matches were held in Doha, Qatar and Dubai, United Arab Emirates, respectively, from 10–13 January.[3][4] The 8 February start will give qualifiers and eight potential lucky losers have their time to travel to Australia and allow to quarantine upon arrival.[5]

On 30 January 2021, Victorian sports minister Martin Pakula announced that the number of spectators will be limited to 30,000 per day during most of the tournament, which is around 50 percent of normal spectator capacity. The last five days of the tournament will have up to 25,000 spectators per day.[6]

On 4 February 2021, all of the scheduled day's events leading up to the tournament, including the ATP Cup and warm-ups, had to be suspended after a 26-year-old man working at the hotel players were quarantining at tested positive for the virus. Victorian premier Daniel Andrews stated that the 8 February start would not be affected due to the schedule change. The day's events would have been as scheduled moved to 5 February, and as well with the draw ceremony of men's and women's singles draws.[7]

The following are the seeded players. Seedings are based on ATP and WTA rankings on 1 February 2021, while ranking and points before are as of 8 February 2021. Points after are as of 22 February 2021. Due to the impact of the COVID-19 pandemic, an ATP player can count the best Australian Open result from 2020 and 2021 for his ranking.[8]

The following players would have been seeded, but they withdrew from the event.

The following players would have been seeded, but they withdrew from the event.

Below is a series of tables for each of the competitions showing the ranking points offered for each event.

1Qualifiers prize money was also the Round of 128 prize money.
*per team