The 2021 Wooroloo bushfire is a fast moving bushfire that started on 1 February in Wooroloo, 45km north-east of the Perth central business district, in the Shire of Mundaring, Western Australia. By 2 February, the bushfire emergency had spread to Shires of Chittering, Northam, and the City of Swan.[1] It has destroyed at least 71 houses and 2 fire trucks.[2]

The fire started near Werribee Road, Wooroloo on 1 February 2021, with the fire first reported at 12:02 pm.[5] Weather conditions were harsh with the daytime temperature at 38 °C (100 °F) with strong winds.[5] By 1pm, an emergency warning had been issued to residents of Wooroloo, Bailup and Gidgegannup, who were urged to evacuate.[5] A evacuation centre was opened at Brown Park Complex in Swan View.[5] 500 firefighters and 95 vehicles were sent to fight the fire, as had aircraft water bombers.[5]

The fire was moving rapidly through the day in a north-westerly direction and jumped across Toodyay Road (10 km (6.2 mi) from the fire source), and the Walyunga National Park (28 km (17 mi) from the fire source) came under threat.[6] Fire officials said firefighters were battling spot fire that were appearing around 500 metres (1,600 ft) in front of the fire.[6] 120 local horses were relocated from the fire area to the State Equestrian Centre in the afternoon but had to be relocated to Middle Swan when the Equestrian Centre came under threat of the fire.[6]

By midnight, 1,600 ha (4,000 acres) of land had been burnt.[5] At least three homes were confirmed as destroyed.[6] Fire services recorded that one firefighter had received minor burns, one suffered smoke inhalation, and two fire trucks were destroyed by fire.[5] 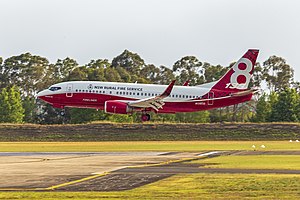 The Department of Fire and Emergency Services (DFES) was advising that 80 per cent of properties in Tilden Park, Gidgegannup had been lost.[7] Earlier in the day, 30 properties were reported lost, but by 4pm that had risen to 59 homes with no loss of life.[8] A DFES spokesperson said of the 59 homes lost, fifteen to twenty houses were lost on the eastern side of Toodyay Road.[9] Western Power had reported 2,700 properties without electricity due to the destruction of the power lines to those areas.[7] A large aerial tanker, a 737 aircraft that can carry 15,000 litres (3,300 imp gal; 4,000 US gal) of water or fire retardant, was on route from the NSW Rural Fire Service and was due in Western Australia by 5pm.[7][8] A smoke alert was issued by DFES that stretched from Joondalup in the northern suburbs to Fremantle in the south with ash falling in many non-fire suburbs including suburbs close to the central business district.[8] A total of six firefighters were reported injured with minor injuries.[8] By the end of the afternoon, the winds were northerly and the firefighters were attempting to build firebreaks on the northern and southern flanks of the fire areas as the wind was expected to change to south-easterly over the next few days.[8] The fire was continuing in a west-south-westerly direction.[8] As of 4pm, the fire had burnt through 7,300 ha (18,000 acres) with a 80 km (50 mi) perimeter.[9] 308 horses, evacuated from various areas in the fire zone the day before, were stabled at the Magic Millions complex.[10]

The morning briefing saw the fire commissioner Darren Klemm comment that the fire had not moved much overnight, but they were struggling with fire on the north-west front as the hilly terrain hindered the fire crews and equipment.[11] Weather conditions continued to be hot and windy.[12] Winds were south to southeasterly at 15 to 25 km/h (9.3 to 15.5 mph) in late morning, changed to south to southwesterly at 35 to 40 km/h (22 to 25 mph) in the afternoon before changing later to 25 to 40 km/h (16 to 25 mph) with gusts expected to be 70 km/h (43 mph) in the hills during the evening.[11] Day time temperature dropped to 34 °C (93 °F).[13] Water bombers returned in the morning and were used to set up lines of retardant in the morning.[12][11] It was confirmed that forty-three homes were lost in the estate of Tilden Park, while seventy-one were recorded as lost in total with over 9,000 ha (22,000 acres) of land burnt.[12]

In the morning, residents of the Shady Hill estate, and the outskirts of east Bullsbrook, were urged to have their bushfire plans in place.[13] But by midday, residents of those areas were asked to evacuate in an northerly direction when the wind changed.[13] In the area north-west of Gidgegannup and east of Walyunga National Park, anyone remaining could no longer leave and were told to defend in place.[13] The RAAF Base Pearce, north-west of the fire, though not under direct threat, became a watch and act zone.[13]

The WA Police arson squad announced they had established the origin of the fire near Werribee Road, Wooroloo and did not believe it was suspicious but were investigating further with DFES investigators.[14] There were two reports of thefts of evacuated homes, one in Aveley and the other in Red Hill which the police commissioner regarded as burglary, not looting.[11] The DFES Deputy Commissioner said that they were investigating whether it was feasible to bring fire crews in from interstate as some local fire crews had been working for three days.[13]

WA Department of Communities opened two more evacuation centres, one at Swan Active in Midvale and another at Swan Active in Beechboro.[12] 700 people had registered at the departments evacuation points, with 230 sleeping overnight.[13] WA Department of Primary Industry and Regional Development provided twelve vets to take care of any injured animals brought in to the fire control centre.[13] Federal Minister for Emergency Management David Littleproud announced disaster relief payments for people who lost their homes, with Centrelink to provide $1,000 per adult and $400 per child from Thursday 4 February.[13]

Identification of some of the aircraft identified is available in the online application named Bushfire.io [15]