The 32nd G8 summit was held on 15–17 July 2006 in Saint Petersburg, Russia. The venue was the Constantine Palace, which is located in Strelna on the Gulf of Finland.[1][2] This was the first time Russia served as host nation for a G8 summit; and the nation's status as a full member of the G8 was confirmed.[3]

The Group of Seven (G7) was an unofficial forum which brought together the heads of the richest industrialized countries: France, Germany, Italy, Japan, the United Kingdom, the United States and Canada starting in 1976. The G8, meeting for the first time in 1997, was formed with the addition of Russia.[4] In addition, the President of the European Commission has been formally included in summits since 1981.[5] The summits were not meant to be linked formally with wider international institutions; and in fact, a mild rebellion against the stiff formality of other international meetings was a part of the genesis of cooperation between France's President Giscard d'Estaing and West Germany's Chancellor Helmut Schmidt as they conceived the initial summit of the Group of Six (G6) in 1975.[6]

The G8 summits during the 21st century have inspired widespread debates, protests and demonstrations; and the two- or three-day event becomes more than the sum of its parts, elevating the participants, the issues and the venue as focal points for activist pressure.[7] 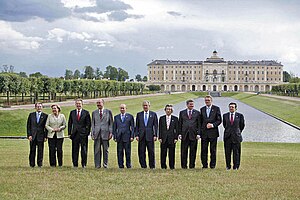 The G8 is an unofficial annual forum for the leaders of Canada, the European Commission, France, Germany, Italy, Japan, Russia, the United Kingdom and the United States.[5]

These summit participants are the current "core members" of the international forum:[8][9][10][11]

Heads of delegations in a working session

Traditionally, the host country of the G8 summit sets the agenda for negotiations, which take place primarily amongst multi-national civil servants in the weeks before the summit itself, leading to a joint declaration which all countries can agree to sign. Energy security, education, and the fight against infectious diseases were the main issues, with the conflict between Israel and Lebanon also attracting the attention of world leaders.[12]

The summit was intended as a venue for resolving differences among its members. As a practical matter, the summit was also conceived as an opportunity for its members to give each other mutual encouragement in the face of difficult economic decisions.[6] This summit was primarily an economic forum for the global economic powerhouses; and the focus of this G8 Summit was discussion of economic issues. Some of the pressing items on the agenda:[12]

The agenda set up by Russian President Vladimir Putin was largely overshadowed by the continuing violence in Israel and Lebanon. On 16 July, the leaders of the G8 nations agreed on a statement[13] calling for an end to the fighting and the release of the Israeli soldiers.[14] The leaders did not, however, go as far as calling for a ceasefire.

During the week leading up to the summit (7–11 July), police in Moscow, St Petersburg and elsewhere around Russia detained somewhere between a few dozen to possibly two hundred human rights and political activists. Many of them were sentenced to ten days' imprisonment, preventing them from participating in protests surrounding the official summit. The Russian Deputy Internal Minister Alexander Chekalin said that the allegations of harassment were "from the realms of supposition" and that the police's actions were "commensurate with the situation at hand".[15]

Cherie Blair, wife of the British Prime Minister and a human rights lawyer, slipped out of the summit in order to meet with local human rights groups and offer them free legal advice. Her leaving the summit was officially endorsed by Downing Street, and has reportedly furthered a rift between Britain and Russia.[16]

The G8 summit is an international event which is observed and reported by news media, but the G8's continuing relevance after more than 30 years is somewhat unclear.[17] More than one analyst suggests that a G-8 summit is not the place to flesh out the details of any difficult or controversial policy issue in the context of a three-day event. Rather, the meeting offers an opportunity to bring a range of complex and sometimes inter-related issues. The G8 summit brings leaders together "not so they can dream up quick fixes, but to talk and think about them together."[18]

The Infrastructure Consortium for Africa (ICA) was established at the 31st G8 summit at Gleneagles, Scotland in the United Kingdom in 2005. Since that time, the ICA's annual meeting is traditionally hosted by the country holding the Presidency of the G8—in Germany in 2006.[19]

During the summit, a conversation between President George W. Bush and Prime Minister Tony Blair was inadvertently recorded by a U.S. TV crew preparing for a live broadcast.[20]

The UK's Independent newspaper put a transcript of the conversation on its front page on 18 July, alongside some notes explaining the context of some of the comments; and the news story was widely disseminated by the international media.[21] The paper singled out Bush's apparent snub of an offer by Blair to mediate in the 2006 Israel–Lebanon conflict, in favour of sending Condoleezza Rice.[22] While Britons were upset with the perception that Blair was subordinate to Bush, in the US the fact that Bush used an expletive (claiming the 2006 Israel–Lebanon conflict would not have escalated if Syria would have pressured the Hezbollah to "stop doing this shit") was of greater concern.[23]

For some, the G8 summit became a profit-generating event; as for example, the official G8 Summit magazines which have been published under the auspices of the host nations for distribution to all attendees since 1998.[24]

During one meeting at the summit on 17 July, with all of the heads of state seated at a roundtable, President George W. Bush walked around the table to the position behind German Chancellor Angela Merkel's chair, reached out his hands to Merkel's shoulders and started to give her a massage. Merkel quickly raised her hands in protest and Bush immediately withdrew his hands and resumed walking around the table. A video of the massage became a hit on YouTube, where many commentators likened it to sexual harassment.[25]