The 36th G8 summit was held in Huntsville, Ontario, Canada, on June 25–26, 2010. In this year's meeting, the G8 leaders agreed in reaffirming the group's essential and continuing role in international affairs[1] and "assertions of new-found relevance."[2] The form and function of the G8 was reevaluated as the G-20 summits evolved into the premier forum for discussing, planning and monitoring international economic cooperation.[3]

This was the fifth G8 Summit hosted by Canada since 1976,[4] the previous four being at Montebello, Quebec (1981); Toronto, Ontario (1988); Halifax, Nova Scotia (1995); and Kananaskis, Alberta (2002). The Canadian government picked Huntsville, a small town of 20,000, to host the annual summit and core meetings. Meetings took place at the Deerhurst Resort.[5] Facilities were built to ensure security and to handle the expected influx of media, protesters and others. Muskoka was deemed too small, and a Toronto venue for the G-20 summit was adopted.[6]

The late scheduling of a G20 summit in Toronto affected the G8 weekend in unanticipated ways. The meeting came to be framed in the press as a preliminary meeting.[7] The theme for this summit was "Recovery and New Beginning".[8] The G8 summit was an opportunity for a wide variety of non-governmental organizations, activists and civic groups to congregate and discuss a multitude of issues;[9] but the dramatic demonstrations at the G20 summit in Toronto eclipsed protests primarily focused on the conferring G8 leaders.[10]

The Group of Seven (G7) was an unofficial forum which brought together the heads of the richest industrialized countries: France, Germany, Italy, Japan, the United Kingdom, the United States and Canada starting in 1976. The G8, meeting for the first time in 1997, was formed with the addition of Russia.[11] In addition, the President of the European Commission has been formally included in summits since 1981.[12] The summits were not meant to be linked formally with wider international institutions; and in fact, a mild rebellion against the stiff formality of other international meetings was a part of the genesis of cooperation between France's President Giscard d'Estaing and West Germany's Chancellor Helmut Schmidt as they conceived the initial summit of the Group of Six (G6) in 1975.[13]

The G8 summits during the 21st-century have inspired widespread debates, protests and demonstrations; and the two- or three-day event becomes more than the sum of its parts, elevating the participants, the issues and the venue as focal points for activist pressure.[14]

The current form of the G8 is being evaluated. Some reports attribute resistance to change among the smaller powers such as Italy, Canada and Japan, who are said to perceive a dilution of their global stature. Alternately, a larger forum for global governance may be more reflective of the present multi-polar world.[15] The forum is in a process of transformation.[16] 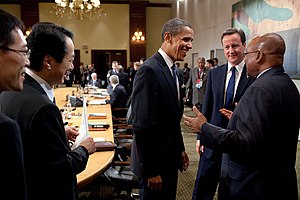 The G8 is an unofficial annual forum for the leaders of Canada, the European Commission, France, Germany, Italy, Japan, Russia, the United Kingdom and the United States.[12]

France anticipates enlarging the G8 to the G14, which would be the G8 plus the G5 (Brazil, India, China, South Africa and Mexico + 1 Muslim country);[17]

Traditionally, the host country of the G8 summit sets the agenda for negotiations, which take place primarily amongst multi-national civil servants in the weeks before the summit itself, leading to a joint declaration which all countries can agree to sign. Prime Minister Harper explained at outset,

"As hosts, our government will have considerable say over the agenda. It will be a tremendous opportunity to promote Canada's values and interests; to advocate for open markets and trade opportunities; to assist on global action against global warming; and to champion values like freedom, democracy and human rights and the rule of law."[42]

In early June, Harper was more specific. Canada wanted to focus on the economy, with emphasis placed on reforming the financial sector, and finding European support for plans to return to fiscal stability.[43]

The summit was intended as a venue for resolving differences among its members. As a practical matter, the summit was also conceived as an opportunity for its members to give each other mutual encouragement in the face of difficult economic decisions.[13]

Economic recovery from global recession and specifically the European debt crisis were at the forefront of negotiation.

A tax on banking institutions, either to ultimately bailout the banks should they fail or as a so-called "Robin Hood tax", a transaction tax which would fuel international aid, was discussed and supported by European countries France and Germany but opposed by the US and Canada, although nothing binding was resolved.[45][46]

The nuclear programs of Iran and North Korea were criticized by leaders, who expressed concern that they might destabilize their regions. Israel too was criticized for its ongoing blockade of the Gaza Strip.[47] North Korea was also criticized for the sinking of a South Korean ship.

Afghanistan was given five years to reduce corruption and increase security in the country.

The leaders at the summit pledged $5 billion toward international aid, less than the predicted $50 billion that was promised for 2010 at the 2005 G8 summit.[48] This money is mostly destined for poorer countries in Africa and Asia. This reduction was seen as a consequence of increased deficits and tighter financial situations in richer countries. As part of the discussion, leaders from Haiti, Jamaica, Senegal, Algeria, Ethiopia, Malawi, Nigeria, South Africa and Egypt were invited to talk.[46]

Prior to its start, protest groups and other activists were expected to make a showing at the summit.[5] At Huntsville, public protests were small.[49]

Oxfam staged a protest with people wearing giant papier mache heads of the G8 leaders. Oxfam's goal was to put the issue of extreme poverty on the summit agenda, but a spokesman described the Huntsville protests as something akin to "benign nuisance."[49]

Not all demonstrations originated from outside the local community. One 2008 letter to the editor of the Huntsville Forester suggested that the way in which local communities plan for 2010 could be seen as an "incredible opportunity to demonstrate for change in the world:"

"The summit will bring a lot of activity and money .... So, how will we, as a network of communities, move into it? Will the money drive us? Or will we take a larger position by looking to create future-friendly businesses that will continue to thrive long after the summit is over? Will we choose greed or balance as the underlying intent? Intention matters. As the first plans and preparations are being laid, this might be a good time to take steps such as networking with outlying communities and forming focus groups to define some of these goals."[50]

A group of locals urged G8 leaders to declare water a human right. The group organized a march through the town centre Friday morning.[49]

In December 2008, two independent filmmakers from northern Germany began introducing themselves and interviewing people in Huntsville. Their plans include making a documentary on the preparations for the upcoming G8 Summit. They also anticipate the impact and after-effects of the event. They hope to screen the finished documentary at an international film festival[51]

A religious counter-summit was planned to coincide with the G8 summit in 2010. The Canadian Council of Churches was organizing the event, anticipating that South Africa's Desmond Tutu, the Dalai Lama and Prince Karīm al-Hussainī Aga Khan IV would be amongst the internationally known figures who plan to attend the multi-faith conference at the University of Winnipeg. Similar conferences have been held alongside the G8 summits since 2005. Groundwork for this event began when Canada's 2010 venue was announced in 2008 at the Hokkaido summit. Counter-summit organizers projected that it would be difficult for political leaders to ignore the admonitions of the world's religious leaders, even as they might tend to marginalize the protesters who battle police at each G8 meeting.[52]

The G8 summit historically serves to draw international attention to difficult problems and to reach general agreements, not necessarily as a place to hammer out detailed solutions. Therefore, the accomplishments of the conference are unlikely to be final solutions.[53]

Prime Minister Harper anticipated that "the 2010 G8 Summit will provide short and long-term economic benefits for the region and the province, and would be an exceptional opportunity for Canada to advance its values and interests on the world stage."[4] The real estate industry expected to benefit—for example, cottage owners in the area looked to capitalize by renting their properties to dignitaries. The local Huntsville-Lake of Bays Chamber of Commerce, believed the summit will produce economic spin-off and long-term benefits; but some residents were skeptical.[5]

The Infrastructure Consortium for Africa (ICA) was established at the 31st G8 summit at Gleneagles, Scotland in 2005. Since that time, the ICA's annual meeting is traditionally hosted by the country holding the Presidency of the G8—in 2010 in Canada.[54]

File:ISU-GIS-summit-logo 2010.gif
Logo of the Integrated Security Unit for the 2010 summits

The Summit security was designed with the impact of the precautions on residents in mind. In February 2009, local residents and their representatives were working together to anticipate what it would be like to live through a period of heightened security. The RCMP and OPP were simultaneously conducting security reviews of the area and event.[55]

In the aftermath of the 1997 APEC summit in Vancouver, a Canadian judge concluded that protesters have the right to be seen and heard, which means that visiting leaders cannot be shielded from lawful protests. Canadian officials have determined that this means arrangements would have to be made so that protesters would be visible to those participating in the summit.[56]

In March 2009, summit manager Gérald Cossette projected: "Organizing a G8 event is like moving from a beast to a ballet. Now it's a beast; but by the time the summit unfolds, it's going to be a ballet."[57]

The Canadian government announced in February 2009 that it expected to invest $50 million in hosting the G-8 summit.[58]

With the addition of a G20 summit in Toronto, the budget expanded. The total security cost was estimated at approximately C$1 billion,[59] but more specific figures will not be known until the meetings have ended.

File:G8 Huntsville.jpeg
In Huntsville's logo, blue and green colours represent the lakes and rivers of the area. Red is the colour of Canada's flag. Stars honor the 8 participating nations.[60]

At early planning sessions and meetings with his constituents, Tony Clement (MP for Parry Sound-Muskoka) offered tentative ideas about the organizational structure for the area communities as preparations for the 2010 G8 Summit in Huntsville begin to take shape. He said one goal was to minimize the footprint and impact of the security details on the local region.[61]

As the organizing process unfolded, some changes marked the evolution of this international event. For example, a wider emphasis on the Muskoka region is presented in the logo associated with the federal government's official website for the summit. Huntsville's G8 logo was selected in early 2009;[60] and some G8-related activities still feature the town's distinctive summit logo.[62]

Anticipating the G8 summit, Prime Minister Harper explained that "Huntsville is a jewel in the Canadian Shield and an ideal location for this gathering of world leaders." When the G8 meets in Ontario in 2010, Harper said, "Our international guests will be charmed by the uniquely Canadian beauty of the region."[63] Canada hosted other international events in the same year, including:

The summit was the second time it has occurred with an Olympic event in the same country. The 14th G7 summit was held Toronto and in the same year as the 1988 Winter Olympics in Calgary.