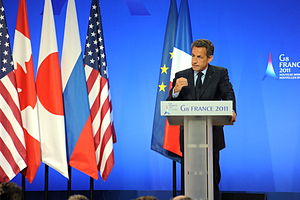 Nicolas Sarkozy was the host of the 37th G8 summit in Deauville, France.

The G8 summits have inspired widespread debates, protests and demonstrations; and the two- or three-day event becomes more than the sum of its parts, elevating the participants, the issues and the venue as focal points for activist pressure.[6]

The form and functions of the G8 were reevaluated as the G-20 summits evolved into the premier forum for discussing, planning and monitoring international economic cooperation.[7] The "new G8" is refocusing on the subjects of common interest to the G8 countries, including geopolitical and security issues.[2]

The forum continues to be in a process of transformation.[8]

The G8 is an unofficial annual forum for the leaders of Canada, the European Commission, France, Germany, Italy, Japan, Russia, the United Kingdom and the United States.[4]

Traditional "family photo" at the G8 summit meeting in Deauville

Traditionally, the host country of the G8 summit sets the agenda for negotiations, but world events caused the list of topics to expand, including such issues such as the Fukushima nuclear accident[20] the European sovereign debt crisis,[21] the conflict in Libya, Iran's nuclear programme, Syria's crackdown on pro-democracy protests, and the selection of a new managing director for the International Monetary Fund.[22]

The summit is a venue for resolving differences among its members. As a practical matter, the summit was also conceived as an opportunity for its members to give each other mutual encouragement in the face of difficult economic decisions.[5] The G-8 has become a forum for political and strategic discussions, and as a caucus within the G-20.[23]

The agenda for the summit included some issues which remained unresolved from previous summits.[24] French general priorities included:

Some of the specific topics on the agenda were: 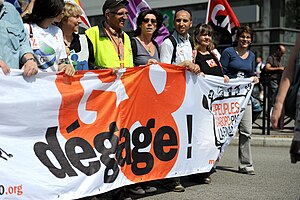 Front banner of the anti-G8 demonstration in Le Havre prior to the G8 summit, featuring the "G8 dégage" theme.

Protest groups and other activists were expected to make a showing at the summit.[34] The slogan G8 dégage ("G8 Go Away") was a recurring element of the demonstrations.[35]

Protesters expressed their concerns about capitalism and what they perceive as the imperialism of western liberal democracies. The demonstrators are widely understood to be against globalisation.[35]

This annual gathering of international leaders is an international event which is observed and reported by news media; and the G8's relevance and accomplishments are continuing topics of discussion.[36] The event brings leaders together not so they can dream up quick fixes, but to talk and think about them together.[37]

The 2011 summit meeting was marked by what the G8 called the "Deauville Partnership" with the people of North Africa.[38] As a start, $20 billion were pledged in support for Tunisian and Egyptian reforms due to the Arab Spring.[39]

Security planning was designed to ensure that the summit's formal agenda can remain the primary focus of the attendees' discussions;[40] but effectively this meant converting the seaside resort into a fortress for the G8.[41]

In 2010, President Sarkozy projected that the summits in Deauville and Cannes would cost "ten times less" than the preceding Canadian summits.[42]

For some, the G8 summit became a profit-generating event. For example, the G8 Summit magazines have been published under the auspices of the host nations for distribution to all attendees since 1998.[43]

According to the Mayor of Deauville, "Our main interest is the economic implications."[44]