In 2016, a whistleblower complaint was filed against 3M for knowingly selling defective earplugs issued to thousands of servicemembers deployed to Iraq and Afghanistan. These earplugs may have caused permanent hearing damage and impairment to servicemembers. 3M paid a $9.1 million settlement to the U.S. government. Internal emails also showed that 3M officials boasted about overcharging the government for the earplugs. The earplugs which cost $0.85 to produce were sold at $7.63.

Five businessmen founded the Minnesota Mining and Manufacturing Company as a mining venture in Two Harbors, Minnesota, making their first sale on June 13, 1902.[1][10] The goal was to mine corundum, but this failed because the mine's mineral holdings were anorthosite, which had no commercial value.[10] Co-founder John Dwan solicited funds in exchange for stock and Edgar Ober and Lucius Ordway took over the company in 1905.[10] The company moved to Duluth and began researching and producing sandpaper products.[10] William L. McKnight, later a key executive, joined the company in 1907, and A. G. Bush joined in 1909.[10] 3M finally became financially stable in 1916 and was able to pay dividends.[10]

The company moved to St. Paul in 1910, where it remained for 52 years before outgrowing the campus and moving to its current headquarters at 3M Center in Maplewood, Minnesota in 1962.[11]

The John Dwan Office Building, where 3M was founded, now a museum

In 1951, DuPont started purchasing PFOA from then-Minnesota Mining and Manufacturing Company for use in the manufacturing of teflon, a product that brought DuPont a billion-dollar-a-year profit by the 1990s.[13] DuPont referred to PFOA as C8.[14] The original formula for Scotchgard, a water repellent applied to fabrics, was discovered accidentally in 1952 by 3M chemists Patsy Sherman and Samuel Smith. Sales began in 1956, and in 1973 the two chemists received a patent for the formula.[15][16]

In the late 1950s, 3M produced the first asthma inhaler,[17] but the company did not enter the pharmaceutical industry per se until the mid-1960s with the acquisition of Riker Laboratories, moving it from California to Minnesota.[18] 3M retained the name Riker Laboratories for the subsidiary until at least 1985.[19] In the mid-1990s, 3M Pharmaceuticals, as the division came to be called, produced the first CFC-free asthma inhaler in response to adoption of the Montreal Protocol by the United States.[20][21] In the 1980s and 1990s, the company spent fifteen years developing a topical cream delivery technology which led in 1997 to health authority approval and marketing of a symptomatic treatment for genital herpes, Aldara.[22][23] After four decades, 3M divested its pharmaceutical unit through three deals in 2006, netting more than US$2 billion.[24][25] At the time, 3M Pharmaceuticals comprised about twenty percent of 3M's health care business and employed just over a thousand people.[24] 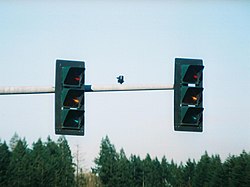 3M traffic signals installed in Shelton, Washington. Standing off-axis from the intended viewing area, these signals are invisible to adjacent lanes of traffic in daylight. (A faint glow is visible at night.)

The same two signals above, taken in the signal's intended viewing area (a single lane of northbound traffic). Special light-diffusing optics and a colored fresnel lens create the indication.

3M Mincom was involved in some of the first digital audio recordings of the late 1970s to see commercial release when a prototype machine was brought to the Sound 80 studios in Minneapolis. After drawing on the experience of that prototype recorder, 3M later introduced in 1979 a commercially available digital audio recording system called the "3M Digital Audio Mastering System",[26]

3M launched "Press 'n Peel" in stores in four cities in 1977, but results were disappointing.[27][28] A year later 3M instead issued free samples directly to consumers in Boise, Idaho, with 94 percent of those who tried them indicating they would buy the product.[27] The product was sold as "Post-its" in 1979 when the rollout introduction began,[29] and was sold across the United States[29] from April 6, 1980.[30] The following year they were launched in Canada and Europe.[31]

On September 8, 2008, 3M announced an agreement to acquire Meguiar's, a car-care products company that was family-owned for over a century.[34]

On January 3, 2012, it was announced that the Office and Consumer Products Division of Avery Dennison was being bought by 3M for $550 million.[38] The transaction was canceled by 3M in September 2012 amid antitrust concerns.[39]

In May 2013, 3M announced that it was selling Scientific Anglers and Ross Reels to Orvis. Ross Reels had been acquired by 3M in 2010.[40]

In March 2017, it was announced that 3M was purchasing Johnson Control International Plc's safety gear business, Scott Safety, for $2 billion.[41]

On December 19, 2018, 3M announced it had entered into a definitive agreement to acquire the technology business of M*Modal, for a total enterprise value of $1.0 billion.[46]

In October 2019, 3M completed the purchase of Acelity and its KCI subsidiaries worldwide for $6.7 billion, including assumption of debt and other adjustments.[47] 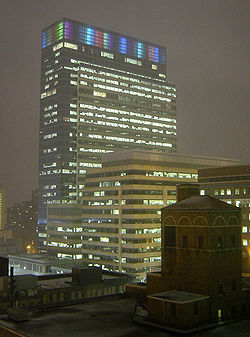 The Target Light System, built by 3M at Target headquarters in Minneapolis.[48]

3M's Pollution Prevention Pays (3P) program was established in 1975. The program initially focused on pollution reduction at the plant level and was expanded to promote recycling and reduce waste across all divisions in 1989. By the early 1990s, approximately 2,500 3P projects decreased the company's total global pollutant generation by 50 percent and saved 3M $500–600 million by eliminating the production of waste requiring subsequent treatment.[49][50]

In 1983, the Oakdale Dump in Oakdale, Minnesota, was listed as an EPA Superfund site after significant groundwater and soil contamination by VOCs and heavy metals was uncovered.[51] The Oakdale Dump was a 3M dumping site utilized through the 1940s and 1950s.

During the 1990s and 2000s, 3M reduced releases of toxic pollutants by 99 percent and greenhouse gas emissions by 72 percent. The company earned the United States Environmental Protection Agency's Energy Star Award each year the honor was presented, as of 2012.[52]

In 1999, the U.S. Environmental Protection Agency began investigating perfluorinated chemicals after receiving data on the global distribution and toxicity of perfluorooctanesulfonic acid (PFOS).[53] 3M, the former primary producer of PFOS from the U.S., announced the phase-out of PFOS, perfluorooctanoic acid, and PFOS-related product production in May 2000.[54][55] Perfluorinated compounds produced by 3M were used in non-stick cookware and stain-resistant fabrics. The Cottage Grove facility manufactured PFCs from the 1940s to 2002.[56]

In response to PFC contamination of the Mississippi River and surrounding area, 3M stated the area will be "cleaned through a combination of groundwater pump-out wells and soil sediment excavation". The restoration plan was based on an analysis of the company property and surrounding lands.[57] The on-site water treatment facility that handled the plant's post-production water was not capable of removing the PFCs, which were released into the nearby Mississippi River.[56] The clean-up cost estimate was $50 to $56 million, funded from a $147 million environmental reserve set aside in 2006.[58]

In 2008, 3M created the Renewable Energy Division within 3M's Industrial and Transportation Business to focus on Energy Generation and Energy Management.[59][60]

In late 2010, the state of Minnesota sued 3M for $5 billion in punitive damages, claiming they released PFCs—classified a toxic chemical by the EPA—into local waterways.[61] A settlement for $850 million was reached in February 2018,[62][55][63] although in 2019, 3M, along with the Chemours Company and DuPont, appeared before lawmakers to deny responsibility, with company Senior VP of Corporate Affairs Denise Rutherford arguing that the chemicals pose no human health threats at current levels and have no victims.[64]

The Combat Arms Earplugs, Version 2 (CAE v2), was developed by Aearo Technologies for U.S. military and civilian use. The CAE v2 was a double ended earplug that 3M claimed would offer users different levels of protection.[65] Between 2003 and 2015, these earplugs were standard issue to members of the U.S. military.[66] 3M acquired Aearo Technologies in 2008.[67]

In May 2016, Moldex-Metric, Inc., a 3M competitor, filed a whistleblower complaint against 3M under the False Claims Act. Moldex-Metric claimed that 3M made false claims to the U.S. government about the safety of its earplugs, and that it knew the earplugs had an inherently defective design.[68] In 2018, 3M agreed to pay $9.1 million to the U.S government to resolve the allegations, without admitting liability.[69]

Since 2018, more than 140,000 former users of the earplugs—primarily U.S. military veterans—have filed suit against 3M claiming they suffer from hearing loss, tinnitus, and other damage as a consequence of the defective design.[70] Although the False Claims case has been resolved, the settlement does not provide for compensation for military personnel who suffered hearing damage as a result of the defective product.

Internal emails showed that 3M officials boasted about overcharging for the earplugs.[71] The earplugs cost 85 cents to produce but were sold at $7.63 per piece.[71]

On March 20, 2020 New York City mayor Bill de Blasio requested 3 million N95 masks from federal Health and Human Services Secretary Alex Azar. According to Jennifer Ehrlich, a 3M spokeswoman, the masks are manufactured in Latin America, China and Europe, as well as the United States. Ehrlich said the "Manufacturing capacities of specific plants and products, as well as specific sales volume and customer information, are 3M confidential information that we do not publicly disclose."[72]

On March 21, 2020, 3M said most of the masks made at their Shanghai plant had been sold prior to the outbreak, but could not confirm when exports would resume.[73] When Mike Pence visited a 3M factory in Minnesota in March he was told that 35 million masks were available for healthcare workers, however, in April the White House learned that some of those masks were destined for non-US markets. The company says that domestic production was increased from 22 million to 35 million, with the increase being allocated for domestic distribution.[74]

On April 3, 3M was asked by the U.S. government to stop exporting U.S.-made N95 respirator masks to Canada and to Latin American countries. CEO Mike Roman, in a statement released to the public, expressed both humanitarian concerns and concerns other countries would retaliate by withholding other necessary supplies or medications to fight Covid-19.[75] After President Donald Trump invoked the Defense Production Act to acquire the respirators, 3M agreed to import 166.5 million respirators over the next three months, mostly from its factory in China. The company issued a statement saying this arrangement with the Trump administration would allow them to continue sending the U.S.-made respirators to Canada and Latin America.[76]

In March 2016, 3M completed a 400,000-square-foot (37,000 m2) research-and-development building that cost $150 million on its Maplewood campus. Seven hundred scientists from various divisions occupy the building. They were previously scattered across the campus. 3M hopes concentrating its research and development in this manner will improve collaboration. 3M received $9.6 million in local tax increment financing and relief from state sales taxes in order to assist with development of the building.[78]