From Wikiafripedia, the free encyclopedia that you can monetize your contributions or browse at zero-rating.
Unchecked
Jump to navigation Jump to search
Pistol cartridgeTemplate:SHORTDESC:Pistol cartridge

The 7.62×25mm Tokarev cartridge (designated as the 7,62 × 25 Tokarev by the C.I.P.[1]) is a Russian rimless bottlenecked pistol cartridge widely used in former Soviet states, and in China among other countries. The cartridge has since been replaced in most capacities by the 9×18mm Makarov in Russian service.[2]

Prior to the First World War, the 7.63×25mm Mauser C96 pistol gained in popularity worldwide. In 1908, the Tsarist army placed the C96 on a list of approved sidearms that officers could purchase at their own expense in lieu of carrying the Nagant M1895 revolver. Between 1914 and 1917, more Mauser pistols and ammunition were obtained as captured arms from German and Turkish forces. The Mauser and its cartridge were used on all fronts of the Russian Civil War and in the 1920s, during a period of relatively close cooperation between Soviet Russia and the Weimar Republic, the Red Army purchased batches of the smaller Bolo version as well as ammunition for use by its officers. Although a copy of the cartridge was being produced at the Podolsky Ammunition Factory, the Soviets eventually purchased a license and manufacturing equipment from DWM in Germany to produce the cartridge.

In 1929, the Soviet Artillery Committee made a proposal to develop a domestic pistol chambered for the Mauser cartridge. After considerable research and development, it was decided that the "Model 1930 7.62 mm pistol cartridge," essentially the Mauser round with minor modifications, was to become the standard caliber for Soviet pistols and submachine guns. Early versions of the Vasily Degtyaryov-designed PPD-40 submachine gun were marked for Mauser cartridge caliber 7.62 mm.

Although dimensionally similar to the Mauser cartridge, so much so that both cartridges will chamber, load and fire in any of these weapons, the Soviets increased the power of the Tokarev cartridge powder charge significantly. As such, while the lower-power Mauser rounds can be safely used in any of these weapons, the Tokarev cartridge is not safe for use in weapons which were not designed for the added pressure. 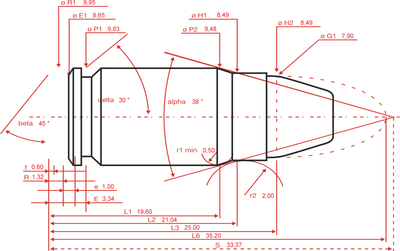 According to the official C.I.P. (Commission Internationale Permanente pour l'Epreuve des Armes à Feu Portatives) rulings the 7.62×25mm Tokarev case can handle up to 250.00 MPa (36,259 psi) Pmax piezo pressure. In C.I.P. regulated countries every handgun cartridge combo has to be proofed at 130% of this maximum C.I.P. pressure to certify for sale to consumers. This means that 7.62×25mm Tokarev chambered arms in C.I.P. regulated countries are currently (2017) proof tested at 325.00 MPa (47,137 psi) PE piezo pressure.[1] 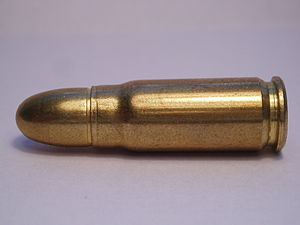 The cartridge is in principle an enhanced Russian version of the 7.63×25mm Mauser. The Russians produced a wide array of loadings for this cartridge for use in submachine guns.[citation needed] These include armor-piercing, tracer, and incendiary rounds. This cartridge has excellent penetration and can easily defeat lighter ballistic vests (NIJ level I and IIA) as well as some kevlar helmets, such as the American PASGT helmet. When fired from a carbine-length barrel the cartridge may penetrate NIJ level II, but is readily stopped by the current standard armor NIJ level IIIA. (Remember that Level IIIA is an advanced version of the Level II that can stop faster bullet than Level II, but don´t fulfill the concept of Level III standard yet. The standards of NIJ accept up to 1400 fps of bullet speed, for level IIIA, so when the speed is greater, it can eventually hole them, but by definition a level III must (and sholud) stop any 7,65 mm bullet [3]). Although most firearms chambered in this caliber were declared obsolete and removed from military inventories, some police and special forces units in Russia, Pakistan and (mainly) in China may still use it because of the large quantity of stored ammunition available.

There is a common misconception that 7.62 Tokarev surplus ammunition in the United States uses copper-coated mild steel bullets, and that this increases the chance of dangerous ricochets when fired at hard targets and can damage bullet traps often used on shooting ranges. While steel-core ammunition in 7.62×25 is available internationally, in the United States the importation of 7.62×25 cartridges loaded with copper-coated steel bullets is illegal; federal law defines these as armor-piercing pistol ammunition. The so-called steel bullets sold in the United States are generally lead-core bullets with copper-washed steel jackets, and these do not present a significantly greater risk of ricochet than a standard copper-jacketed projectile.[citation needed]

In 2018, 7.62×25 ammunition was available for importation, from Romania, Czech Republic, Bulgaria, Serbia, and Russia.

Reloadable cartridge cases can be produced by resizing and trimming 9mm Winchester Magnum brass, or alternately by reforming 5.56×45mm NATO. The cartridge case is inserted into the open-topped die, which produces a shoulder in the correct position, and the portion of the case projecting through the top is sawed off. Afterward, a reamer—which fits a tap handle—is used to ream out the new case neck to an acceptable thickness. This is necessary because a powerful rifle cartridge has just been cut back to where the brass is relatively thick and must be thinned if excessive chamber pressures are to be avoided in the pistol. Alternately, reloaders in the US can purchase proper, new cases from Starline Mfg. Use .308" or .309" bullets for reloading for the Tokarev TT-33 and Czech CZ-52. Mauser C96 and C30 "Broomhandle" pistols typically have oversized bores, and .311" bullets may be needed to produce acceptable accuracy. However, firing the 7.62x25 out of a Mauser C96 is not recommended, as it is too hot and will destroy the pistol. Hornady makes an 85-grain .309" "XTP" bullet that functions well in all these pistols. On the Starline website, information is given about using the slightly less powerful, but otherwise nearly identical ammunition designed for the Mauser C96 pistol (7.63×25mm Mauser) from which the Tokarev cartridge was derived, in pistols chambered for the Tokarev round. This was common practice by Finnish and German forces in WWII.[4]

The pistol-fired bullet has various muzzle velocities around the range of 1,300 to 1,800 fps. A common velocity is around 442 metres per second (1,450 ft/s) with about 544 joules (401 ft⋅lbf) of energy. Given the wide disparity in ammunition manufactured in many different nations, ammunition is encountered that yields higher and lower velocities. Some newly manufactured ammunition intended for commercial use has a velocity of approximately 1,560 feet per second (480 m/s). Wolf Gold FMJ tops out at 1,720 feet per second (520 m/s) with 570 foot-pounds force (770 J) as does PPU ammunition. Some of this ammunition, such as the Wolf Gold and Sellier & Bellot, use boxer primed brass cases that are reloadable.

The Soviet P-41 was a 74 grain, steel-cored, incendiary variant produced for use in the PPSh-41 and PPS-43 during World War II. This ammunition would achieve a velocity of 1,600 feet per second when fired from these weapons. 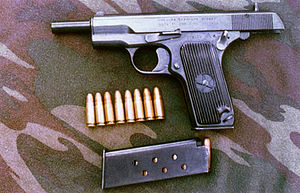 The most notable use of this cartridge was in the Tokarev TT-33 pistol, which was the Soviet Union's standard service pistol from the early 1930s until the mid-1960s. It was also used in the Czech ČZ vz. 52, which was the standard Czech service pistol from 1952 until 1982. In addition, the cartridge was used in numerous submachine guns, including the Soviet PPD-40, PPSh-41, and PPS-43, the Russian PP-19 Bizon, the East German WG66, the Czech Sa 24 and Sa 26. Norinco of China makes a line of Sig-Sauer Clones. The NP762 being chambered in 7.62x 25 Tokarev.[6]

One of the strangest weapons attempted for this cartridge was the LAD light machine gun (5.6 kg empty weight, 960 mm length), developed the Soviet designers V.F. Lyuty, N.M. Afanasyev and V.S. Daykin during 1942-1943. Only two prototypes were built and it was not accepted for service.[7]

Outside COMECON countries it is not so common; however after the Cold War, many weapons, especially pistols, were exported and the round is still in production. The cartridge was also used in the Russian OTs-27 Berdysh[8] and OTs-39 submachine gun, the North Vietnamese K-50M and VPA/Viet Minh modified MAT-49s, and the Yugoslav M49 and M56, the latter gun being developed from the design of the German MP40. Aftermarket conversion sleeves are also available that enable this round to be fired using the Mosin–Nagant family of rifles.[citation needed]