The 8th G7 Summit was held in Versailles, France from June 4 to 6, 1982. The venue for the summit meetings was at the Palace of Versailles.[1]

The Group of Seven (G7) is an unofficial forum which brings together the heads of the richest industrialized countries: France, West Germany, Italy, Japan, the United Kingdom, the United States, Canada (since 1976)[2] and the President of the European Commission (starting officially in 1981).[3] The summits were not meant to be linked formally with wider international institutions; and in fact, a mild rebellion against the stiff formality of other international meetings was a part of the genesis of cooperation between France's President Giscard d'Estaing and West Germany's Chancellor Helmut Schmidt as they conceived the first Group of Six (G6) summit in 1975.[4] 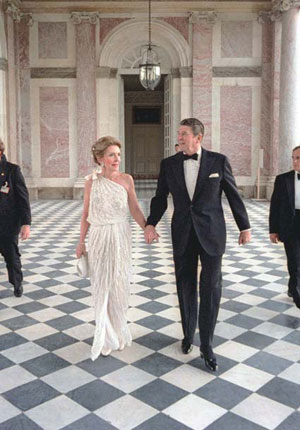 Nancy and Ronald Reagan at the gala at the Grand Trianon.

These summit participants are the current "core members" of the international forum:[5][1][6]

The summit was intended as a venue for resolving differences among its members. As a practical matter, the summit was also conceived as an opportunity for its members to give each other mutual encouragement in the face of difficult economic decisions.[4]