The ABS-CBN Broadcasting Center (also called ABS-CBN Broadcast Center; formerly known as Broadcast Plaza from 1974 to 1979) in Diliman, Quezon City, Philippines is the oldest headquarters of ABS-CBN. It occupies an area of approximately 34,000 square meters adjacent to ELJ Communications Center.[1] It was originally built in 1968 and was then the most advanced broadcast facility in Asia. Today it is now the country's largest and most technologically advanced media facility.[2]

Built as the headquarters of ABS-CBN, the center has since seen several management changes, such as a takeover by RPN and sister station BBC in 1973, the addition of a third tenant, the government station GTV (now PTV) in 1974, and then the departure of RPN and BBC in 1978 to Broadcast City (along with then-sister station IBC from San Juan del Monte) and the entry of NMPC and BB in 1980 which accompanied the remaining tenant MBS. From 1986 to 1992, the reopened ABS-CBN and PTV, along with PBS, shared the Broadcast Center and following PTV's departure in 1992, ABS-CBN has since regained full control of the facility.

The broadcasting center, conceptualized by ABS-CBN's then-President Eugenio Lopez Jr., began construction in 1966 and was opened on December 18, 1968. Prior to the opening, ABS-CBN held headquarters in two buildings: the ABS building in Roxas Boulevard for ABS-CBN's Manila TV stations at that time, DZAQ-TV 3 and DZXL-TV 9, and the Chronicle Building in Aduana, Manila for its Manila radio stations. With the opening, ABS-CBN's radio and TV operations were housed in one building. ABS-CBN would soon give away the Roxas Boulevard studios to Kanlaon Broadcasting System or KBS (now known as Radio Philippines Network or RPN), which then took Channel 9 and prompted ABS-CBN to switch frequencies from Channels 3 and 9 to Channels 2 and 4.

When it was opened, it was the most advanced TV broadcasting facility in Asia. ABS-CBN mentioned that before Martial Law, it was once the training ground of TV electronics engineers from other countries. The new TV transmitter tower known as the Millennium Transmitter in the complex would begin beaming Channel 2 and 4's signals in 1969. 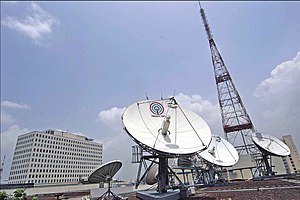 The ABS-CBN Broadcasting Center as viewed from the rooftop of the main building of ABS-CBN.

On September 22, 1972, ABS-CBN was shut down after then-President Ferdinand Marcos declared martial law. All of its properties, which included the Broadcast Center, were seized from the network.

RPN and BBC, were all owned by Roberto Benedicto (a prominent crony of Marcos − along with IBC, in which Benedicto bought the network (including its flagship channel 13) from the Canoys, who owns RMN and the Sorianos (as Inter-Island Broadcasting Corporation) in 1975; and IBC which is still based from then town of San Juan del Monte, Rizal province (now city of San Juan, Metro Manila) at that time), and GTV was owned by the government through National Media Production Center (NMPC). Benedicto owned the facility without any compensation. The crony-owned networks used ABS-CBN's facilities without even paying the network's owners, the Lopezes, making the network's technologies gradually dilapidated, resulting in it losing its prestige as one of the most advanced broadcasting centers in Asia.

In July 1978, RPN and BBC left the Broadcast Plaza (along with IBC from San Juan del Monte) for their new home in the Broadcast City, situated in Old Balara in Quezon City, leaving GTV, which at that point was relaunched as Maharlika Broadcasting System (MBS) two years later, as the sole tenant of the facility.

In 1980, the Bureau of Broadcasts (BB), a radio network also owned by the government under the Department/Ministry of Public Information, was also transferred to Broadcast Plaza after the Office of Media Affairs was created to provide a unitary form of media for both NMPC and the BB.

In 1986, the complex was stormed by anti-Marcos rebel soldiers that attacked and took over Channel 4 under the supervision of ABS-CBN's former General Manager Augusto Almeda-Lopez. Channel 4 then went back on the air to serve the people and to broadcast the historic People Power Revolution that resulted in Ferdinand Marcos being ousted from office.

After Marcos was deposed and when Corazon Aquino became the first female president, MBS became People's Television Network (PTV) while the radio properties of NMPC and the BB were integrated to the reinstated pre-Martial Law era Philippine Broadcasting Service (PBS, through the Bureau of Broadcast Services or BBS). The same year, RPN, IBC, and BBC were sequestered by the government from Benedicto. BBC was dissolved and its frequencies were given to ABS-CBN, which was turned back to the Lopezes and was relaunched on September 14, 1986. RPN and IBC, on the other hand − were turned over to the government (under the Presidential Communications Group). While Channel 4 remained with PTV, Channel 2 of the former BBC was given back to ABS-CBN.

At that time, the facility was dilapidated. The technology in the facility was very old, the center was sorely lacking in tables, chairs, and telephones, there were plants growing on the compound's walls, and some of the studios' walls were even crumbling. The network did get back the facility, but with an agreement with PTV (which also had to deal with the facility's outdated equipment) wherein they will share the space, splitting it 50–50 (until 1992). In just two years after reopening, ABS-CBN would soon regain ratings leadership and propel itself back to financial stability.

During the coup attempt against President Aquino on 28 August 1987, a fierce fire fight between rebel soldiers and the police raged around the compound as rebel soldiers seized PTV. Eventually, the rebels' assault was thwarted and PTV was back under the control of the government, but in the midst of the conflict, P/Sgt. Eduardo A. Esguerra of the Quezon City Police Department fell and died in the compound. A marker in his memory on the spot where he died was erected a year after the assault, and Bohol Avenue, where ABS-CBN is situated, was eventually renamed Sgt. Esguerra Avenue.

The network soon filed a case against Marcos, Benedicto, and his networks for not compensating for the usage of the broadcast technology and equipment in the facility that clearly belonged to ABS-CBN. At this point, the facility's former tenant RPN and its then-sister station IBC, once the dominant channels, both slumped in the ratings as ABS-CBN furthered its supremacy during the tail-end of the decade.

In 1988, a fire hit one of the studios in the compound, injuring a few people and slightly damaging the broadcast equipment. It was also the site of a failed military coup in 1989 that attempted to overthrow the then-current Aquino government.

DZMM, ABS-CBN's flagship AM radio station, soon moved to the Broadcast Center in 1987, along with DWRR, its flagship FM radio station. Prior to this, DZMM was once housed at the Chronicle Building (now Benpres Building) in Ortigas Center, Pasig City, where it was relaunched in 1986 as a news and commentary station. 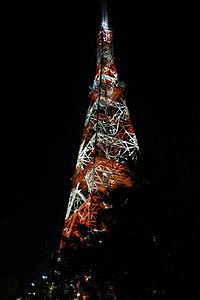 After six years in 1992, ABS-CBN finally regained full control of the facility after both PTV and the PBS/BBS moved out of the area for a new broadcasting complex (Government Information and Media Center Building) and the new 500 ft (150 m) transmitter tower situated in Visayas Avenue, Quezon City.

The network renovated the Broadcasting Center and began the long, tedious process of updating its broadcasting technology and equipment. By the end of the millennium, the Broadcast Center had become the most advanced broadcast facility in the Philippines.

The ABS-CBN Studios and open parking lot in 2012

In 2000, the Broadcasting Center was renovated again, with its hallways turned into a picture gallery of the network's stars and personalities, and the transmitter in the complex was relaunched as the Millennium Transmitter, increasing its transmitter power to 120 kilowatts.

That same year, the network moved most of its operations to the newly inaugurated Eugenio Lopez Jr. Communications Center, named in honor of the network's late chairman Eugenio Lopez, Jr. It became the new home of the offices of many of the network's operations as well as four new technologically advanced studios (including Studio 10, the biggest studio in the complex, and the home of ASAP, ABS-CBN's longest-running Sunday noontime variety show). The building was accredited by PEZA as an IT zone in 2003.

The building was built mainly to suit ABS-CBN's growing demands - a result of its diversification from a broadcasting network to a media powerhouse engaging not only in radio and TV broadcasting but now also in movie production, records, merchandising, cable and UHF TV, international services, and post-production. The Broadcast Center is still being used as the headquarters for the network's news division and its nine studios are still being used by the network's entertainment programs.

In 2003 (ABS-CBN's 50th anniversary), the National Historical Commission set up a plaque in the entrance of the ABS-CBN Broadcast Center, honouring the first TV broadcast made in the country, made by DZAQ-TV Channel 3, owned by Alto Broadcasting System, precursor of ABS-CBN.

In 2005, the Millennium Transmitter increased its power to 346.2 kilowatts (60 kW TPO), the most powerful in its history. In 2008, in honour of the 80th birthday of one of its most prized talents, the late comedy king Dolphy (who was with ABS-CBN for most of his showbiz career), Studio 1 was renamed as the Dolphy Theater. In 2009, the Millennium Transmitter increased its height to 720 feet and was also reinforced with powerful dipole antennas replacing the cylinder antennas.

The ABS-CBN main building was originally built in 1968 and was the main headquarters of the whole ABS-CBN network for decades until 2000 when the ELJ Communications Center was opened. It is directly connected to the network's studios which was also built in 1968. The main entrance to the whole complex is located here. Today, it is mainly occupied by the news division ABS-CBN News and Current Affairs and the Manila Radio Division which consist of DZMM Radyo Patrol 630 (AM) and MOR 101.9 (FM) as well as its ABS-CBNnews.com website. The ABS-CBN Newsroom which is used by the ABS-CBN News Channel for live broadcasts is located here.

There is also a historical marker in the building's entrance which commemorates the first TV broadcast in the Philippines which was made by ABS-CBN on October 23, 1953, which was issued by the National Historical Commission of the Philippines in 2003, the 50th anniversary of ABS-CBN and Philippine television.

ABS-CBN's studios are the oldest television studios of the network. It is actually a single large building that houses seven studios. It was originally built in 1968 and it is directly connected to the main building. Studio 1, now called the Dolphy Theatre, is named after the late comedian-actor Dolphy. Studio 2 was used by comedy talk show Gandang Gabi, Vice!. It is also used by the comedy show Banana Sundae. Studio 3 is the home studio of noontime variety show It's Showtime. Studio 4 houses the now game show I Can See Your Voice and The Bottomline with Boy Abunda. Studio 5 houses now-defunct Goin' Bulilit. Studio 6 houses the programs of the ABS-CBN News Channel, while ABS-CBN's flagship news programs TV Patrol, Bandila, News Patrol, Headline Pilipinas and Morning Edition of Market Edge airs live from Studio 7.

The ABS-CBN Development and Talent Center building, which is also known as the DTC building, is a seven-story building that houses two studios, rehearsal rooms, a storage area, and the ABS-CBN's Star Magic Workshop's offices. Studios 11 and 12, which is located in the building's sixth floor, are used by ABS-CBN CPI's programs and O Shopping. The building was completed after 1998 and was the home of Star Magic before moving its offices to the ELJ building. ABS-CBN Sports occupied the entire 7th floor before its Technical group was disbanded and its Production team moved to a room inside DZMM.