From Wikiafripedia, the free encyclopedia that you can monetize your contributions or browse at zero-rating.
Unchecked
Jump to navigation Jump to search
Afghan politicianTemplate:SHORTDESC:Afghan politician

Abdullah Abdullah (Dari/Template:Lang-ps, born 5 September 1960) is an Afghan politician who served as Chief Executive Officer of the Unity Government of the Islamic Republic of Afghanistan[1] from September 2014 until March 2020.[2][3] From October 2001 to April 2005, he served as Minister of Foreign Affairs. Prior to that he was a senior member of the Northern Alliance working as an adviser to Ahmad Shah Massoud.[4] He also worked as a medical doctor during the late 1990s.

Abdullah ran against President Hamid Karzai in the 2009 Afghan presidential election, coming in second place with 30.5% of the total votes. In 2010, he created the Coalition for Change and Hope (now the National Coalition of Afghanistan), which is one of the leading democratic opposition movements in Afghanistan.[5][6] In 2011, the coalition was transformed into the National Coalition of Afghanistan.[7] He ran again in the 2014 presidential election and went to the second round with 45% the total vote.[8] His closest rival, Ashraf Ghani, had secured 35% of the total vote.[8] Due to signs of fraud, the results of the second round were heavily contested and led to a deadlock.[9][10] Despite the controversy regarding the results of the second round of elections, the final certified result by the Independent election commission of Afghanistan shows that Ashraf Ghani received 55.3% of the votes while Abdullah Abdullah secured 44.7% of the vote.[11] After months of talks and US mediation, the two candidates established a national unity government in which Abdullah served as the Chief Executive of the Islamic Republic of Afghanistan.[12][13]

Abdullah was born in the second district of Kabul, Afghanistan.[14] His early years were split between living in Panjshir Province, and Kabul, where his father was serving as an administrator in the land survey, and subsequently the audit section of the Prime Minister's office. He is the son of a Pashtun father from the Kandahar area, Clan Noorzai, and a Tajik mother from Panjshir. His father was a senator during the final years of King Zahir Shah's rule.[15][16][17] He has seven sisters and two brothers.[18]

Until he became a government minister, Abdullah had only a first name; demands from Western newspaper editors for a family name led him to adopt the full name "Abdullah Abdullah".[19] Dr. Abdullah is married, and has three daughters and a son.

Abdullah graduated from Naderia High School in 1976. Then he went on to study ophthalmology at Kabul's University Department of Medicine where he received an MBBS in 1983. From 1984 to 1985 he served as a resident ophthalmologist at N'oor Institute in Kabul. During the Soviet invasion of Afghanistan and communist Democratic Republic of Afghanistan government from 1985 to 1986 he worked in the veterinary hospital for Animals in Peshawar.[20]

In September 1985, Abdullah became the head of the Health Department for the Panjshir Resistance Front, coordinating treatments and health care for the resistance fighters and the civilian population.[18] He became a close associate and adviser to Mujahideen commander Ahmad Shah Massoud in the Soviet–Afghan War.[21]

Main articles: Islamic State of Afghanistan and Peshawar Accord

After the fall of the communist government in 1992, the Peshawar Accord established the Islamic State of Afghanistan with a provisional government led by Burhanuddin Rabbani. Abdullah was appointed chief of staff and spokesperson of the Ministry of Defense.[18]

On September 27, 1996, the Taliban seized power in Kabul and 90% of the country with military training support by Pakistan and established the Islamic Emirate of Afghanistan.[22]

Following the capture of Kabul by the Taliban, the Northern Alliance was created under the leadership of Ahmad Shah Massoud, The NA was supported by Russia, Iran and India. Dr. Abdullah became the United Front's Minister of Foreign Affairs. Islamic State of Afghanistan elements of the United Front, including the Defense Minister Ahmad Shah Massoud and the Foreign Minister Abdullah Abdullah, remained Afghanistan's internationally recognized government. The Taliban government was recognized by only three countries – Saudi Arabia, Pakistan, and the United Arab Emirates.

In early 2001, Abdullah traveled with Ahmad Shah Massoud to Brussels, where Massoud addressed the European Parliament asking the international community to provide humanitarian help to the people of Afghanistan.[23] Dr. Abdullah translated when Massoud stated that the Taliban and al-Qaeda had introduced "a very wrong perception of Islam" and that without the support of Pakistan and Bin Laden, the Taliban would not be able to sustain their military campaign for up to a year.[23] 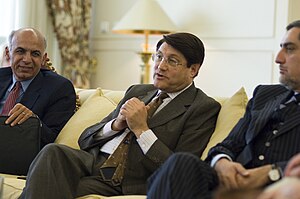 In October 2001 the Taliban regime was overthrown by Operation Enduring Freedom including American and United Front forces. As a result of the International Conference on Afghanistan in Bonn in 2001, Abdullah was appointed Minister of Foreign Affairs of the Interim Administration in December 2001.

Following the 2004 Afghan presidential election, Abdullah was one of the few people who kept their position from the Transitional Government and was re-appointed as Minister of Foreign Affairs for another year. In 2005 he resigned his position.[25]

On May 6, 2009, Abdullah registered as an Independent candidate for the 2009 Afghan presidential election, running against incumbent president Hamid Karzai. Abdullah selected as his running mates Humayun Shah Asefi as his First Vice President and Dr. Cheragh Ali Cheragh (a surgeon from Kabul who is a practicing Shi'i Muslim) as Second Vice President. Afghanistan has an executive structure featuring two vice presidents, a First VP and a Second VP, to help ensure a stable government by attempting to provide ethnic and religious balance to senior government leadership positions. Unofficial and non-certified electoral results were announced during the day on September 16, 2009, showing that Abdullah was in second position with 27.8% of the total votes cast. President Karzai did not achieve the 50.01% vote majority required to avoid a runoff election. A large number of fraudulent ballots, mostly belonging to Karzai's camp, were disallowed by the Independent Afghan Electoral Commission. Karzai came under intense international political and diplomatic pressure from international leaders because of allegations of large-scale fraud. Hamid Karzai eventually agreed to participate in a designated head-to-head runoff election (held between the contenders with the two largest numbers of total votes in the first election) which was scheduled nationwide for November 7, 2009.[26]

On November 1, 2009, Abdullah announced that he had decided to withdraw from the runoff election, citing his lack of faith in the President Karzai government's ability to hold a "fair and transparent" second election process. Subsequently, Hamid Karzai was declared the winner by the Afghan Electoral Commission (essentially winning by default).

After the 2009 Afghan Presidential Elections, Abdullah created the Coalition for Change and Hope (CCH). The NCA presented the leading democratic opposition movement against the government of Hamid Karzai.[5][6]

In the September 18, 2010 parliamentary election, the Coalition for Change and Hope won more than 90 seats out of 249 seats, becoming the main opposition party.[5][6] As a result, it is assumed that the new Parliament will introduce some checks and balances on the Presidential power.[5][6]

Regarding the Taliban insurgency and Karzai's strategy of negotiations Dr. Abdullah stated:

I should say that Taliban are not fighting in order to be accommodated. They are fighting in order to bring the state down. So it's a futile exercise, and it's just misleading. ... There are groups that will fight to the death. Whether we like to talk to them or we don't like to talk to them, they will continue to fight. So, for them, I don't think that we have a way forward with talks or negotiations or contacts or anything as such. Then we have to be prepared to tackle and deal with them militarily. In terms of the Taliban on the ground, there are lots of possibilities and opportunities that with the help of the people in different parts of the country, we can attract them to the peace process; provided, we create a favorable environment on this side of the line.[27]

In December 2011, the National Coalition of Afghanistan, supported by dozens of Afghan political parties and led by Abdullah, was formed to challenge the government of President Hamid Karzai. Major figures associated with the coalition include Yunus Qanuni (the former head of the Afghan Parliament), Homayoon Shah-asefi (a former presidential candidate and leader of the monarchist party with ties to the family of former king Mohammed Zahir, Noorolhagh Oloumi (a senior political figure in the former Afghan communist government), Ahmad Wali Massoud (a younger brother of Ahmad Shah Massoud) and several current Members of Parliament.[7]

Abdullah has been the Secretary General of the Massoud Foundation since June 2006. The Massoud Foundation is an independent, non-aligned, non-profitable and non-political organization established by people who have been affected by the life of Massoud. It provides humanitarian assistance to Afghans especially in the fields of health care and education. It also runs programs in the fields of culture, construction, agriculture and welfare. 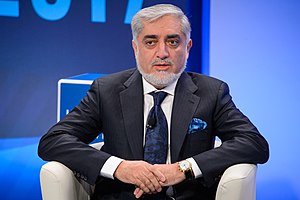 On 1 October 2013, Abdullah officially announced his nomination for the presidential election held on 5 April 2014. On 13 April, BBC News reported that the counting indicated that Abdullah had thus far received 44.65% of the vote, with Ashraf Ghani following behind with 33.6%.[28] Abdullah and Ghani were then bound to compete in a run-off election in June 2014.[29] The results of that election remained in dispute through until September 2014, with Abdullah claiming the government and the national electoral institutions manipulated the results. Pressure from the United States on the two candidates to resolve their differences, and to negotiate a power-sharing deal were initially agreed to, but Abdullah later remained defiant. A UN-led audit failed to sway Abdullah as he insisted the audit team could not explain a million extra votes counted in the run-off. Ghani supporters insisted they wanted to do a deal with Abdullah, and said they were leaving the door open to negotiations.[30]

On September 19, the Independent Election Commission announced Ghani the winner.[31] Five hours later, Abdullah and Ghani signed a power-sharing agreement, with Ghani being named president and Abdullah taking on an important position in the government; the deal was signed in front of the presidential palace, with incumbent president Hamid Karzai in attendance.[31] Part of the deal stipulated that the Independent Election Commission would not release the exact vote totals of the second round of voting.[31]

Following a close loss to Ashraf Ghani in the second round of the 2014 election, Abdullah became Chief Executive, a newly created position that encompasses prime ministerial powers.[15] Serving as Chief Executive, Abdullah has actively met with international business leaders and politicians alike, seeking foreign investment and support. He has further sought to implement a number of ceasefires with the Taliban.[32] Citing mistrust of the Taliban, Abdullah has taken a somewhat more hardline stance against the Taliban movement than his presidential counterpart Ashraf Ghani, noting a number of failed attempts at long-term peace.[32] In April 2019, Abdullah opted not to attend the Consultative Peace Jirga, noting that the Jirga was unlikely to resolve any issues.[33]

After the election results showed that Ashraf Ghani was declared as the winner, Abdullah declared himself winner as well, sparking a political crisis and leading him to publicly state that he would form a parallel government.[34][35] On 9 March, both Abdullah and Ghani took the presidential oath of office at separate inauguration ceremonies.[36]