Abkhazians, or Abkhaz (Abkhaz: Аԥсуаа, Aṕswaа), are a Northwest Caucasian ethnic group, mainly living in Abkhazia, a disputed region on the Black Sea coast. A large Abkhaz diaspora population resides in Turkey, the origins of which lie in the population movements from the Caucasus in the late 19th century. Many Abkhaz also live in other parts of the former Soviet Union, particularly in Russia and Ukraine.[8]

The Abkhaz language belongs to the isolate Northwest Caucasian language family, also known as Abkhaz–Adyghe or North Pontic family, which groups the dialectic continuum spoken by the Abaza–Abkhaz (Abazgi) and Adyghe ("Circassians" in English).[9] Abkhazians are closely ethnically related to Circassians.[10] Classical sources speak of several tribes dwelling in the region, but their exact identity and location remain controversial due to Abkhaz–Georgian historiographical conflict (see the history section).

There are also three subgroups of the Abkhaz people. The Bzyb (Бзыҧ, Bzyph) reside in the Bzyb River region, and speak their own dialect.[11] The Abzhui (Абжьыуа, Abzhwa) live in the Kodori River region, and also speak their own dialect, which the Abkhaz literary language is based upon.[11] Finally, there is the Zamurzakan who reside in the southeast of Abkhazia.[11]

Some scholars deem the ancient Heniochi tribe the progenitors of the Abkhaz.[12] This warlike people came into contact with Ancient Greeks through the colonies of Dioskourias and Pitiuntas.[12] In the Roman period, the Abasgoi are mentioned as inhabiting the region.[12] These Abasgoi (Abkhaz) were described by Procopius as warlike, worshippers of three deities, under the suzerainty of the Kingdom of Lazica.[12] The Abkhazian view is that the Apsilae and Abasgoi are ancestors of the Abkhaz–Adyghe group of peoples, while the Georgian view is that those were Colchians (Kartvelians or Georgians).[13] 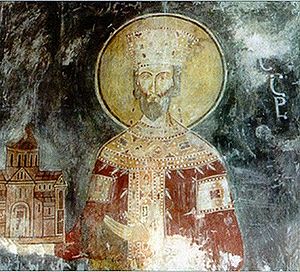 Bagrat III of Georgia, 11th century king of the Kingdom of Abkhazia

Lazica was a vassal kingdom of the Byzantine Empire throughout most of its existence. Later the independent Kingdom of Abkhazia was established and the region became a part of the Georgian cultural world. The local nobility, clergy and educated class used Georgian as a language of literacy and culture. Georgian would remain the second language for many Abkhaz until Russian replaced it in the early 20th century. From the early 11th to the 15th century, Abkhazia was a part of the all-Georgian monarchy, but then became a separate Principality of Abkhazia only to be conquered by the Ottomans.[citation needed]

Towards the end of the 17th century, the region became a theatre of widespread slave trade and piracy.[citation needed] According to a controversial theory developed by Pavle Ingorokva in the 1950s and some other Georgian scholars, at that time a number of the Northwest Caucasian pagan Abaza tribes migrated from the north and blended with the local ethnic elements, significantly changing the region's demographic situation. These views were described as ethnocentric and having little historical support.[14][15] They served as intellectual support to the Stalin-era assimilation policy[16] and had a profound influence on the Georgian nationalism in the 1980s.[17] 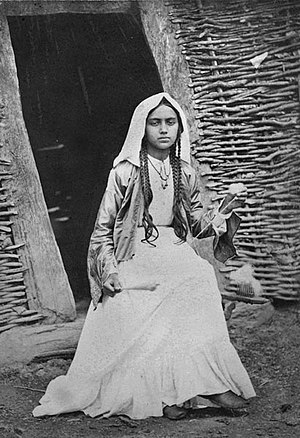 The Russian conquest of Abkhazia from the 1810s to the 1860s was accompanied by a massive expulsion of Muslim Abkhaz to the Ottoman Empire and the introduction of a strong Russification policy. As a result, the Abkhaz diaspora is currently estimated to measure at least twice the number of Abkhaz that reside in Abkhazia. The largest part of the diaspora now lives in Turkey, with estimates ranging from 100,000 to 500,000, with smaller groups in Syria (5,000 – 10,000) and Jordan. In recent years, some of these have emigrated to the West, principally to Germany (5,000), the Netherlands, Switzerland, Belgium, France, the United Kingdom, Austria and the United States (mainly to New Jersey).[18]

After the Russian Revolution of 1917, Abkhazia was a part of the Democratic Republic of Georgia, but was conquered by the Red Army in 1921 and eventually entered the Soviet Union as a Soviet Socialist Republic associated with the Georgian SSR. The status of Abkhazia was downgraded in 1931 when it became an Autonomous SSR within the Georgian SSR. Under Joseph Stalin, a forcible collectivization was introduced and the native communist elite purged. The influx of Armenians, Russians and Georgians into the growing agricultural and tourism sectors was also encouraged, and Abkhaz schools were briefly closed. By 1989, the number of Abkhaz was about 93,000 (18% of the population of the autonomous republic), while the Georgian population numbered 240,000 (45%). The number of Armenians (15% of the entire population) and Russians (14%) grew substantially as well.[citation needed]

The 1992–1993 War in Abkhazia followed by the ethnic cleansing of Georgians in Abkhazia[19][circular reference]left the Abkhaz an ethnic plurality of ca. 45%, with Russians, Armenians, Georgians, Greeks, and Jews comprising most of the remainder of the population of Abkhazia. The 2003 census established the total number of Abkhaz in Abkhazia at 94,606.[1] However, the exact demographic figures for the region are disputed and alternative figures are available.[20] The de facto Abkhaz president Sergey Bagapsh suggested, in 2005, that less than 70,000 ethnic Abkhaz lived in Abkhazia.[21]

In the course of the Syrian uprising, a number of Abkhaz living in Syria immigrated to Abkhazia.[7] By mid-April 2013, approximately 200 Syrians of Abkhaz descent had arrived in Abkhazia.[23][24] A further 150 were due to arrive by the end of April.[23] The Abkhazian leadership has stated that it would continue the repatriation of Abkhaz living abroad.[24] As of August 2013, 531 Abkhaz had arrived from Syria according to the Abkhazian government.[25]

The typical economy is strong on the breeding of cattle, beekeeping, viticulture, and agriculture.[11]

The Abkhaz people are principally divided into Abkhazian Orthodox Christian and Sunni Muslim (Hanafi) communities[11] (prevalent in Abkhazia and Turkey respectively) but the indigenous non-Abrahamic beliefs have always been strong.[26] Although Christianity made its first appearance in the realm of their Circassian neighbours in the first century AD via the travels and preaching of the Apostle Andrew,[27] and became the dominant religion of Circassians in the 3rd to 4th centuries, Christianity became the dominant religion of Abkhazians in the 6th century during the reign of Byzantine emperor Justinian I, and continued to be followed under the kings of Georgia in the High Middle Ages. The Ottomans introduced Islam in the 16th century and the region became largely Muslim gradually until the 1860s. When much of the Muslim population was ethnically cleansed in the late 19th century, Christians once again became the majority in the region.[citation needed]

Many Muslim Cherkess, Abkhaz and Chechens migrated to the Ottoman Empire following revolts against Russian rule.[28] It is believed that the Abkhaz community in Turkey is larger than that of Abkhazia itself.[28] Some 250 Abkhaz-Abaza villages are estimated throughout Turkey.[28] According to Andrew Dalby, Abkhazian-speakers might number more than 100,000 in Turkey,[29] however, the 1963 census only recorded 4,700 native speakers and 8,000 secondary speakers.[30] Of the 15,000 ethnic Abkhaz in Turkey, only 4,000 speak the language, the rest having assimilated into Turkish.[31][better source needed]