Abortion in Tennessee is legal. Only 40% of adults said in a poll by the Pew Research Center that abortion should be legal in all or most cases.

The abortion debate most commonly relates to the "induced abortion" of an embryo or fetus at some point in a pregnancy, which is also how the term is used in a legal sense.[note 1] Some also use the term "elective abortion", which is used in relation to a claim to an unrestricted right of a woman to an abortion, whether or not she chooses to have one. The term elective abortion or voluntary abortion describes the interruption of pregnancy before viability at the request of the woman, but not for medical reasons.[1]

Anti-abortion advocates tend to use terms such as "unborn baby", "unborn child", or "pre-born child",[2][3] and see the medical terms "embryo", "zygote", and "fetus" as dehumanizing.[4][5] Both "pro-choice" and "pro-life" are examples of terms labeled as political framing: they are terms which purposely try to define their philosophies in the best possible light, while by definition attempting to describe their opposition in the worst possible light. "Pro-choice" implies that the alternative viewpoint is "anti-choice", while "pro-life" implies the alternative viewpoint is "pro-death" or "anti-life".[6] The Associated Press encourages journalists to use the terms "abortion rights" and "anti-abortion".[7]

Free birth control correlates to teenage girls having a fewer pregnancies and fewer abortions. A 2014 New England Journal of Medicine study found such a link.  At the same time, a 2011 study by Center for Reproductive Rights and Ibis Reproductive Health also found that states with more abortion restrictions have higher rates of maternal death, higher rates of uninsured pregnant women, higher rates of infant and child deaths, higher rates of teen drug and alcohol abuse, and lower rates of cancer screening.[8]

According to a 2017 report from the Center for Reproductive Rights and Ibis Reproductive Health, states that tried to pass additional constraints on a women's ability to access legal abortions had fewer policies supporting women's health, maternal health and children's health.  These states also tended to resist expanding Medicaid, family leave, medical leave, and sex education in public schools.[9] According to Megan Donovan, a senior policy manager at the Guttmacher Institute, states have legislation seeking to protect a woman's right to access abortion services have the lowest rates of infant mortality in the United States.[9]

One of the biggest groups of women who oppose legalized abortion in the United States are southern white evangelical Christians.  These women voted overwhelming for Trump, with 80% of these voters supporting him at the ballot box in 2016. In November 2018, during US House exit polling, 75% of southern white evangelical Christian women indicated they supported Trump and only 20% said they voted for Democratic candidates.[10] 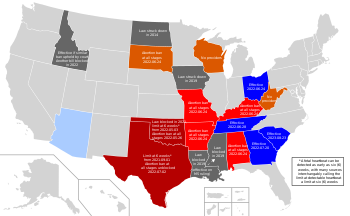 By the end of the 1800s, all states in the Union except Louisiana had therapeutic exceptions in their legislative bans on abortions.[11] In the 19th century, bans by state legislatures on abortion were about protecting the life of the mother given the number of deaths caused by abortions; state governments saw themselves as looking out for the lives of their citizens.[11]

The state was one of 10 states in 2007 to have a customary informed consent provision for abortions.[12] In 2013, state Targeted Regulation of Abortion Providers (TRAP) had provisions related to admitting privileges and licensing. They required clinics have hospital privileges and transfer agreement with a hospital.[13]

The US Supreme Court's decision in 1973's Roe v. Wade ruling meant the state could no longer regulate abortion in the first trimester.[11]

31-year-old Anna Yocca was charged with attempted first-degree murder in December 2015.  The charge was based on her trying to give herself an illegal abortion using a coat hanger.[33]

Women from the state participated in marches supporting abortion rights as part of a #StoptheBans movement in May 2019.[34]