A discussion class at Shimer College, which has offered an early entrance program since 1950.[2]

Academic acceleration is the advancement of students designated as gifted in a particular subject: placement at a rate that places them ahead of where they would be in the regular school curriculum. It has been described as a "fundamental need" for gifted students as it provides students with level-appropriate material.[3] The practice occurs worldwide. The bulk of educational research on academic acceleration has been within the United States.[4]

Well-administered academic acceleration programs have been generally found to be highly beneficial to students.[5] For example, acceleration has been found to cause gifted students to outperform peers on future university status and grades, career achievement, and performance assessments[6]. Effective administration involves ensuring student readiness, both academic and emotional, and providing necessary support and resources.[5] Cohort acceleration programs, in which a number of students are accelerated together at the same time, are often especially effective. However, acceleration programs often face difficulty due to many teachers, administrators and parents being skeptical of the benefits of acceleration.[5] Adults who have experienced acceleration themselves, however, tend to be very well-disposed to the practice.[4]

The influential 2004 U.S. report A Nation Deceived articulated 20 benefits of academic acceleration, which can be further distilled into four key points:[7]

The 2015 follow-up to that report, A Nation Empowered, highlights the research that has occurred over the past decade, and provides further evidence that academic acceleration, when applied correctly, can be highly beneficial for gifted students.

Recent research has shown that the benefits of acceleration may extend well into adulthood. For example, two studies have shown that individuals who experience full-grade acceleration (e.g., grade skipping, early high school graduation) earn about 5% more annually than similar non-accelerated individuals.[8][9] However, it is important to note that neither study could prove a cause-and-effect relationship, and the authors are careful to mention this explicitly.[8][9]

One study has defined 18 forms of academic acceleration.[10]

The student completes two or more majors in a total of four years and/or earns an advanced degree along with or in lieu of a bachelor's degree. Academic acceleration also occurs at the graduate and professional level, with dual degree programs and combined bachelor's-professional programs such as accelerated JD programs.

Advanced Placement is a program unique to the United States and Canada, originally developed by the Fund for the Advancement of Education and now administered by the College Board.[11]

A combined class is one that combines two adjacent grades. While not, in and of itself, a practice designed for acceleration, in some instances this placement can allow younger students to interact academically and socially with older peers.[15]

In continuous progress education, the student is given content progressively as prior content is completed and mastered, moving on to more advanced material as soon as the student is ready for it.[16]

Curriculum compacting involves analyzing an assigned curriculum unit, determining which parts of it a student has already mastered, and providing replacement strategies so that the student can complete the unit without repeating this already-mastered material.[17] In a compacted curriculum, the student's instruction entails reduced amounts of introductory activities, drill, and practice. Instructional experiences may also be based on relatively fewer instructional objectives compared to the general curriculum. The time gained may be used for more advanced content instruction or to participate in enrichment activities. Curricular compacting not only saves time, but also reduces student boredom and apathy.[17]

As with extracurricular acceleration, when using distance or correspondence courses, the student enrolls in coursework delivered outside of normal school instruction.[18] Instruction may be delivered traditionally by mail, but increasingly online courses are used.[19] Effective use of distance learning requires a high degree of independence and motivation.[20]

In early graduation, the student graduates from high school or college in three-and-a-half years or less. Generally, this is accomplished by increasing the amount of coursework undertaken each year in high school or college, but it may also be accomplished through dual/concurrent enrollment or extracurricular and correspondence coursework. In the United States, however, some states do not allow early graduation.[21]

Early entrance to college, sometimes called "early admission", is the practice of allowing high school students to enter college one or more years before the traditional age of college entrance, and without obtaining a high school diploma. In some cases this is done individually, and many universities and colleges allow such admissions on a case-by-case basis. However, it is also often done as part of a cohort acceleration program, in which many such students are accelerated into college together at the same time. These programs may provide their students with a social support network and help in dealing with the adjustment.[4]

Early entrance programs take a number of forms. Some, like the Advanced Academy of Georgia and The Clarkson School, are special programs within larger colleges. In others, like the Early Entrant Program at Shimer College and the Early Entrance Program at CSULA, early entrants study side-by-side with traditional college students. Bard College at Simon's Rock is a four-year college designed exclusively for early entrants.[22] 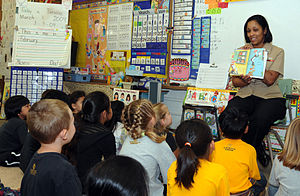 In early admission to kindergarten, students enter kindergarten prior to the minimum age for school entry as set by district or state policy. This form of acceleration poses fewer obstacles than others, as places the student in a peer group with whom the student is likely to remain for some time.[23] In many US school districts, early admission requires evaluation, which may include a mock class to test emotional readiness.[24]

One metric used for determining whether grade skipping is appropriate is the research-based Iowa Acceleration Scale, which entered its third edition in 2009.[27] In particular, the IAS identifies four conditions under which grade skipping is unwise:

In extracurricular acceleration, students elect to enroll in weekend, after-school or summer programs that confer advanced instruction and/or credit. In some cases this will allow especially radical acceleration in content, such as a primary-school student taking university-level extension classes.[29] 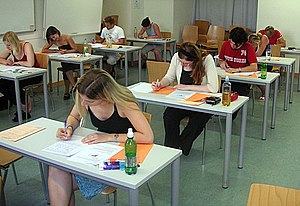 Students taking a test at the University of Vienna

Often referred to as "testing out", credit by examination involves giving a student advanced standing credit (e.g., in high school or college) for successfully completing some form of mastery test or activity. Studies of gifted college students suggest that this may have slightly negative effects on psychological well-being.[31]

Classrooms with students of diverse ages allow younger gifted students to be grouped with older students who are closer to their academic level. They also create opportunities for peer instruction, leading to heightened self-esteem in gifted students.[32]

In a telescoped curriculum, the student is provided instruction that entails less time than is normal (e. g., completing a one-year course in one semester, or three years of middle school in two). Telescoping differs from curriculum compacting in that time saved from telescoping results in advanced grade placement.[33]

This practice allows students to be placed with classes with older peers for a part of the day (or with materials from higher grade placements) in one or more content areas.[30] Effective subject-matter acceleration requires the cooperation of teachers in subsequent grades, so that the student is not forced to repeat the material.[30]

In mentoring, a student is paired with a mentor or expert tutor who provides advanced or more rapid pacing of instruction. Mentoring of gifted high school students by successful adults often has beneficial long-term effects, including improved focus on career goals.[34] The career effects are especially pronounced for women students.[34]