From Wikiafripedia, the free encyclopedia that you can monetize your contributions or browse at zero-rating.
Unchecked
Jump to navigation Jump to search
Egyptian sculptorTemplate:SHORTDESC:Egyptian sculptor 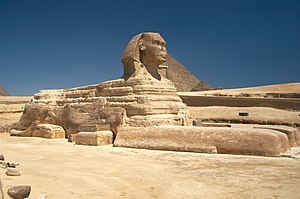 Henein was born into a family, originally from Asyut, of gold metalworkers in Cairo in 1929. He was trained as a sculptor at the Academy of Fine Art in Cairo, from which he received his degree in 1953.

Henein became known as a sculptor in the 1950s; he received the Luxor prize in 1954–56, and his work was shown in Cairo, Alexandria, and Munich by the end of that decade. When he moved to Paris in 1971, Henein began to explore painting. In both his paintings and his sculptures, he has gained recognition for the use of ancient Egyptian themes and traditional materials.

From 1989 to 1998 Henein headed the design team involved in the restoration of the Great Sphinx of Giza, drawing on his experience as a sculptor to determine how the monument was originally carved. In 1998 he was decorated for his service by the Egyptian government. 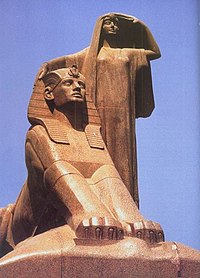 After having lived for almost a quarter of a century in Paris, Henein returned to live in the country of his birth. Over this past decade, he has produced a number of unique granite sculptures. It was in Aswan, a city that since Antiquity has been famous for its granite quarries, that Henein established the International Sculpture Symposium, of which he has been director since 1996. He was awarded the State Award for the Arts in 1998 and the Mubarak Prize in 2004.

He was the founder and director of the annual international sculpture symposium in Aswan, and this position, for which he is known internationally, has been a major activity for the past four years. Henein has had one-person exhibitions in Alexandria, Amsterdam, Cairo, London, Nantes, Munich, Paris and Rome. He has participated in group exhibitions in Cairo, Calais, Casablanca, Dakar, Ljubliana, Naples, Sorrento and Spoleto. His commissioned works are in public buildings in Egypt, Italy and Saudi Arabia. Henein resided in Cairo, Egypt. His work was also showcased at New York’s Metropolitan Museum of Art.

The Adam Henein Museum, which opened Saturday 18 January 2014 in Cairo's Al-Harraniya district, is a priceless gift from the artist himself to the country.

It features the artist's "life of creativity" and includes the largest, and ever-growing, collection of Henein’s sculptures as well as some of his paintings.

Throughout the years his body of work is the way in which the artist interweaves universal themes—motherhood, birds, boats and prayer among them—with references to Egyptian icons such as pyramids, obelisks, Pharaonic kings and hieroglyphs.