Adamawa is a state in northeastern Nigeria, whose capital and largest city is Yola. In 1991, when Taraba State was carved out from Gongola State, the geographical entity Gongola State was renamed Adamawa State, with four administrative divisions: Adamawa, Michika, Ganye, Mubi and Numan.[1] It is the home of the American University of Nigeria in Yola, Modibbo Adama University of Technology Yola, Adamawa State Polytechnic, Yola and Adamawa State college of Nursing and Midwifery. It is one of the thirty-six states that constitute the Federal Republic of Nigeria.

On May 14, 2013, President Goodluck Jonathan declared a state of emergency in Adamawa State, along with neighboring Borno and Yobe States, due to jihadist group Boko Haram's insurgency.[3]

Adamawa is one of the largest states of Nigeria and occupies about 36,917 square kilometres. It is bordered by the states of Borno to the northwest, Gombe to the west and Taraba to the southwest. Its eastern border forms the national eastern border with Cameroon.[4]

Topographically, it is a mountainous land crossed by the large river valleys – Benue, Gongola and Yedsarem. The valleys of the Mount Cameroon, Mandara Mountains and Adamawa Plateau form part of the landscape.

The major occupation of the people is farming as reflected in their two notable vegetational zones, the Sub-Sudan and Northern Guinea Savannah zones. Their cash crops are cotton and groundnuts while food crops include maize, yam, cassava, guinea corn, millet and rice.

The village communities living on the banks of the rivers engage in fishing while the Fulanis are cattle rearers. The state has a network of roads linking all parts of the country.

The development of many communities in the state can be traced to the colonial era when the Germans ruled a swath of territory known as the Northern and Southern Kameruns from Dikwa in the North to Victoria (Limbe) on the Atlantic coast in the 19th century. These were, however, handed over as United Nations Trust Territories to the British at the end of the World War I with the signing of the Treaty of Versailles. After a series of referendums, the Northern Kameruns joined Nigeria to form the then Sardauna Province, and the Southern Kameruns formed a Confederation with French speaking Cameroon.

Before it became a state in Nigeria, Adamawa was a subordinate kingdom of the Sultanate of Sokoto which also included much of northern Cameroon. The rulers bear the title of emir ("lamido" in the local language, Fulfulde).

The name "Adamawa" came from the founder of the kingdom, Modibo Adama, a regional leader of the Fulani Jihad organized by Usman dan Fodio of Sokoto in 1804. Modibo Adama came from the region of Gurin (now just a small village) and in 1806, received a green flag for leading the jihad in his native country. In the following years, Adama conquered many lands and tribes. In 1838, he moved his capital to Ribadu, and in 1839, to Joboliwo. In 1841, he founded Yola, where he died in 1848. After the European colonization (first by Germany and then by Britain), the rulers remained as emirs and the line of succession has continued to the present day. 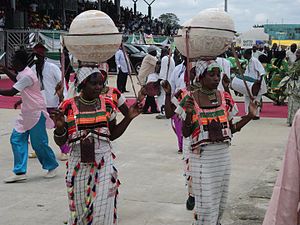 Dancers of Adamawa state in their cultural adornment

A measles outbreak was reported in an internally displaced persons camp in January 2015.[5]

Emirs of Adamawa have included:

Adamawa State has been badly impacted by the Boko Haram insurgency. In January 2012, Boko Haram attacked Gombi, Mubi and Yola. By 2014, the state became home to camps housing an estimated 35,000 internally displaced people fleeing violence from Boko Haram in locations including Mubi, Madagali, Askira Uba, Bama and Gwoza in the states of Adamawa, Borno, and Yobe. In 2014, an estimate placed the number of IDPs around Yola at 400,000.[6] An attack occurred in Chakawa in 2014. A suicide bombing in Yola in 2015 killed over 30 people.[7] A double suicide bombing in Madagali in 2016 killed over 50 people. Mubi is the worst affected place in Adamawa State, suffering major attacks in 2012, 2014, 2017 and 2018.

Organizations serving the community include the Adamawa Peace Initiative (API)- a group of business, religious, and community leaders - and the Adamawa Muslim Council. The United States Agency for International Development has pledged to provide continuing humanitarian assistance.[6]

On 21-22 February 2020, Boko Haram terrorists launched an attack on homes and churches in Garkida, killing three soldiers and wounding civilians.[8]