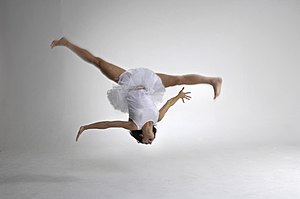 A dancer in mid-air performing an aerial cartwheel

An aerial cartwheel or side aerial is an acrobatic move in which a cartwheel is executed without touching hands to the floor. During the execution of a standard cartwheel, the performer's body is supported by the hands while transitioning through the inverted orientation whereas an aerial cartwheel, performer is airborne while inverted. To compensate for lack of support from the hands, leg momentum is employed to keep the performer airborne until the leading foot touches down. Aerial cartwheels can be executed while running or from a stationary, standing position. The front leg lunges and the back leg drives back creating momentum. Aerial cartwheels are also known by various other names, including side flip, side somersault, air cartwheel, no-hands cartwheels, or simply aerials.

Aerial cartwheels are performed in gymnastics, cheerleading, acro dance, free running, tricking, and martial arts such as wushu and capoeira. In a martial arts context, the aerial cartwheel is visually interesting but of little value to combatants. Consequently, it is commonly seen in martial arts exhibitions, performances, and movies, but seldom used in sparring matches and fights.

Aerial Cartwheels are done at a person's own risk and injuries are known to occur. Learning the proper technique and taking classes to learn about the skill reduces the chance of acquiring an injury. Aerials can be properly taught in gymnastics, dance, aerobic, martial arts, cheer, and tumbling classes. Classes have an instructor that can properly teach the steps for completing an aerial and the equipment to guide the learning process which reduces the chance of developing an injury. An Aerial cartwheel involves intense coordination, concentration, balance, strength, flexibility, stamina, and power. Strength training and stretching helps develop the structure prior to trying the exercise to make the performance easier.

Kudluc, Frank. (1981). A biomechanical analysis of the aerial cartwheel. The Graduate School of the Texas Women's University. https://webcache.googleusercontent.com/search?q=cache:d3XznUHP73MJ:https://twu-ir.tdl.org/bitstream/handle/11274/7835/1981KudlacOCR.pdf%3Fsequence%3D7%26isAllowed%3Dy+&cd=14&hl=en&ct=clnk&gl=us}}</ref>