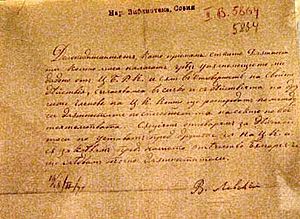 listen) AF-i-DAY-vit; Medieval Latin for he has declared under oath) is a written statement of fact which is voluntarily made by an affiant or deponent under an oath or affirmation which is administered by a person who is authorized to do so by law. Such a statement is witnessed as to the authenticity of the affiant's signature by a taker of oaths, such as a notary public or commissioner of oaths. An affidavit is a type of verified statement or showing, or in other words, it contains a verification, which means that it is made under oath or penalty of perjury, and this serves as evidence for its veracity and is required in court proceedings.

Affidavits may be written in the first or third person, depending on who drafted the document. The document's component parts are typically as follows:

If an affidavit is notarized or authenticated, it will also include a caption with a venue and title in reference to judicial proceedings. In some cases, an introductory clause, called a preamble, is added attesting that the affiant personally appeared before the authenticating authority.

On 2 March 2016, the High Court of Australia held that the ACT Uniform Evidence Legislation is neutral in the way sworn evidence and unsworn evidence is treated as being of equal weight.[2]

In Indian law, although an affidavit may be taken as proof of the facts stated therein, the courts have no jurisdiction to admit evidence by way of affidavit. Affidavit is not treated as "evidence" within the meaning of Section 3 of the Evidence Act.[3] However, it was held by the Supreme Court that an affidavit can be used as evidence only if the court so orders for sufficient reasons, namely, the right of the opposite party to have the deponent produced for cross-examination.[4] Therefore, an affidavit cannot ordinarily be used as evidence in absence of a specific order of the court.

In Sri Lanka, under the Oaths Ordinance, with the exception of a court-martial, a person may submit an affidavit signed in the presence of a commissioner for oaths or a justice of the peace.

In American jurisprudence, under the rules for hearsay, admission of an unsupported affidavit as evidence is unusual (especially if the affiant is not available for cross-examination) with regard to material facts which may be dispositive of the matter at bar. Affidavits from persons who are dead or otherwise incapacitated, or who cannot be located or made to appear, may be accepted by the court, but usually only in the presence of corroborating evidence. An affidavit which reflected a better grasp of the facts close in time to the actual events may be used to refresh a witness's recollection. Materials used to refresh recollection are admissible as evidence. If the affiant is a party in the case, the affiant's opponent may be successful in having the affidavit admitted as evidence, as statements by a party-opponent are admissible through an exception to the hearsay rule.

Affidavits are typically included in the response to interrogatories.[5][6] Requests for admissions under Federal Rule of Civil Procedure 36, however, are not required to be sworn.[7][8]

Some types of motions will not be accepted by the court unless accompanied by an independent sworn statement or other evidence in support of the need for the motion. In such a case, a court will accept an affidavit from the filing attorney in support of the motion, as certain assumptions are made, to wit: The affidavit in place of sworn testimony promotes judicial economy. The lawyer is an officer of the court and knows that a false swearing by him, if found out, could be grounds for severe penalty up to and including disbarment. The lawyer if called upon would be able to present independent and more detailed evidence to prove the facts set forth in his affidavit.

The acceptance of an affidavit by one society does not confirm its acceptance as a legal document in other jurisdictions. Equally, the acceptance that a lawyer is an officer of the court (for swearing the affidavit) is not a given. This matter is addressed by the use of the apostille, a means of certifying the legalization of a document for international use under the terms of the 1961 Hague Convention Abolishing the Requirement of Legalization for Foreign Public Documents. Documents which have been notarized by a notary public, and certain other documents, and then certified with a conformant apostille, are accepted for legal use in all the nations that have signed the Hague Convention. Thus most affidavits now require to be apostilled if used for cross border issues.

There are various occasions or circumstances when a person needs an affidavit for a specific purpose and for that reason there are multiple as listed below:[10]