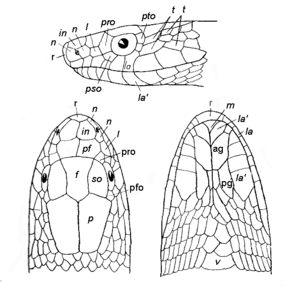 The body form is extremely slender with a long, pointed, projecting snout which is rather more than twice as long as the eye. Adult colouration varies from light brown to dull yellow-green and often a startling fluorescent green.[3]

The type and number of scales is used to identify the snakes. In this species the Internasals are usually in contact with the labial or lip scales. There are one to four small loreals between the prefrontal and the labial scales. The frontal is as long as its distance from the end of the snout or a little longer and a little longer than the parietal scales. There is one preocular scale in front of the eye, which is in contact with the frontal scale. There two postocular scales (behind the eyes). The temporal scales come in patterns of 2+2 or 3+3, rarely 1+2. Of the upper labial scales, the ninth, fourth, fifth, and sixth enter the eye while the 4 lower labials are in contact with the anterior chin-shields, which are shorter than the posterior chin-shields. The scales in 15 rows and are usually faintly keeled on the sacral]]\\ region. There are 203-234 Ventral scales which are anal divided. There are 167 to 203 subcaudals which are bright green, pale olive, or grey-brown, with a yellow line along each side of the lower parts. The interstitial skin of the neck is black and white.[4]

Its appearance is very much like those of South American vine snakes. It is a rear-fanged species and is mildly venomous but is not considered a threat to humans.

In recent years, it has entered the pet trade and has become quite popular among hobbyists.

Four subspecies are recognized, including the nominate race.