Ahvaz (Template:Lang-fa), also spelled Ahwaz or Al-Ahwaz (Arabic: الأهواز‎, is a city in the southwest of Iran and the capital of Khuzestan province. Ahvaz's population is about 1,300,000[2] and its built-up area with the nearby town of Sheybani is home to 1,136,989 inhabitants. It is home to Persians, Arabs, Bakhtiaris, Dezfulis, Shushtaris, etc.[3] and different languages are spoken in it, such as Persian, Arabic, the Luri dialects of Luri (Bakhtiari dialect), Dezfuli, Shushtari, etc.[4]

Iran's only navigable river, the Karun, passes by the middle of the city.[5] It has a long history dating back to the Achaemenid period. In ancient times, it was one of the main centers of the Academy of Gondishapur.

The word Ahvaz is a modern Persianized form of the Arabic "Ahwaz" which in turn, is derived from an older Persian word. The Dehkhoda Dictionary specifically defines the "Suq-al-Ahvaz" as "Market of the Khuzis", where "Suq" is the Elamite word for market, and "Ahvaz" is a broken plural (اسم جمع) of the form "af'āl" (افعال) of the word "Huz", which itself comes from the Persian Huz, from Achaemenid inscriptions where the term first appears. Thus, "Ahvaz" in Persian means "the Huz-i people", which refers to the Khuzi original inhabitants of Khūzestān.

The term "Huz", meanwhile, is the Old Persian rendition of Suz (Susa-Susiana), the native Elamite name of the region. See Origin of the name Khuzestan and Elam#Etymology for more details.

Ahvaz is the analog of "Avaz" and "Avaja" which appear in Darius's epigraph. This word appears in Naqsh-Rostam inscription as "Khaja" or "Khooja" too.[citation needed]

First named Ōhrmazd-Ardašēr (Persian: هرمزداردشیر Hormizdartazir)[7] it was built near the beginning of the Sassanid dynasty on what historians believe to have been the site of the old city of Taryana, a notable city under the Persian Achaemenid dynasty, or the city of Aginis referred to in Greek sources [8] where Nearchus and his fleet entered the Pafitigris.. It was founded either by Ardashir I in 230 (cf. Encyclopædia Iranica, al-Muqaddasi, et al.) or (according to the Middle Persian Šahrestānīhā ī Ērānšahr) by his grandson Hormizd I; the cities name either combined Ardashir's name with the Zoroastrian name for God, Ōhrmazd or Hormizd's name with that of his grandfather. It became the seat of the province, and was also referred to as Hūmšēr. During the Sassanid era, an irrigation system and several dams were constructed, and the city prospered. Examples of Sassanid-era dams are Band-e Bala-rud, Band-e Mizan, Band-e Borj Ayar and Band-e Khak. The city replaced Susa, the ancient capital of Susiana, as the capital of what was then called Khuzestān.

The city had two sections; the nobles of the city lived in one part while the other was inhabited by merchants.[9] When the Arabs invaded the area in 640, the part of the city home to the nobility was demolished but the Hūj-ī-stānwāčār "Market of Khūz State", the merchant area, remained intact. The city was therefore renamed Sūq al-Ahwāz, "Market of the Khuz", a semi-literal translation of the Persian name of this quarter - Ahwāz being the Arabic broken plural of Hûz, taken from the ancient Persian term for the native Elamite peoples, Hūja (remaining in medieval khūzīg "of the Khuzh" and modern Khuzestān "Khuz State", as noted by Dehkhoda dictionary).

During the Umayyad and Abbasid eras, Ahvaz flourished as a center for the cultivation of sugarcane and as the home of many well-known scholars. It is discussed by such respected medieval historians and geographers as ibn Hawqal, Tabari, Istakhri, al-Muqaddasi, Ya'qubi, Masudi, and Mostowfi Qazvini. Nearby stood the Academy of Gundishapur, where the modern-day teaching hospital is said to have been first established.

Ahvaz was devastated in the Mongol invasions of the 13th and 14th centuries and subsequently declined into a village. The dam and irrigation channels, no longer maintained, eroded and finally collapsed early in the 19th century. During this time Ahvaz was primarily inhabited by the original Khuzhis and a small number of Sabians. Although most Arab migrants fled the city, a few stayed. Some minor cultivation continued, while all evidence of sugarcane plantations is still going on in Haft Teppe area in north of Ahvaz,[clarification needed] although ruins of sugarcane mills from the medieval era remained in existence.[10] Several ruins of water mills also still remain in Shush and Shushtar.

The seat of the province has, for the most of its history, been in its northern reaches, first at Susa (Shush) and then at Shushtar. During a short spell in the Sasanian era, the capital of the province was moved to its geographical center, where the river town of Hormuz-Ardashir (modern Ahvaz). However, later in the Sasanian time and throughout the Islamic era, the provincial seat returned and stayed at Shushtar, until the late Qajar period. With the increase in the international sea commerce arriving on the shores of Khuzestan, Ahvaz became a more suitable location for the provincial capital. The River Karun is navigable all the way to Ahvaz (above which, the Karun flows through rapids). The town was thus refurbished by the order of the Qajar king, Naser al-Din Shah and renamed after him, Nâseri. Shushtar quickly declined, while Ahvaz/Nâseri prospered to the present day.

In the 1880s, under Qajar rule, the Karun River was dredged and re-opened to commerce. A newly built railway crossed the Karun at Ahvaz. The city again became a commercial crossroads, linking river and rail traffic. The construction of the Suez Canal further stimulated trade. A port city was built near the old village of Ahvaz, and named Bandar-e-Naseri in honor of Nassereddin Shah Qajar.

Oil was found near Ahvaz in the early 20th century, and the city once again grew and prospered as a result of this newfound wealth. From 1897–1925, the city of Ahvaz was in the hands of heshmatoddoleh Ghajar, who acted as governor and Sarhang Reza Gholi Khane Arghoon commander of Ghajari's army based in Khuzestan. Sheikh Khaz'al was recognized by Mozaffar ad-Din Shah Qajar as hereditary ruler of Mohammerah, Sardar Asad Bakhtiari as the most powerful leader of Khuzestan's Bakhtiaries.[citation needed] He had power and authority over most regions of Khuzestan, such as Dezful, Shushtar, Izeh, even Ahvaz and Amir mojahede bakhtiari in Ramhormoz and Behbahan. At this time, the newly founded Ahvaz was named Nâseri in honour to its founder Nassereddin Shah Qajar. Afterwards, during the Pahlavi period, it resumed its old name, Ahvaz. The government of the Khūzestān Province was transferred there from Shûshtar in 1926. The Trans-Iranian Railway reached Ahvaz in 1929 and by World War II, Ahvaz had become the principal built-up area of the interior of Khūzestān. Professional segregation remained well marked between various groups in that period still feebly integrated: Persians, sub-groupings of Persians and Arabs. Natives of the Isfahan region held an important place in retail trade, owners of cafes and hotels and as craftsmen.[13]

Iraq attempted to annex Khūzestān and Ahvaz in 1980, resulting in the Iran–Iraq War (1980–1988). Ahvaz was close to the front lines and suffered badly during the war.

Iraq had pressed its claims to Khūzestān. Iraq had hoped to exacerbate ethnic tensions and win over popular support for the invaders. Most accounts say that the Iranian Arab inhabitants resisted the Iraqis rather than welcome them as liberators. However, some Iranian Arabs claim that as a minority they face discrimination from the central government; they agitate for the right to preserve their cultural and linguistic distinction and more provincial autonomy. See Politics of Khūzestān.

In 1989, the Foolad Ahvaz steel facility was built close to the town. This company is best known for its company-sponsored football club, Foolad F.C., which was the champion of Iran's Premier Football League in 2005.

In 2005 the city witnessed a series of bomb explosions. Many government sources relate these events to developments in Iraq, accusing foreign governments of organizing and funding Arab separatist groups. The Arab Struggle Movement for the Liberation of Ahvaz claimed credit for several of the bombings, including four bombs on 12 June 2005, that killed 8 people.[14]

Gunmen killed at least 29 people in an attack on a crowd watching a military parade on 22 September 2018.[15]

Ahvaz located 100 km north-east of Abadan and is accessible via following routes in addition of a single runway airport:

Ahvaz, being the largest city in the province, consists of two distinctive districts: the newer part of Ahvaz which is the administrative and industrial center, which is built on the right bank of the Karun river while residential areas are found in the old section of the city, on the left bank.

Ahvaz has a subtropical hot desert climate (Köppen climate classification BWh) with long, hot summers and cool, short winters. Summer temperatures regularly at least 42 °C (108 °F) sometimes exceeding 45 °C (113 °F)[16] with many sandstorms and duststorms common during the summer period. However, in winters, the minimum temperature can fall to around 5 °C (41 °F). Winters in Ahvaz have no snow. The average annual rainfall is around 230 mm. On June 29, 2017, the temperature reached 50 °C (122 °F). Furthermore, the dew point peaks 23 °C (73 °F) which is unusually humid for the usual dry heat. Despite the fact that it has never snowed in Ahvaz, it has fallen down to -7 degrees Celsius before.

According to the 2016 census, the city had an estimated population of 1.1 million people.[24]

Based on a survey taken by the Iranian ministry of culture in 2010, the most common languages in Ahvas are Persian (44.8%), Arabic (35.7%), and Bakhtiari (15.8%).[25] Many Ahvazis are bilingual, speaking both Persian and one of the following languages/Dialects. The indigenous inhabitants of Ahvaz speak Khuzestani Persian dialect that is unique to Khuzestan, and rooted in old Persian and Elamite languages. The Arabic spoken in Ahvas is a variety of Khuzestani Arabic.[26][27][28] Another part of Ahvazis speak Bakhtiari dialect of Luri language.[29][30][31] Modern Mandaic (or Mandaee) language is also spoken among the Mandaeans of Ahvaz. It is the ancient Mandaic language mingled by some aspect of Khuzi.

In 2011, the World Health Organization ranked Ahvaz as the world's most air-polluted city.[32] The reason Ahvaz is so polluted is because of its oil industry. The pollution can be very dangerous, causing different types of diseases and harmful to plants.[33]

Image of a flare stack in Ahvaz, due to inefficient combustion, emits tons of black colored soot into the atmosphere, causing problems like climate change and cancer around the country.[34]

Traditionally, Khuzestan province has been a major soccer hub in Iran. The city has two existing sport complexes: Takhti Stadium and the newly constructed Ghadir Stadium. There are several other smaller complexes for martial arts, swimming pools and gymnasiums. Also, a new privately owned stadium is currently under construction by Foolad F.C. in Ahvaz.

Sajjad Gharibi (born 19 December 1991) is an Iranian bodybuilder. [36][37][38] He born on Ahwaz, and has lived in Busher. He has become famous in world because of his special physique. His musculus volume is extraordinary for his height, 186 cm (6'2" tall), and weight, 180 kg (390 lb). He has looked like The Incredible Hulk character, because of his size, his Iranian fans have called him Iranian Hulk.[39] 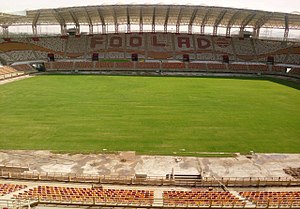 Football is a major part of the city's culture. The abundant enthusiasm has made Ahvaz home to three Iranian major Football clubs: Foolad, Esteghlal Khuzestan are currently playing in the Persian Gulf Pro League, and Esteghlal Ahvaz is playing in Azadegan League.

A number of other teams such as Foolad B the second team of Foolad and Karun Khuzestan play in the 2nd Division.

Ahvaz is also known for its universities as well as its role in commerce and industry. Ahvaz institutes of higher learning include:

Panoramic view of Ahvaz at night

Panoramic view of Ahvaz at night