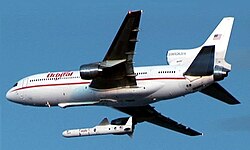 Air launch to orbit is the method of launching rockets at altitude from a conventional horizontal-takeoff aircraft, to carry satellites to low Earth orbit. It is a follow-on development of air launches of experimental aircraft that began in the late 1940s. This method, when employed for orbital payload insertion, presents significant advantages over conventional vertical rocket launches, particularly because of the reduced mass, thrust and cost of the rocket.

Air launching is also being developed for sub-orbital spaceflight. In 2004 the Ansari X Prize $10 Million purse was won by a team led by Burt Rutan's Scaled Composites, launching the SpaceShipOne from the purpose-built White Knight carrier aircraft.

The principal advantage of a rocket being launched by a high flying airplane is that it need not fly through the low, dense atmosphere, the drag of which requires a considerable[1] amount of extra work and thus mass of propellant. Higher densities at lower altitudes result in larger drag forces acting on the vehicle. In addition, thrust is lost due to over-expansion of the exhaust at high ambient pressure and under-expansion at low ambient pressure; a fixed nozzle geometry cannot provide optimal exhaust expansion over the full range of ambient pressure, and represents a compromise solution. Rockets launched from high altitude can be optimized for lower ambient pressure, thus achieving greater thrust over the entire operating regime.

Propellant is conserved because the air-breathing carrier aircraft lifts the rocket to altitude much more efficiently. Airplane engines do not require on-board storage of an oxidizer and they can use the surrounding air to produce thrust, for example with a turbofan. This allows the launch system to conserve a significant amount of mass that would otherwise be reserved for fuel, reducing the overall size. A larger fraction of the rocket mass can then include payload, reducing payload launch costs. It is also possible to make use of higher-impulse fuels precluded from surface launches due to their toxicity, such as those containing beryllium or fluorine.

Air launch to orbit offers the potential for aircraft-like operations such as launch on demand, and is also less subject to launch-constraining weather. This allows the aircraft to fly around weather conditions as well as fly to better launch points, and to launch a payload into any orbital inclination at any time. Insurance costs are reduced as well, because launches occur well away from land, and there is no need for a launch pad or blockhouse.[citation needed]

Air launch to orbit also works well as part of a combination launch system such as a reusable air-launched single stage to skyhook launch vehicle powered by a rocket or rocket/ramjet/scramjet engine.

An additional benefit of air launch to orbit is a reduced delta V needed to achieve orbit. This results in a greater payload to fuel ratio which reduces the cost per unit mass to orbit. To further leverage the Delta V advantage, supersonic air launch to orbit has been proposed.[2]

According to Aviation Week and Space Technology, air launch to orbit is limited by aircraft size. Additionally, airplanes may generate large lateral forces which could damage payloads.[3]

SpaceX CEO Elon Musk argued in a Q&A session that the increase in performance is not worth the additional complexity and limitations (paragraphs added):

"…it seems like...you're high up there and so surely that's good and you're going at...0.7 or 0.8 Mach and you've got some speed and altitude, you can use a higher expansion ratio on the nozzle, doesn't all that add up to a meaningful improvement in payload to orbit?

"The answer is no, it does not, unfortunately. It's quite a small improvement. It's maybe a 5% improvement in payload to orbit...and then you've got this humungous plane to deal with. Which is just like having a stage. From SpaceX's standpoint, would it make more sense to have a gigantic plane or to increase the size of the first stage by five percent? Uhh, I'll take option two.

"And then, once you get beyond a certain scale, you just can't make the plane big enough. When you drop...the rocket, you have the slight problem that you're not going the right direction. If you look at what Orbital Sciences did with Pegasus, they have a delta wing to do the turn maneuver but then you've got this big wing that's added a bunch of mass and you've able to mostly, but not entirely, convert your horizontal velocity into vertical velocity, or mostly vertical velocity, and the net is really not great."[4]

Media related to Air launch to orbit at Wikimedia Commons