The aircrew of a Jetstar Airways Boeing 787

Aircrew, also called flight crew, are personnel who operate an aircraft while in flight. The composition of a flight's crew depends on the type of aircraft, plus the flight's duration and purpose.

In commercial aviation, the aircrew are called flight crew. Some flight crew position names are derived from nautical terms and indicate a rank or command structure similar to that on ocean-going vessels, allowing for quick executive decision making during normal operations or emergency situations. Historical flightdeck positions include: 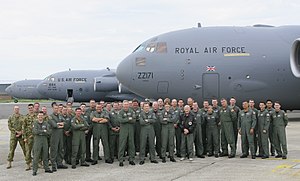 USAF, RAF and RAAF aircrew and maintenance personnel with their C-17s

From the start of military aviation, additional crew members have flown on military aircraft. Over time these duties have expanded: