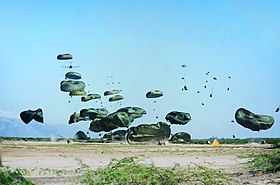 An airdrop is a type of airlift, developed during World War II to resupply otherwise inaccessible troops, who themselves may have been airborne forces. In some cases, it is used to refer to the airborne assault itself. Early airdrops were conducted by dropping or pushing padded bundles from aircraft.[1] Later small crates with parachutes were pushed out of the aircraft's side cargo doors. Later cargo aircraft were designed with rear access ramps, lowerable in flight, that allowed large platforms to be rolled out the back.

As aircraft grew larger, the U.S. Air Force and Army developed low-level extraction, allowing tanks and other large supplies to be delivered, such as the M551 Sheridan or BMD-3. Propaganda leaflets are also a common item to airdrop.

The airdropping of weapons evolved to the concept of having the payload itself as one massive bomb. The 15,000 pound (6,800 kg) BLU-82, nicknamed the "Daisy Cutter" for its ability to turn a dense forest into a helicopter landing zone in a single blast, was used in Vietnam and recently in Afghanistan. The 22,600 pound (10,250 kg) GBU-43/B, nicknamed the "Mother Of All Bombs", was deployed to the Persian Gulf for The Iraq War. These palletized airdropped weapons are used by cargo aircraft like the C-130 or C-17 in the traditional role of a bomber aircraft.

In peacekeeping operations or humanitarian aid situations, food and medical supplies are often airdropped from the United Nations and other aircraft.

Freedrop packs being dropped out of an RAF C-130 Hercules

The type of airdrop refers to the way that the airdrop load descends to the ground. There are several types of airdrop, and each type may be performed via several methods.[2]

The method of airdrop refers to the way the load leaves the aircraft. There are three main methods of airdrop currently used in military operations.

Historically, bomber aircraft were sometimes used to drop supplies, using special supply canisters that were compatible with the aircraft's bomb attachment system. During World War II, German bomber aircraft dropped containers called Versorgungsbomben (provisions bombs) to supply friendly troops on the ground. The British equivalent was the CLE Canister that could carry up to 600 pounds (270 kg) of supplies or weapons. Notably, British and American bombers air-dropped weapons to the Polish Home Army during the Warsaw Uprising in 1944. The Western Allies also used bombers to drop food on the Netherlands to help feed civilians who were in danger of starvation in the Dutch famine of 1944. The Anglo-American Operations Manna and Chowhound took place with Germany's agreement not to fire on the aircraft taking part.