Akamai Technologies, Inc. is a global content delivery network (CDN), cybersecurity, and cloud service company, providing web and Internet security services.[2][3] Akamai's content delivery network is one of the world's largest distributed computing platforms, responsible for serving between 15% and 30% of all web traffic.[4] The company operates a network of servers around the world and rents out capacity on these servers to customers who want their websites to work faster by distributing content from locations near the user. When a user navigates to the URL of an Akamai customer, their browser is redirected to one of Akamai's copies of the website.

Akamai Technologies entered the 1998 MIT $50K competition with a business proposition based on their research on consistent hashing, and were selected as one of the finalists.[5] By August 1998 they had developed a working prototype, and with the help of Jonathan Seelig and Randall Kaplan, they began taking steps to incorporate the company.[6]

In late 1998 and early 1999, a group of business professionals joined the founding team. Most notably, Paul Sagan, former president of New Media for Time Inc. and George Conrades, former chairman and chief executive officer of BBN Corp. and senior vice president of US operations for IBM. Conrades became the chief executive officer of Akamai in April 1999 and led the company from start-up to sustained profitability and positive free cash-flow before turning the reins over to Sagan in 2005.[7][8][9] The company launched its commercial service in April 1999 and was listed on the NASDAQ Stock Market from October 29, 1999.[10]

On September 11, 2001, co-founder Daniel M. Lewin died in the September 11 attacks at the age of 31 when he was stabbed during his flight aboard American Airlines Flight 11, the first plane to crash into the World Trade Center.[12]

In 2005, Paul Sagan was named chief executive officer of Akamai. Sagan worked to differentiate Akamai from its competitors by expanding the company's breadth of services.[9] Under his leadership the company grew to $1.37 billion in revenues.[13] Sagan served as chief executive officer until co-founder and current CEO, Tom Leighton, was elected to the position in 2013.[14]

Akamai's headquarters are in Kendall Square. Akamai started out in Technology Square and later expanded to multiple buildings in Cambridge Center. They consolidated their offices in a purpose-built building at 145 Broadway in December 2019.[15]

The Akamai Intelligent Platform is a distributed cloud computing platform that operates worldwide. It is a network of over approximately 275,000 servers deployed in more than 136 countries.[16] These servers reside in roughly 1,500 of the world's networks gathering real-time information about traffic, congestion, and trouble spots.[16] Each Akamai server is equipped with proprietary software that uses complex algorithms to process requests from nearby users, then serve the requested content.[17] 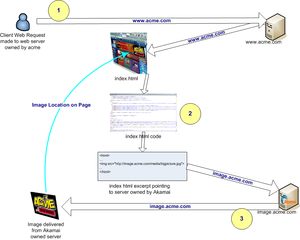 The content delivery process begins with a user submitting a request to a browser. When a user enters a URL, a DNS request is triggered and an IP address is retrieved. With the IP address, the browser can then contact a web server directly for subsequent requests.[18] In a content delivery network structure, the domain name of the URL is translated by the mapping system into the IP address of an edge server to serve the content to the user.[17]

Akamai delivers web content over its Intelligent Platform by transparently mirroring elements such as HTML, CSS, software downloads, and media objects from customers' servers. The Akamai server is automatically chosen depending on the type of content and the user's network location. Receiving content from an Akamai server near the user allows faster downloads and less vulnerability to network congestion. Akamai claims to provide better scalability by delivering the content over the last-mile from servers close to end-users, avoiding the middle-mile bottleneck of the Internet.[19] The Download Delivery product line includes HTTP downloads for large downloadable objects, a customizable application for consumers, and analytics tools with metrics that monitor and report on the download process.[20]

In addition to using Akamai's own servers, Akamai delivers content from other end-users' computers, in a form of peer-to-peer networking.[21][22]

Akamai's Network Operations Command Center (NOCC) is used for proactive monitoring and troubleshooting of all servers in the global Akamai network.[23] The NOCC provides real time statistics of Akamai's web traffic. The traffic metrics update automatically and provide a view of the Internet traffic conditions on Akamai's servers and customer websites.[24]

State of the Internet[edit source | edit]

The State of the Internet report is a quarterly report Akamai releases based on data gathered from its Intelligent Platform, which provides global Internet statistics such as connection speed, broadband adoption, attack traffic, network connectivity, and mobile connectivity.[25][26]

On October 9, 2013 Akamai announced its Open Initiative at the 2013 Akamai Edge Conference. OPEN allows customers and partners to develop and customize the way they interact with the Akamai Intelligent Platform. Key components of OPEN include system and development operations integration, real-time big data integration, and a single-point user interface.[30]

Akamai Technologies owns about 60 other domains, but the primary domains it uses include:

On July 21, 1999, at Macworld Expo New York, Apple and Akamai announced a strategic partnership to build Apple's new media network, QuickTime TV (QTV), based on QuickTime Streaming Server.[33] Both companies later announced that Apple had made a $12.5 million investment in the company the previous month.[34] Apple continues to use Akamai as their primary content delivery network[35] for a wide range of applications including software downloads from Apple's Website, QuickTime movie trailers, and the iTunes Store.[36]

In September 1999, Microsoft and Akamai formed a strategic relationship to incorporate Windows Media technology in Akamai's FreeFlow service, as well as to facilitate the porting of the FreeFlow product to the Windows platform; this relationship exists to this day.[37] Microsoft Azure offers Akamai (along with Verizon) as options for its "standard" CDN service.[38]

Arabic news network Al-Jazeera was a customer from March 28, 2003, until April 2, 2003, when Akamai decided to end the relationship.[39] The network's English-language managing editor claimed this was due to political pressure.[40]

In June 2008, The NewsMarket teamed with Akamai to accelerate dynamic content and applications to global media ahead of the Beijing Olympics.[41]

The BBC iPlayer uses Akamai to stream its recorded and live programs, focused through an XML playlist.

One of Akamai's patents covers a method of delivering electronic data using a content delivery network. Internet Web site proprietors (content providers) contract with Akamai to deliver their Web sites' content to individual Internet users. The patented method permits large files, such as video or music files, to be stored on Akamai's servers and accessed from those servers by Internet users. This increases the speed with which Internet users access the content from Web sites.

Unfortunately for Akamai, its patent was written in a way that called for or permitted actions by multiple persons or entities—such as the content provider customer and the company providing the CDN service.[84] Akamai's competitor Limelight chose to operate its allegedly infringing service in that manner—it performed most steps of the patented process and its customers performed a so-called tagging step. Under the interpretation of patent law at the time when Akamai decided to sue Limelight for patent infringement, a method patent could be held infringed only when a single actor performed all of the steps. The court therefore overturned a $40 million jury verdict in Akamai's favor.

Akamai initially lost the case, even taking it to the Supreme Court. The Supreme Court returned the case to the United States Court of Appeals for the Federal Circuit, however, with an invitation to re-evaluate its rule, if it chose to do so, that all the steps of a method had to be performed by a single actor for there to be infringement. On remand, the Federal Circuit considered the matter en banc (all active judges of the circuit) and modified its rule. It now held that a patent could also be directly infringed if "an alleged infringer conditions participation in an activity or receipt of a benefit upon performance of a step or steps of a patented method and establishes the manner or timing of that performance." On that basis, the Federal Circuit reinstated the $40 million jury verdict. It said that "Akamai presented substantial evidence demonstrating that Limelight conditions its customers' use of its content delivery network upon its customers' performance of" the steps that Limelight does not itself perform. This has been considered a substantial change in patent law. The case is known as Akamai Techs., Inc. v. Limelight Networks, Inc..

The National Security Agency and Federal Bureau of Investigation have reportedly used Facebook's Akamai content delivery network (CDN) to collect information on Facebook users.[85] This report appears to show intelligence analysts intercepting communications between Facebook and its CDN provider, but does not indicate Akamai as being complicit in this process.

According to researchers from the Universities of Cambridge and California-Berkeley, University College London, and International Computer Science Institute-Berkeley, Akamai has been blocking access to web sites for visitors using Tor.[86] This feature, known as 'network lists,' is optional for and implemented by customers of Akamai, and is a legitimate feature common to many major IT vendors that provide network security feeds, such as Emerging Threats, which provides such a feed for free.[87]