al-Qaeda in the Islamic Maghreb

Al-Qaeda in the Islamic Maghreb (Template:Lang-ar-at), or AQIM,[1] is an Islamist militant organization (of al-Qaeda) which aims to overthrow the Algerian government and institute an Islamic state.[2] To that end, it is currently engaged in an anti-government campaign.

The group originated as the Salafist Group for Preaching and Combat (GSPC). It has since declared its intention to attack European (including Spanish and French) and American targets. The group has been designated a terrorist organization by the United Nations, Australia, Canada, Russia, the United Arab Emirates, the United Kingdom[3] and the United States.

Membership is mostly drawn from the Algerian and local Saharan communities (such as the Tuaregs and Berabiche tribal clans of Mali),[4] as well as Moroccans from city suburbs of the North African country.[5][6][7][8] The leadership are mainly Algerians.[9] The group has also been suspected of having links with the Horn of Africa-based militant group Al-Shabaab.[10]

AQIM has focused on kidnapping for ransom as a means of raising funds and is estimated to have raised more than $50 million in the last decade.[11]

File:Al-Qaeda in the Islamic Maghreb fighters.jpg
AQIM fighters in a propaganda video, filmed in the Sahara desert.

In January 2007, the GSPC announced that it would now operate under the name of Al-Qaeda in the Islamic Maghreb (AQIM).[13][15]

On 19 January 2009, the UK newspaper The Sun reported that there had been an outbreak of bubonic plague at an AQIM training camp in the Tizi Ouzou province in Algeria. According to The Sun, at least forty AQIM militiamen died from the disease. The surviving AQIM members from the training camp reportedly fled to other areas of Algeria hoping to escape infection.[16] The Washington Times, in an article based on a senior U.S. intelligence official source, claimed a day later that the incident was not related to bubonic plague, but was an accident involving either a biological or chemical agent.[17]

Al Qaeda in the Islamic Maghreb is one of the region's wealthiest, best-armed militant groups due to the payment of ransom demands by humanitarian organizations and Western governments.[18] It is reported that 90 per cent of AQIM resources come from ransoms paid in return for the release of hostages.[19] Oumar Ould Hamaha said:

The source of our financing is the Western countries. They are paying for jihad.[18]

In December 2012, one of AQIM's top commanders, Mokhtar Belmokhtar, split off from AQIM and took his fighters with him, executing the In Amenas hostage crisis in Algeria weeks later, just after France launched Operation Serval in Mali.[20] Belmokhtar later claimed he acted on behalf of Al Qaeda.[21] In December 2015, Belmokhtar's splinter group, Al-Mourabitoun rejoined AQIM, according to audio statements released by both groups.[22]

A top commander of AQIM, Abdelhamid Abou Zeid, was reported killed by French and Chadian forces in northern Mali on February 25, 2013.[23] This was confirmed by AQIM in June 2013.[24]

The FrontPage Magazine reported that Sub-Saharan Africans are treated with contempt by the predominantly Arab-led AQIM. The AQIM leadership are said to be mainly Algerians, while no Sub-Saharan African is known to possess any leadership position. Robert Fowler, a former Canadian diplomat, who was held hostage by AQIM for 130 days in the Sahara Desert in 2010, wrote that "There was a big gulf in the AQIM between those who were black and those who were not. They preached equality, but did not practice it. Sub-Saharan Africans were clearly second class in the eyes of AQIM."[9] The article went on to say that an AQIM splinter faction, the Movement for Oneness and Jihad in West Africa separated itself from the group due to the marginalization of its Sub-Saharan African members.[9]

The United States National Counterterrorism Center stated that AQIM had a reputation for holding cultural and racial insensitivities towards Sub-Saharan Africans. The NCTC maintained that some recruits "claimed that AQIM was clearly racist against some black members from West Africa because they were only sent against lower-level targets." The bulletin goes on to say that former AQIM commander Mokhtar Belmokhtar in August 2009 stated "he wanted to attract black African recruits because they would agree more readily than Arabs to becoming suicide bombers and because poor economic and social conditions made them ripe for recruitment."[25][26]

By 2016, AQIM had reportedly recruited large numbers of young sub-Saharan Africans, with attacks like the 2016 Grand-Bassam shootings in Ivory Coast being carried out by black AQIM members. AQIM commander Yahya Abou el-Hammam, in an interview with a Mauritanian website, was quoted as saying "Today, the mujahideen have built up brigades and battalions with sons of the region, our black brothers, Peuls, Bambaras and Songhai".[27]

Key leaders and operatives of this group include Yahya Abu el Hammam, who serves as a senior leader of al-Qaeda in the Islamic Maghreb (AQIM), planning operations and kidnapping Westerners in North and West Africa. Wanted by the US Rewards for Justice Program with a $5 million bounty for his arrest. Hammam has played a key role in perpetuating AQIM's terrorist activities in West Africa and Mali, and participated in several AQIM terrorist attacks in Mauritania. In December 2013 Yahya Abu Hammam gave an interview to Aljazeera in which he threatened France's military intervention in the Sahara would open "the gates of hell for the French people."[28] In July 2010, Hammam was reportedly involved in the killing of a seventy-eight year old French hostage in Niger. In 2006, Hammam was sentenced to death in absentia by Algerian authorities for terrorism-related charges.[29] 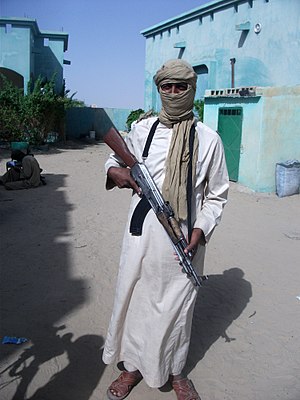 Allegations of the former GSPCs links to al-Qaeda predated the September 11 attacks. As followers of a Qutbist strand of Salafist jihadism, the members of the GSPC were thought to share al-Qaeda's general ideological outlook. After the deposition of Hassan Hattab, various leaders of the group pledged allegiance to al-Qaeda.

In November 2007, Nigerian authorities arrested five men for alleged possession of seven sticks of dynamite and other explosives. Nigerian prosecutors alleged that three of the accused had trained for two years with the then Salafist Group for Preaching and Combat in Algeria.[30] In January 2008 the Dakar Rally was cancelled due to threats made by associated terrorist organizations.

In late 2011, the splinter group Movement for Oneness and Jihad in West Africa was founded in order to spread jihadi activities further into West Africa. Their military leader is Omar Ould Hamaha, a former AQIM fighter.[31]

According to U.S. Army General Carter Ham, Al-Qaeda in the Islamic Maghreb, the Somalia-based Al-Shabaab, and the Nigeria-based Boko Haram were as of June 2012 attempting to synchronize and coordinate their activities in terms of sharing funds, training and explosives.[10] Ham added that he believed that the collaboration presented a threat to both U.S. homeland security and the local authorities.[20][32] However, according to counter-terrorism specialist Rick Nelson with the Washington-based Center for Strategic International Studies, there was little evidence that the three groups were targeting U.S. areas, as each was primarily interested in establishing fundamentalist administrations in their respective regions.[10]

In a 2013, Al Jazeera interview in Timbuktu, AQIM commander Talha claimed that his movement went to Niger, Algeria, Burkina Faso and Nigeria, to organize cells of AQIM. He explained their strategy: "There are many people who have nothing, and you can reach them by the word of God, or by helping them."[33]

According to London-based risk analysis firm Stirling Assynt, AQIM issued a call for vengeance against Beijing for mistreatment of its Muslim minority following the July 2009 Ürümqi riots.[35]

AQIM voiced support for demonstrations against the Tunisian and Algerian Governments in a video released on 13 January 2011. Al Qaeda offered military aid and training to the demonstrators, calling on them to overthrow "the corrupt, criminal and tyrannical" regime, calling for "retaliation" against the Tunisian government, and also calling for the overthrow of Algerian president Abdelaziz Bouteflika. AQIM leader Abu Musab Abdul Wadud appeared in the video, calling for Islamic sharia law to be established in Tunisia.[36] Al Qaeda has begun recruiting anti-government demonstrators, some of whom have previously fought against American forces in Iraq and Israeli forces in Gaza.[37]

AQIM endorsed efforts in Libya to topple the regime of Colonel Muammar Gaddafi, though it remains unclear how many fighters in Libya are loyal to al-Qaeda. Gaddafi seized on the expression of support and help for the rebel movement to blame al-Qaeda for fomenting the uprising.[38]