Albert Gustaf Aristides Edelfelt (21 July 1854 – 18 August 1905) was a Finnish painter noted for his naturalistic style and Realist approach to art.[1] He lived in the Grand Duchy of Finland and made Finnish culture visible abroad, before Finland gained full independence.[2]

Edelfelt was born in Porvoo, son of Carl Albert Edelfelt, an architect, and Alexandra Edelfelt, née Brandt. His parents were Swedish-speaking Finns and he grew up rather strained for money. He began his formal studies of art in 1869 at the Drawing School of the Finnish Art Society and continued as a student of Adolf von Becker (1871–73). He studied history painting at the Antwerp Academy of Art (1873–74) before becoming a pupil of Jean-Léon Gérôme at the École Nationale des Beaux-Arts in Paris (1874–78). In Paris, he shared a studio with the American Julian Alden Weir, who introduced him to John Singer Sargent. Later he studied at Saint Petersburg (1881–82). He married Baroness (friherinnan) Ellan de la Chapelle in 1888, and they had one child.[3] He also had romantic relationships with many other women.[2] 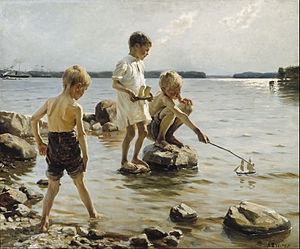 Boys Playing on the Shore

Edelfelt was one of the first Finnish artists to achieve international fame. He enjoyed considerable success in Paris, including a gold medal at the Paris Universal Exposition of 1889. His painted portraits of many famous people, including Louis Pasteur, Aino Ackté, and the Russian imperial family.[2]

In Finland, he was one of the founders of the Realist art movement in Finland.

He influenced several younger Finnish painters and helped fellow Finnish artists such as Akseli Gallen-Kallela and Gunnar Berndtson to make their breakthrough in Paris. Among his students was Léon Bakst. The painting of Louis Pasteur won him the Legion of Honour in 1886 at the exhibition at the Paris Salon.[4]

Edelfelt admired the poet Johan Ludvig Runeberg, who was a friend of the family. The company of Runeberg had a lasting impact on Edelfelt, who from time to time turned to scenes from Finnish history in his paintings. Edelfelt went on to illustrate Runeberg's epic poem The Tales of Ensign Stål.

In April and May of 1881, Edelfelt spent five weeks in Spain where he learned many new aspects of art and studied the phenomenon which is espagnolisme. This term focuses on the impact that Spanish influences had on France in the 1830s. Edelfelt was certainly a tourist throughout his time in Spain and took many photos and wrote many letters. Edelfelt's background history in Paris also impacts his journey through Spain because he is about to make a connection between the two countries and view Spain through the eyes of a Parisian. In Spain, Edelfelt also gained a deeper grasp of Gypsy culture and Orientalism which had always interested him.[6] In his black and white oil painting of a Spanish woman dancing, titled "Gitana Dancing I", you can see Edelfelt's focus of the decorative outfit that fits the culture and narrative of the time period in Spain. The poncho and hair piece specifically target the Spanish influence that Edelfelt was experiencing in his travels that differs from his experiences in Paris, and his roots from Scandinavian country, Finland.

Edelfelt's history also includes his involvement and friendship with renowned French biologist, microbiologist, and chemist, Louis Pasteur. One of Edelfelt's most important paintings is his portrait of Pasteur. Only recently discovered, Edelfelt's letters to his mother, written in Swedish, reveals evidence of Edelfelt's knowledge and work with Pasteur, stating Pasteur's working habits and traits of personality.[7]

This portrait of Pasteur is the most reproduced image of the scientist himself. It is the most popular portrait because it is unlike the many other typical portraits of Pasteur; where he is sitting plainly. This specific portrait paints him engaging with his environment and using the modern-day tools of his time. Pasteur actively involved himself, working with Edelfelt, in the creation of this painting. This portrait painted by Edelfelt impacted Pasteur's career as it painted his reputation towards the public positively. Depicting Pasteur in the midst of his works brought out aspects of himself and his work that the public would not see otherwise. This impacted his reputation and success and molded his future as he became one of the most successful scientists of the time.[7]

Albert Edelfelt was one of the most renowned Finnish artists. Edelfelt spent time in Antwerp and Paris, where he learned the practice of En Plein Air. He had come to a liking of En Plein Air because it was noticeable that illustrating contemporary reality rather than historical scenes were becoming popular during that time period.[8]He took on a focus towards naturalism and his paintings gave a direct reflection of the Finnish countryside and lifestyle.

Edelfelt also dabbled in religious painting, creating biblical scenes revolving around his comfort in the Finnish landscape. This can be easily interpreted in his 1890 painting, Christ and Mary Magdalene (insert painting link).

Edelfelt also had a successful career as an illustrator and portraitist.