Albion is a village in Orleans County, New York, United States. The population was 6,056 at the 2010 census. The village is centrally located in the county, the village is partly within the towns of both Albion and Gaines. It is the county seat of Orleans County and is about 30 miles (48 km) west/northwest of the City of Rochester. It is part of the Rochester Metropolitan Statistical Area.

The Albion area was first settled by European Americans in 1812. This area attracted few residents before the announcement, near the end of the decade, that the Erie Canal would be constructed through here. In 1822 an entrepreneur named Nehemiah Ingersoll bought much of the land near the planned intersection of the canal and Oak Orchard Road, the main north-south route through the area at the time. The property was soon subdivided, and the village, then known as Newport, began to grow.

Orleans County was created two years later. State officials considered both Gaines (then more populous) and Newport as the county seat due to their central locations within the new county. They chose Newport in 1826 due to its location on the canal and the West Branch of Sandy Creek, where a mill had already been established. The next year the village changed its name to Albion to avoid postal confusion with New York's other Newport, in Oneida County. In 1828 it was incorporated as a village.

Village of Albion Board of Trustees[edit source | edit]

The village elected a president. The following list is of those who held office.

The new village charter changed the term of president from one year to three years starting in 1879.

According to a new village charter, the name of the head of the village was changed from "president" to "mayor" starting in June 1951.

* Resigned as mayor to fill vacancy of village clerk-treasurer.

** Filled vacancy created by death of William A. Monacelli in June 1972.

**** Resigned from position as Mayor. 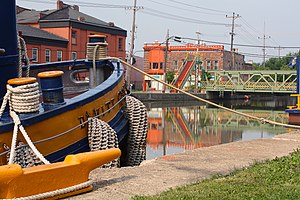 Tugboat and lift bridge on the Erie Canal in Albion

According to the United States Census Bureau, the village has a total area of 3.0 square miles (7.7 km2), all land.

The Erie Canal passes through the community.

Public transportation in Albion is provided by the OTS, which is part of the Rochester Genesee Regional Transportation Authority (RGRTA).[7]