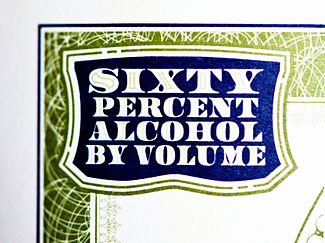 The alcohol by volume shown on a bottle of absinthe.

Alcohol by volume (abbreviated as ABV, abv, or alc/vol) is a standard measure of how much alcohol (ethanol) is contained in a given volume of an alcoholic beverage (expressed as a volume percent).[1][2][3] It is defined as the number of millilitres (mL) of pure ethanol present in 100 mL (3.4 fl. oz) of solution at 20 °C (68 °F). The number of millilitres of pure ethanol is the mass of the ethanol divided by its density at 20 °C, which is 0.78924 g/mL (105.3 fl oz/gallon). The ABV standard is used worldwide. The International Organization of Legal Metrology has tables of density of water–ethanol mixtures at different concentrations and temperatures.

In some countries, e.g. France, alcohol by volume is often referred to as degrees Gay-Lussac (after the French chemist Joseph Louis Gay-Lussac),[4] although there is a slight difference since the Gay-Lussac convention uses the International Standard Atmosphere value for temperature, 15 °C (59 °F).

Change in volume with increasing ABV

Mixing two solutions of alcohol of different strengths usually causes a change in volume. Mixing pure water with a solution less than 24% by mass causes a slight increase in total volume, whereas the mixing of two solutions above 24% causes a decrease in volume.[lower-alpha 1] The phenomenon of volume changes due to mixing dissimilar solutions is called "partial molar volume". Water and ethanol are both polar solvents. When water is added to ethanol, the smaller water molecules are attracted to the ethanol's hydroxyl group, and each molecule alters the polarity field of the other. The attraction allows closer spacing between molecules than is usually found in non-polar mixtures.

Thus, ABV is not the same as volume fraction expressed as a percentage. Volume fraction, which is widely used in chemistry (commonly denoted as v/v), is defined as the volume of a particular component divided by the sum of all components in the mixture when they are measured separately. For example to make 100mL of 50% ABV ethanol solution water would be added to 50mL of ethanol to make up exactly 100mL, whereas to make a 50% v/v ethanol solution 50 mL of ethanol and 50 mL of water could be mixed but the resulting volume of solution will measure less than 100 mL due to the change of volume on mixing, and will contain a higher concentration of ethanol.[5] The difference is not large, with the maximum difference being less than 2.5%, and less than 0.5% difference for concentrations under 20%.

Details about typical amounts of alcohol contained in various beverages can be found in the articles about them.

During the production of wine and beer, yeast is added to a sugary solution. During fermentation, the yeasts consume the sugars and produce alcohol. The density of sugar in water is greater than the density of alcohol in water. A hydrometer is used to measure the change in specific gravity (SG) of the solution before and after fermentation. The volume of alcohol in the solution can then be estimated. There are a number of empirical formulae which brewers and winemakers use to estimate the alcohol content of the liquor made.

The simplest method for wine has been described by English author C.J.J. Berry:[10]

One calculation for beer is[11]:

For higher ABV above 6% many brewers use this formula[12]:

Another way of specifying the amount of alcohol content is alcohol proof, which in the United States is twice the alcohol-by-volume (ABV) number. This may lead to confusion over similar products bought in varying regions that have different names on country specific labels. For example, Stroh rum that is 80% ABV is advertised and labeled as Stroh 80 when sold in Europe, but is named Stroh 160 when sold in the United States.

In the United Kingdom proof is 1.75 times the number (expressed as a percentage)[13][10]. For example, 40% abv is 80 proof in the US and 70 proof in the UK. However, since 1980, alcohol proof in the UK has been replaced by ABV as a measure of alcohol content, avoiding confusion between the UK and US proof standards.

In the United States and India, a few[which?] states regulate and tax alcoholic beverages according to alcohol by weight (ABW), expressed as a percentage of total mass. Some brewers print the ABW (rather than the ABV) on beer containers, particularly on low-point versions of popular domestic beer brands.[citation needed] The ABV value of a beverage is always higher than the ABW.

At relatively low ABV, the alcohol percentage by weight is about 4/5 of the ABV (e.g., 3.2% ABW is about 4% ABV).[14] However, because of the miscibility of alcohol and water, the conversion factor is not constant but rather depends upon the concentration of alcohol. At 0% and 100% ABV is equal to ABW, but at values in between ABV is always higher, up to ~13% higher around 60% ABV.[citation needed]